A few months ago Pierre Brunet, the absolutely wonderful man who operates 19 McDonald's restaurants in Montreal, approached me and Harold Cammy of our Parks and Recreation Department. McHappy Day will take place one again in May and for the two Côte Saint-Luc locations - Quartier Cavendish and the CSL Shopping Centre - Pierre suggested we come up with an idea where the proceeds could be directed. 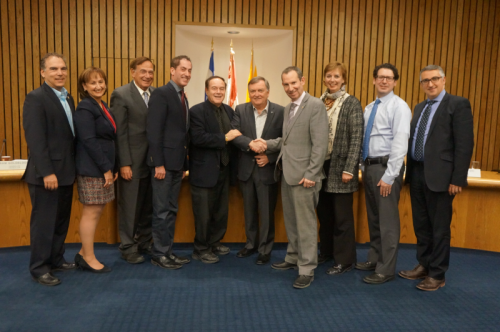 Pierre Brunet (center) confirms the new Bursary Program recently with Mayor and Council.
McHappy Day is a national fundraiser when McDonald's restaurants across Canada and their communities, employees, customers and special guests raise money together to help children in need. At the heart of McDonald’s community commitment is RMHC Canada, which is dedicated to giving sick children the one thing they need most: their families by supporting Ronald McDonald Houses and Ronald McDonald Family Rooms across the country. RMHC provides families of sick children with a home-away-from-home or a place of peace and calm within a hospital.
Mayor Mitchell Brownstein, members of city council and  our staff will volunteer at the two McDonald’s franchises in Côte Saint-Luc on Wednesday, May 3, 2017, which  will also mark the launch of the Pierre Brunet McDonald’s Parks and Recreation Bursary Fund. This is something Harold and I have been talking about for a few years now - helping families who cannot afford to register their child in a program and taking into account requests from children with special needs.
While details of the fund, including application forms, will be announced towards the end of the summer,  I am already pleased to say that we will connect this to our annual Golf Classic on July 6 and the CSL Men`s Club will be pitching in with their own donation as well. 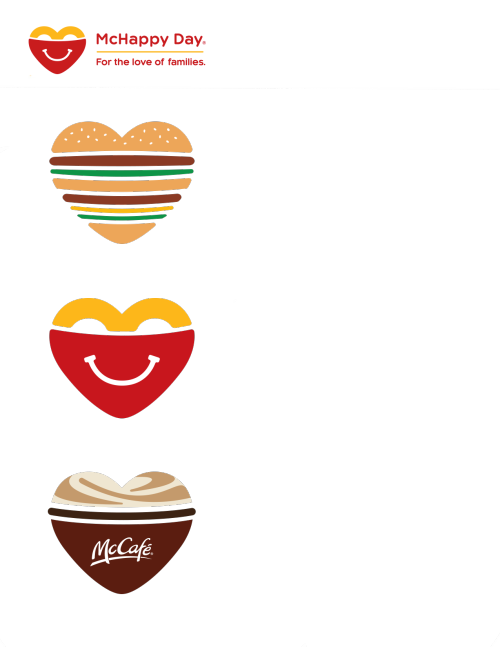 So please mark May 3 on your calendar and  join us at McDonald`s. Pierre Brunet has been a supporter of community activities in Côte Saint-Luc for many years. We’re very excited that through his efforts, more kids in our community will have a chance to participate in recreation programs.
Continuons la tradition dans les restaurants McDonald’s

The 35th annual Côte Saint-Luc Golf Classic, set for Tuesday, July 8 at Meadowbrook, promises to be a good one. I am co-chairing the event once again  with Councillor Sam Goldbloom. After less than 50 golfers participated last year, Sam and I set out to pump up the volume. Thanks to phenomenal staff support from Harold Cammy and Alvin Fishman, we will now have the highest number of players and prizes collected  and registered over the past five years. 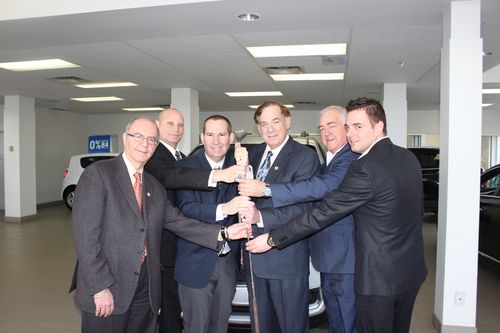 We also have a superb sponsor in Gravel Auto, which will make a brand new car available, and legendary jazz pianist Oliver Jones as our honourary chair. He will also be part of a foursome.

This is also an excellent opportunity to remind people what precious greenspace we have at Meadowbrook. Some members of Les Amis de Meadowbrook will even golf with us this year.

Foursome tee off early and we will all gather at the Aquatic and Community Centre for an awards banquet at 1 p.m.

Here are the details about the golf classic from  a previous blog. 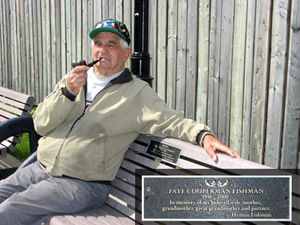 Hyman Fishman is a remarkable man. In his mid 90s, he lives alone on in an apartment on Sir Walter Scott Avenue. Hyman is in good physical condition and sharp as a whistle. For the past many years, from spring to fall, Hyman has spent a lot of time relaxing on a bench on Kildare Road near his apartment. This is where he and his late wife Faye Cooperman Fishman had many restful moments. Fay passed away in 2000. When Hyman heard about our bench dedication/restoration program he decided to honour his late wife by having a plaque affixed with her name on it.  The bench was also completely refurbished. There is another bench right next to it and Hyman says he will restore that one as well. Residents are encouraged to follow Hyman's lead and either restore an existing bench or help us order a new one. Please call Regine at 514-485-6800 for more information. 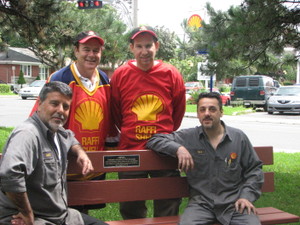 A bench at Yitzhak Rabin Park, at the corner of Westminster Avenue and Guelph Road, has been dedicated in the memory of the late Kris Demircigil by Raffi Abikian of Raffi’s Shell Station. Kris was Raffi’s father-in-law and business partner for 20 years until his passing on January 12, 2007.  Pictured seated are Raffi Abikian (left) and mechanic Zareh Haciartinian, who worked with Kris for 15 years. Standing behind the bench with me is  District Councillor Allan J. Levine. As the councillor  responsible for the sponsorship portfolio I can report that there have a number of new requests within the city by individuals wishing to dedicate a   benches. I encourage those interested in finding out  more to  call 514-485-6800 ext. 1802. Help improve  the public spaces in your community by sponsoring the restoration of a Côte Saint-Luc city bench or the purchase of a new one. Each new or restored bench will be affixed with a beautiful bronze plaque.  This is a perfect opportunity to honour a loved one or memorialize an important birthday or anniversary while beautifying your city. The prices are $500 for a restored bench and $2,000 for a new one.

On April 3 I provided an update on the progress my Toponomy and Sponsorship Committee to members of the Côte Saint-Luc Senior Men’s Club. I was joined at the event by Brad Horner, who is working on sponsorship dossiers for the city’s Public Affairs and Communications Department. Horner listed a number of high profile city events that are collaborating with corporate sponsors. I explained that the city has decided not to hire a specific fundraiser. Instead, departments are developing their own strategies. For now, the city is concentrating on the sale of trees for $500 and park benches for $2,000, dedicated to the memory of loved ones. After my speech, I was approached by several members interested in sponsoring park benches. I told everyone that a resident, who is asking for anonymity, has provided us with $2,000 to buy new baby swings in Rembrandt Park. They will be dedicated in the memory of children who perished during the Holocaust. To find out more about naming rights and sponsorship opportunities call Darryl Levine at 514-485-6800, ext. 1802.

After unveiling what I consider to be an innovative blueprint to facilitate opportunities for donations, naming rights and sponsorships as ways of funding the growth and creation of new programs and facilities in the Côte Saint-Luc, we had to put up with some unkind words from the likes of Gazette Newspaper columnist Henry Aubin and Pointe Claire Mayor Bill McMurchie,

A committee I chair worked for almost two years on developing a comprehensive set of guidelines that will encourage new donation opportunities.

This is a new step for the City of Côte Saint-Luc. We are a community composed of individuals, families and corporations that care deeply about the city we live in. Now we have clear guidelines to accept their donations, whether it be a park bench, swing set, works of art or monies to help build a new indoor swimming pool.

As the councillor responsible for issues related to toponymy, corporate identity and communications in the city, I worked with senior staff members, the other members of council and a number of residents with expertise and experience in this area.

Whether we are talking about the children’s section of our critically acclaimed library or a field at Pierre Elliott Trudeau Park, there are some wonderful sponsorship opportunities available. The option of sponsoring a city event, such as a concert or winter carnival, also exists. We hope that a large number of people with connections to Cote Saint-Luc will wish to exercise this new option.

I have already been approached by a resident who wishes to fund the purchase of some new equipment in a city park. The Côte Saint-Luc Volunteer Citizens on Patrol (vCOP) program is functioning thanks to the generosity of two car dealerships – Claireview Leasing and Toyota Montreal Nord (owned by resident Jean Alloul) – which have thus far underwritten the costs of the two vehicles used to patrol the streets.

All proposed projects will require the approval of council. There are many people whose families have a long association with our community. We want these people to know that the door is open for them to leave a legacy for a friend or a relative.

I have always enjoyed and respected the writings of Aubin. When he called to talk to me about the issue he was very positive. He said he thought it was great idea. Now I am a journalist myself, so I generally know how to judge the person interviewing me.I fully expected a supportive editorial from Aubin. Instead, he sandbagged us. And to make matters worse, he decides to quote one person---not me whom he spent probably an hour's worth of time with - but a negative mayor in Bill McMurchie who usually has nothing positive to say about anything. What does McMurchie know about our plan? Did he read it? If someone offered him six figures for naming rights to a city facility, would he turn it down? Was he not one of the suburban mayors complaining that we are overtaxed? Why could he not throw some support behind a municipality that demerged like Pointe Claire that is looking into some creative financing? I would be very happy to send him a copy of our guidelines. McMurchie's unfounded criticism of this initiative is shameful