In Lies My Father Told Me, noted Montreal-born actress Marilyn Lightstone plays one of the starring roles of Anna Herman.

Co-producer Harry Gulkin says Lightstone was right for the role of the mother. Her strength as an actress had been tested in many demanding stage and film roles. In Lies My Father Told Me, her mobile features express and reflect all the trials and tenderness felt by a young woman who is at once wife, daughter, and mother.

Lightstone, a multi‐talented artist, won accolades for her work as Annie . She was also seen in such films as "In Praise of Older Women" (1978), and "The Tin Flute/Bonheur D’Occasion" (1983). She distinguished herself in theatre, starring as Leah in the Los Angelesproduction of "The Dybbuk" playing in New York opposite Lee J. Cobb in "King Lear" and as Masha in Chekhov's "The Seagull" at the Stratford Festival. On television, she co‐starred as Miss Stacy in both the Anne of Green Gables and Road to Avonlea series and made guest appearances on Cheers, Cagney and Lacey, Street Legal and E.N.G. She has written scripts for television and her first novel, Rogues and Vagabonds, received much acclaim. She was the founding "Voice of Bravo", Canada's NewStyleArts Channel where she currently hosts a series called Playwrights and Screenwriters.

Lightstone grew up in Montreal, initially in the Plateau on Clark Street and then in Snowdon. She got an Arts degree from McGill and was a member of the second graduating class of the National Theatre School, moving to Toronto in 1964

What effect did being part of the cast of Lies My Father Told Me have on her career? "Lies My Father Told Me was my first film role after eight years of stage work and it established me as a film actress," she said. "That is not just because I was on the screen, but because it was such a fine and special film and one which would continue to be meaningful, not just for the Jewish community, but in the history of Canadian film. In other words, it had legs."

Lightstone (pictured below in a scene from the movie) is thrilled about the DVD release. "People have been wanting their own copy for years and now it is finally possible," she remarked. 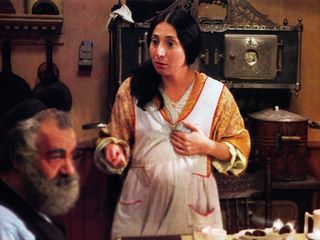 It has been a few years now since Lightstone, now 69, had her last TV role. "There are very few roles for women my age, and when there is one they're usually looking for a tsekrocheneh oldster , preferably one with a Yiddish accent who can play stereotypical bubbies. To cast that, they can do far better than me because  I don't fit the bill, and it's not that interesting to me.

Lightstone says she spends half of her time researching, writing and recording her radio show, which is on for two hours every night and which can be heard at www.classical963fm.com between 11p.m. and 1 a.m. Toronto time anywhere in the world. The other half is spent in her studio where she work on the visual arts - painting and photography, and sometimes the two together. "When I was a child I thought I was going to be a painter," she says. Samples of her work can be seen at www.marilynlightstone.com.

"Rest assured, that should something really interesting come along I would be most interested in acting again, but I'm not sitting at home waiting for the phone to ring," she says.

Please read the article below about Lies My Father Told Me and the memories it evoked about my own grandfather.

Posted at 09:47 AM in Film and Leisure, Personal Memories | Permalink | Comments (1)

When I was provided with an advanced copy of the DVD version of Lies My Father Told Me, I was not sure whether I had actually seen the classic 1975 film which was shot in Montreal and went on to win a Golden Globe Award as best foreign film. It also captured six Genies and garnered an Oscar nomination. Well, it was quite clear to me that I never did see it. I was 12 years old at the time of its initial release.

Set in 1920s Montreal, it recounts a slice of the Jewish immigrant experience in this city and focuses on a loving relationship between six-year-old David and his Orthodox "story-teller" grandfather. I must say that I was touched by this film and in many ways it brought me back to the days when my grandfather, the late Lewis Sherwin (pictured with me below about 20 years ago) spent so much time with me. Grandpa Lew passed away just over 15 years ago. He was 94 years of age and spent his last days at the Veteran’s Hospital in Ste. Anne de Bellevue. I think one of his proudest moments was when he got to introduce me as a guest speaker at the Cöte Saint-Luc Senior Men's Club. I was working for the Canadian  Jewish  Congress at the time

A veteran of both the first and second world wars, Grandpa Lew was born in Edinburgh, Scotland. He came to Canada after the war, raised a family and made his living as a pharmacist. In fact he worked behind the counter filling prescriptions until his early 90s. Like David’s grandfather in Lies My Father Told Me, Grandpa Lew was a storyteller. We spent an enormous amount of time together when I was growing up. While watching the DVD, all of those memories came flowing back. Suddenly I missed my grandfather a lot. Boy what I would not give to be able to sit down at a table and just talk about politics or hear some of his war stories.

On Jan. 26 (7 p.m.) CinemaSpace at The Segal Centre for Performing Arts (5170 Côte-Ste-Catherine) will host the formal launch of the newly restored 1975 classic film’s DVD, with a repeat the following evening at the same time. The DVD, which has many extras, like a photo gallery, cast lists and menus, is being released across Canada by New Jersey-based Ergo Media.

"We are filled with pride at this opportunity to host the first public screenings of this restored film classic," said Bryna Wasserman, the Segal Centre’s Artistic Director. "Lies My Father Told Me is one of the great Canadian films. It is remembered as a milestone in Canadian cinema."

Harry Gulkin, the co-producer of the film, is equally excited. "I know that new audiences will receive it with the same joy and enthusiasm that greeted it when it was first released," said Gulkin, a former executive director of the Saidye Bronfman Centre and at the age of 82 recently retired from the Quebec government agency called SODEC that invests in film and television

"Because this is a period film set in the 1920s it remains as contemporary today as when it was released 35 years ago," Gulkin told The Jewish Tribune. "It really is not dated and now that it is on DVD I believe it will have a long life."

On the DVD, Gulkin recounts some of his recollections about the making of the film. He will be on hand during the film’s screenings in CinemaSpace for Q&A sessions. 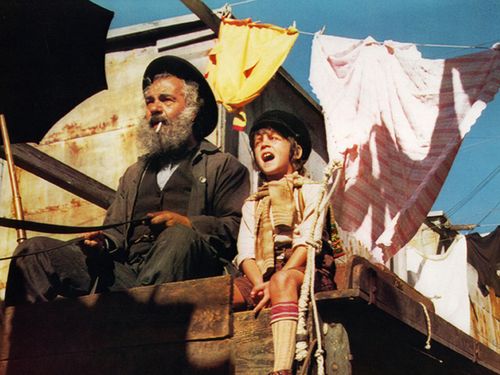 The film was directed by Academy Award-winning Czech filmmaker Ján Kadár ("The Shop on Main Street") and starred Len Birman, Marilyn Lightstone, Jeffrey Lynas, and Yossi Yadin (as Zaida), with screenwriter Ted Allan playing the role of a revolutionary tailor. Lynas, who played young David, was nominated for a Golden Globe as best supporting actor.

That the launch of the DVD is taking place at the Segal Centre is most appropriate. Indeed, in 1984 Dora Wasserman collaborated with Allan to adapt his short story into a Yiddish production at the Centre. Allan played the role of narrator. Twenty years later Dora’s daughter Bryna successfully adapted the play into a musical, also at the Centre. The version being screened at CinemaSpace is the original English edition, but the DVD has both French and English audio tracks. The film runs 104 minutes.

The film was restored by Gerry and Hila Feil, work that Gulkin says was essential in order for him to greenlight the project.

In Lies My Father Told Me, David lives with his Canadian-born parents, his grandfather Zaida, a junk peddler who emigrated from Russia, and Zaida’s aging horse, Ferdeleh. The two characters are pictured above.  David’s father is a modern materialistic man of science who dreams of striking it rich by designing unique inventions. Zaida, on the other hand, is a humble man who works hard for his living and patiently awaits the arrival of the Messiah. Intuitively, David responds to his grandfather’s love. Every Sunday, David travels the back alleys of author Ted Allan’s Montreal with Zaida and his horse Ferdeleh and carriage. Zaida answers all of David’s questions about the world in terms of the Creator and the miracles that he performs. But this winter there are no miracles to spare David the pains of growing up.

It  was Gulkin who took Allan's screenplay version to Kadár, who was enthusiastic on all counts, and excited about directing the film. Lynas of Toronto was making his acting debut. He was discovered in an anteroom, waiting for his mother who had brought another son to a casting session in a Toronto hotel suite. The casting proved to be inspired as young Jeffrey brought a native innocence and ingenuousness to the role.

Get a copy of this marvelous film and if you were fortunate enough like me to have a grandfather whom you still have cherished memories for, consider yourself lucky.

Lies My Father Told Me was shot principally on Panet Street in Montreal, about two blocks from where Allan, grew up, and in Mount Royal Park. For more details about the DVD go to http://www.LiesMyFatherToldMeDVD.com.