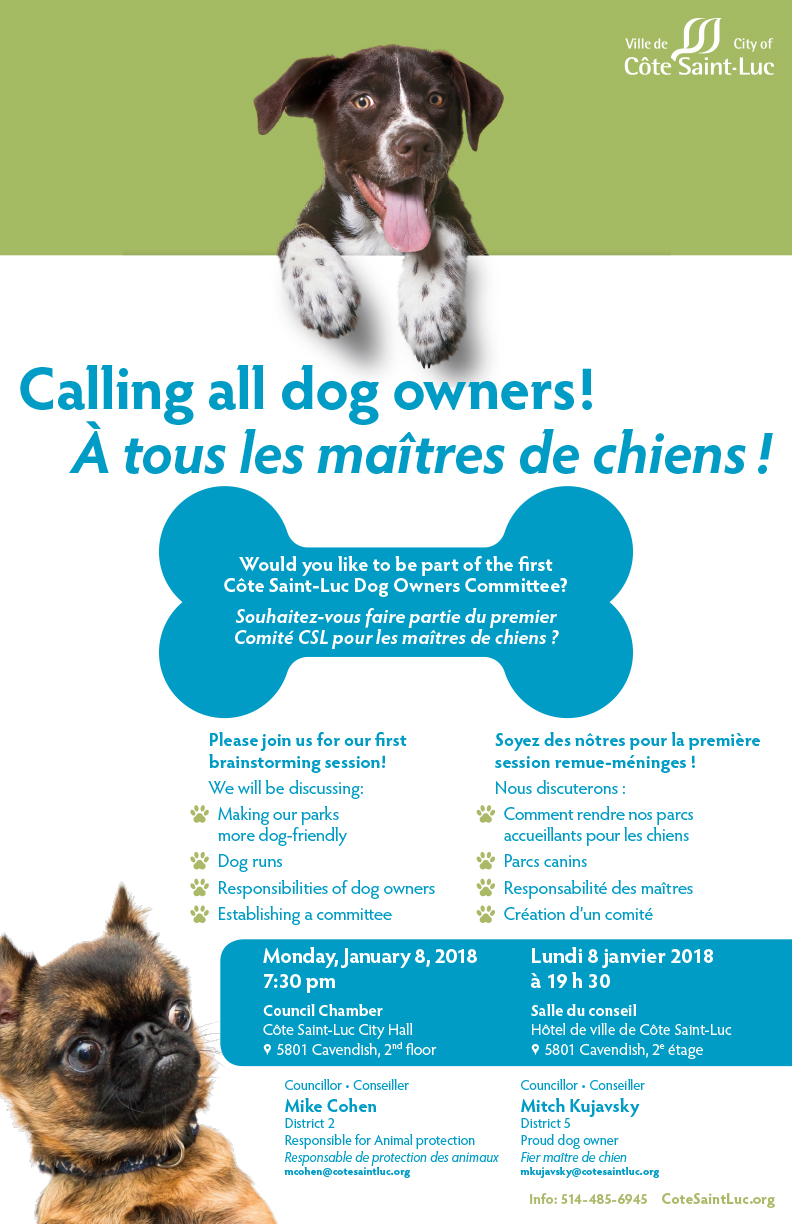 Looking out for the little guy: Our main dog run will be partitioned for small and larger dogs

As the city councillor responsible for Animal Protection, I am pleased to announce that after a period of consultation our main dog run on Mackle Road will soon be sub-divided for large and small canines. 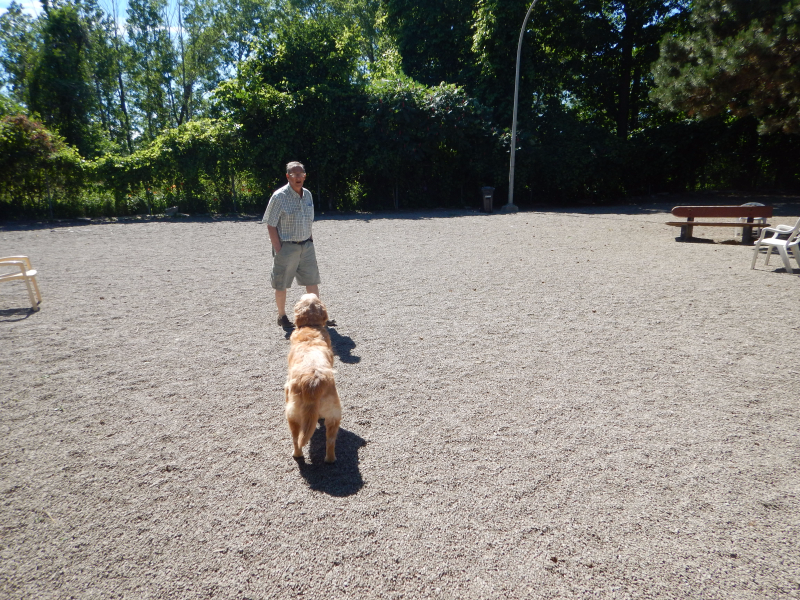 Our main dog run has lots of space.

Over the past year I have received many complaints that smaller dogs were being attacked by larger ones. While the incidents might no have been that frequent, the fact this was happening at all was of great concern. The vast majority of our dog owners are responsible individuals. At the dog run itself, people get along nicely and so do the animals. It is wonderful to see them run free and play together. But we have heard stories of dog owners who are allowing what amounts to acts of bullying by their pets. In some cases, small dogs have been seriously injured.

More than a year ago I established an ad hoc dog run advisory committee. I’d like to thank Abe Haim and Jason Balinsky, two of my constituents who took a leadership role from day one. They have helped steer this discussion in the correct manner, talking to owners at the dog run and holding two public meetings at City Hall. 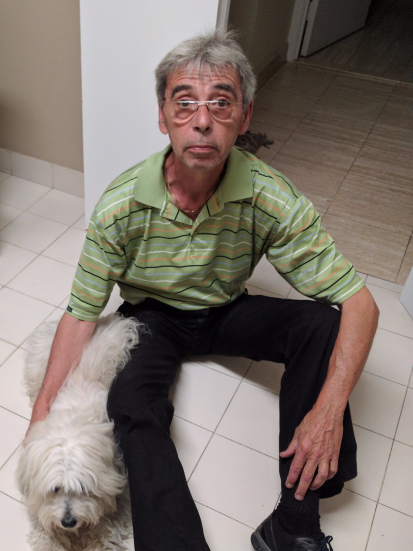 Hats off to Beatrice Newman, our director of Public Works  and foreman Thierry Dhaisne for working with us on this project. In the next few weeks fencing will be installed. Naturally, the larger dogs will get more space. The area itself is quite large.

This was the prudent thing to do.

We also hope to have a decision made soon on a second dog run on the other side of the city, near Meadowbrook Golf Course. Councillor Steven Erdelyi has been leading those discussions.

The other night I met with a number of dog owners on Sir Walter Scott Avenue. They’d like to see more access for dogs in our parks and I agree. In fact, this is an issue I have been advocating for many years and last spring we made a positive first step. While dogs are  still not allowed in most public parks and playgrounds  exceptions have now been made at  Aaron Hart Park along David Lewis St., Harold Greenspon Park on Borden Ave., the green space between Marc Chagall Ave. and the parking lot of the Bernard Lang Civic Centre soon to be renamed Library Lane, the green space on Baily Rd. between Northluc and Cavendish, the green space on Baily Rd. between Lyndale and Glencrest, and a section of Kirwan Park between Blossom and Wentworth.   Council wants to evaluate how this process went first before deciding on any future adjustments.

Harvey Fox, a resident of a 220-unit apartment complex on Adalbert Ave., says there is a tenant in
his building who re- fuses to leash his problematic dogs, but police won’t accept citizen-captured
video footage, witness testimony or photo- graphic evidence as an enforcement tool. “He just
lets them run wild,” Fox told the Côte St. Luc city council on January 23, describing the dogs as
pit bull and husky mixes. He said that he has made numerous complaints to Public Security and
police, but in order to enforce the city’s leash by-law “they need to see it them-
selves.”

Fox said the man’s dogs have attacked his own on January 4 and when he tried to intervene “like a
rag in a thunderstorm, I was tossed around.”

Mayor Mitchell Brownstein noted that this type of incident can be reported to po- lice, but, Fox
replied, there were no dam- ages. He said the problem is that police are waiting until someone gets
hurt rather than responding to complaints.

The man was caught once, said Fox, but it has not deterred him from walking his dogs without a
leash. It has continued to be a problem, he noted, since last spring. Fox said he tries calling 911
and Public Security when he sees the man walking his dogs off leash, but “they don’t want to deal with it.”
Fox admitted that it is a difficult case to enforce, but it would be a lot easier if police could,
at the very least, rely on video footage captured by citizens.

Brownstein said he will look into boost- ing patrols around specific times. Brown- stein said he
will have the city’s director of city services look into what can be done. He said the city will
look into what type of evidence is accepted and “we will work to- gether with you.”

Councillor Mike Cohen, responsible for animal welfare in the city, thanked Fox for bringing the
problem forward. He said there was a similar issue on Rembrandt Ave. where the dog owner was
finally caught and ticketed. It worked for a while, but then the owner was eventually seen walking
the dogs off leash again.

“This is unacceptable,” said Cohen, call ing it a typical example of the pet owner being the
problem, not the pet. “The owner has got to take responsibility. Please continue to let us know and
I send that message out to anybody in the community who is experiencing a similar situation be-
cause most dog owners in Côte St. Luc are very responsible.”

First Animal Protection Forum in CSL is Monday, May 5

On Monday, May 5 (7 p.m.) I will host the City of Côte Saint-Luc's first ever Animal Protection Forum in the multi-purpose room of the Eleanor London Côte Saint-Luc Public Library.

Since Mayor Anthony Housefather handed me an actual portfolio dealing with Animal Protection in January, I have been working hard on the dossier. I had already been acting as the formal liaison on council to the Côte Saint-Luc Cats Committee, an all volunteer group which rescues homeless cats and tries to find homes for them. 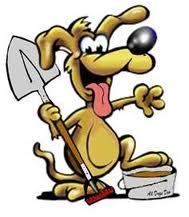 Many dog owners have approached me these last few months, so I felt there should be a forum for them in public to discuss important issues. Therefore on Monday it will literally be raining "cats and dogs." Members of the Côte Saint-Luc Cats Committee will be on hand to share how we have proceeded over the last few years and what our immediate objectives are. Shelley Schecter, the heart and sole of our committee and head of Educhat, will speak. She is also a dog owner. Bram Eisenthal, the publisher of the  very unique Precious Pets Newspaper, will on hand. He recently launched pet grieving sessions. Only a pet owner can understand how devastated you can be when your cherished dog or cat dies. Newly elected D'Arcy McGee Liberal MNA David Birnbaum has accepted my invitation to attend. Now that the Liberals are back in power, we can share with David important animal welfare issues he can bring to Pierre Paradis, who as Minister of Agriculture, oversee the animal portfolios. 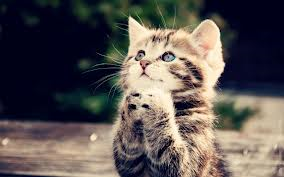 Monday's sessions will be an opportunity to share ideas. The topic of dog runs will no doubt come up,  as will responsible pet ownership (i.e. picking up after your pet), licenses, adoption opportunities and other issues.

Please feel free to join us. 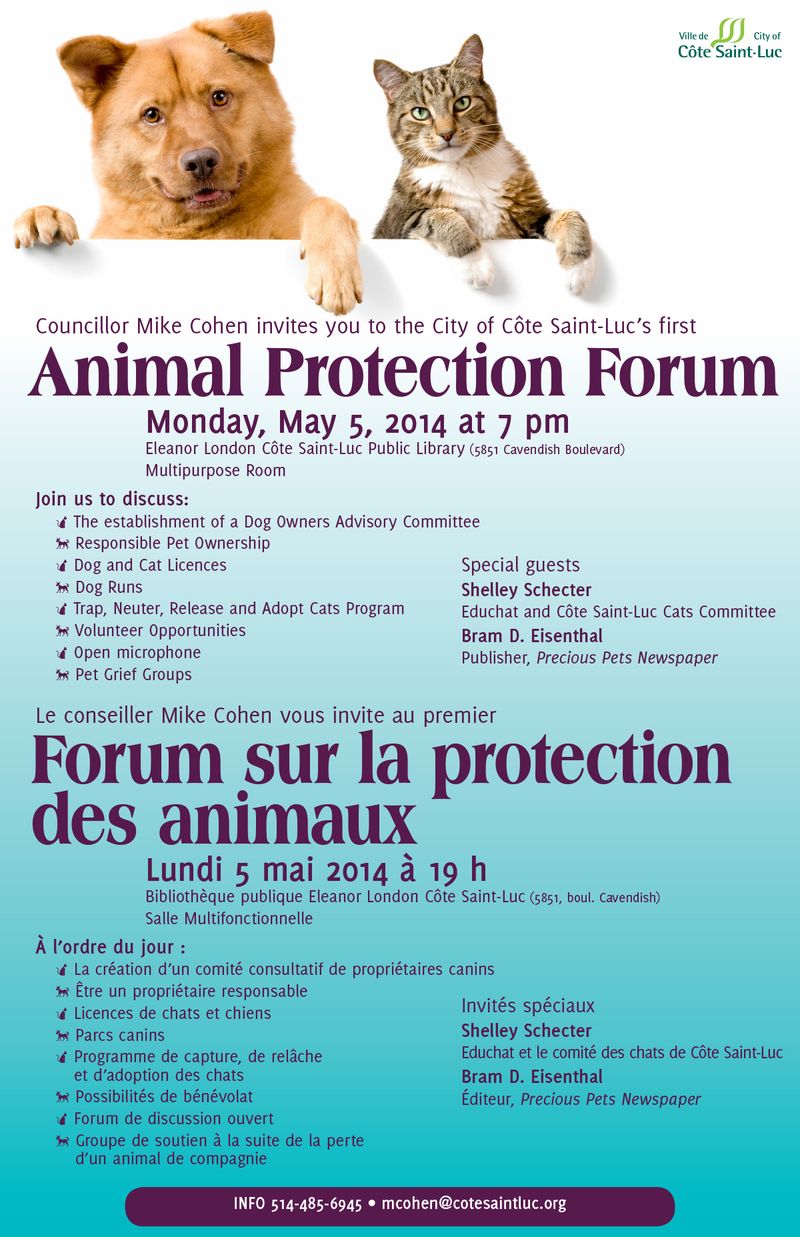