D'Arcy McGee will have excellent representation in Elisabeth Prass

As expected, the Coalition Avenir Québec swept back to power with a huge majority in the October 3 provincial election. That was a foregone conclusion.

In my riding of D’Arcy McGee, it looked like  we might have had a race on our hands when the campaign began. There was so much anger over how the Quebec Liberal Party handled Bill 96. How many people did I run into who told me they would be voting for either the Canadian Party of Quebec, the Conservative Party or Bloc Montréal? 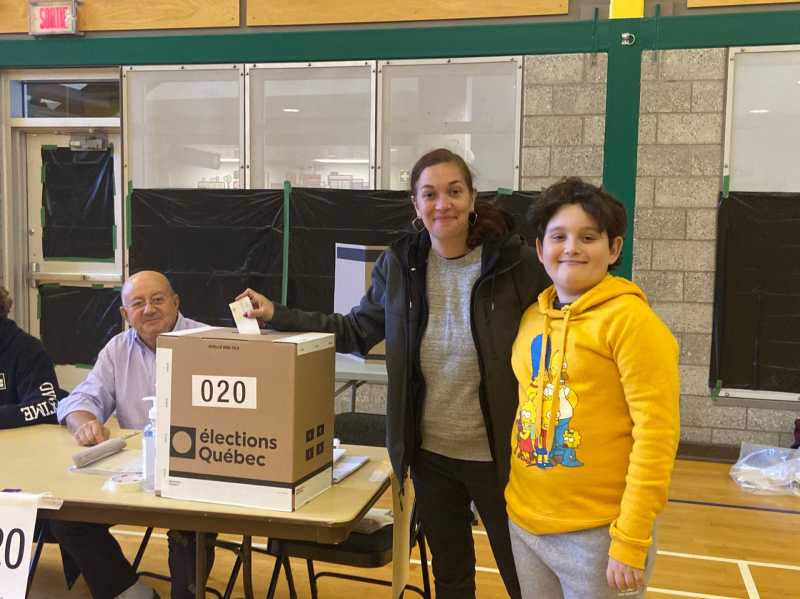 Elisabeth Prass, with her son, at the voting station.

In the end, the Liberals’ Elisabeth Prass won with more than 52 percent of the vote. Unquestionably, the constituents of D’Arcy McGee  are in good hands. I worked closely with Prass during the time she ran the riding constituency office. She left that post a year ago for the corporate sector so she was not on the job when her predecessor David Birnbaum committed a career ending move by proposing inexplicable amendments to Bill 96 which infuriated the anglophone community.  David is a wonderful human being; someone I consider a friend. He loved his role as an MNA and had no intention of retiring. Unfortunately he had to walk the plank for his misdeed.

The Liberals did not get shellacked as badly as I anticipated in this election. Frankly, I did not  expect them to get more than 20 seats. Instead of focusing on how the party handled Bill 96 in the past year, what will be their position in the next mandate?  The CAQ may have a massive majority, but they could be looking at losses at the court level for Bill 40 (abolishing school boards), Bill 21 (secularism) and yes even Bill 96. Should that occur, the Liberals will benefit as the CAQ licks its wounds.

In this election, the Liberals kept all of their anglo strongholds. If Dominique Anglade keeps her job as leader, she will need to find a way to  bring the francophone population back to the fold. It is safe to say that no matter what position she takes, anglos will not walk away from the brand.

What will become of the Canadian Party of Quebec, Bloc Montréal and the Conservatives? If ever there was an opportunity for anglo rights parties to win a riding, this was their moment. Yet the CAPQ and Bloc Montréal did not get any support at all. Four years from now, with the CAQ completing a second mandate, anglos will not want to roll a dice on any party other than the Liberals.

The Conservatives opposed Bill 96, but they did not oppose Bill 21 - a big mistake.

As a member of Côte Saint-Luc City Council, I was happy to sit on an ad hoc committee with Councillors Dida Berku, Andee Shuster and Steven Erdelyi. We met with four candidates - Prass, Bonnie Feigenbaum of the Conservatives and Marc Perez of the CAPQ, Joel DeBellefeuille of Bloc Montréal. I did podcast interviews with each of them as well, in addition to the Québec Solidaire candidate. We were engaged. There was one Zoom debate with the candidates, but it did not have a large audience nor an impact on the vote.

D’Arcy McGee has excellent representation in Elisabeth Prass and I look forward to working with her.

You can see the election results here and follow the instructions to get to D'Arcy McGee.