Tribute: Beryl Peletz was a stalwart with the CSL Men's Club and a true mensch

While I knew Beryl Peletz was in his 90s, he was one of those individuals whom I thought would simply live forever.

I had the pleasure of being his city councillor in Côte Saint-Luc District 2 these past 16 years. He and his wife Miriam were model constituents, always providing  timely advice. When there was an issue they would call me together, with one of them doing the talking and the other sharing comments from the background.

When it came to election time and campaigns, Beryl would give me the ultimate compliment when I knocked on his door by saying, “you don’t need to ask our vote…it is guaranteed.” 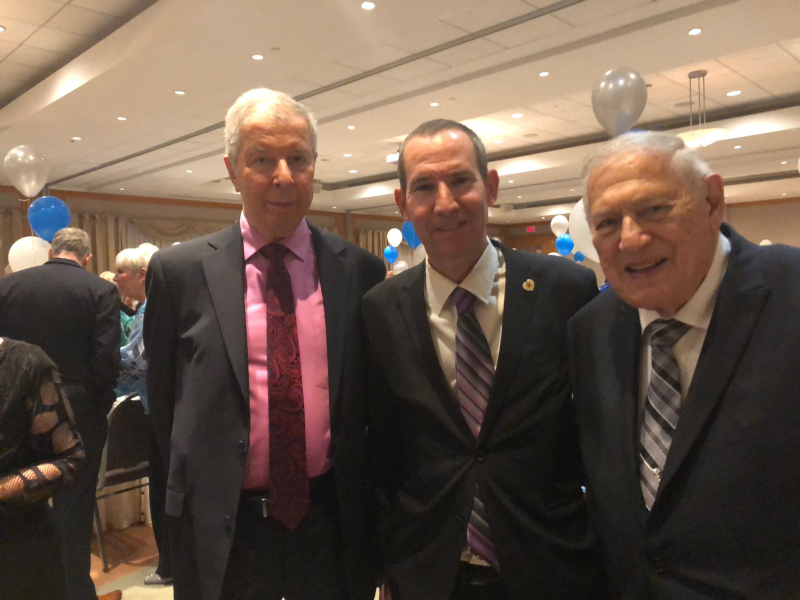 David Haltrecht and I with Beryl (right) at the 2018 Men's Club Dinner.

Beryl was a true leader  with the Côte Saint-Luc Men’s Club.

“There are no simple words that I can use to pay tribute to Beryl,” said Sidney Margles. “There can only be superlatives. Beryl only had friends. He was always there. A pillar of the Cote Saint-Luc Men’s Club, he will be sorely missed.”

Irving Leiner called Beryl “a treasure whose absence will be deeply felt by many. I had the privilege of meeting and knowing Beryl when I first joined the Men's Club. His friendship and support for me was always evident and his willingness to help and take charge of anything that was required for our live evening events contributed to making these events enormously successful.”

Syd Kronish noted that Beryl was  his key man during his eight years years as a member of the executive, including four as president. “He assumed with pleasure the job of heading the breakfast meetings which fed 200 to 275 members every month.” He said.  “He also was the leader of our monthly trips to Morrisburg to see some wonderful live shows what a man, always ready to help wherever he could. “

Phil Matlin resided in the same condo as Beryl on Rembrandt Avenue . “He was one of a kind,” he said. “When I moved into the Briar Cliffe I was elected to the board the same year as Miriam was. Beryl introduced himself to me as Miriam's husband. It didn't take very long to become friends. Beryl was always there for me and many others. We lost a man who was the definition of mensch. There will never be a man quite like Beryl.”

Mannie Young, another former Men’s Club president, wrote , “As I sit here writing this obituary , I am shivering not yet realizing that my mentor has left me.”

Debbie Adelstein-Posner called Beryl “ aremarkable man with an outstanding personality. He made everyone who met him feel important and loved and valued. Beryl was a pillar of his community, admired and respected by the many people he had come to know over his years particularly those in the Men’s Club.”

Adelstein-Posner said that when  her  father stopped working and could not longer golf (his joy in life), Beryl reached out and invited him to community outings, to lectures and bridge games. “He let my father know that he was there for him at any time for any social need,” she said. “Beryl is leaving his legacy in the heart of my friend, who would, and does, go to the end of the earth for me, her friends, acquaintances and yes, without question, strangers.”

Donations in his memory may be made to the “Abe Beryl Peletz Memorial fund” for Pancreatic cancer c/o the Jewish General Hospital Foundation (514) 340-8251 or the Sam Klinger chapter of Montreal Hadassah WIZO Organization of Canada (514) 933-8461.

Our sympathies go out to his family.