On November 1, a significant section of District 2 experienced a power outage.

The power was restored within 24 hours. A few weeks later a planned outage was necessary to do what we thought were final repairs.

Regrettably, that was not the case and on Tuesday, December 21 (11 pm) the power will be shut for at least nine hours. Over 450 users on  Merrimac, Kildare, Rembrandt, Marc Chagall, Sir Walter  Scott and  Ilan-Ramon will be affected. This will likely throw out the lights at Cavendish/Kildare as well. If you did not get a Hydro robo-call then you will not be impacted. 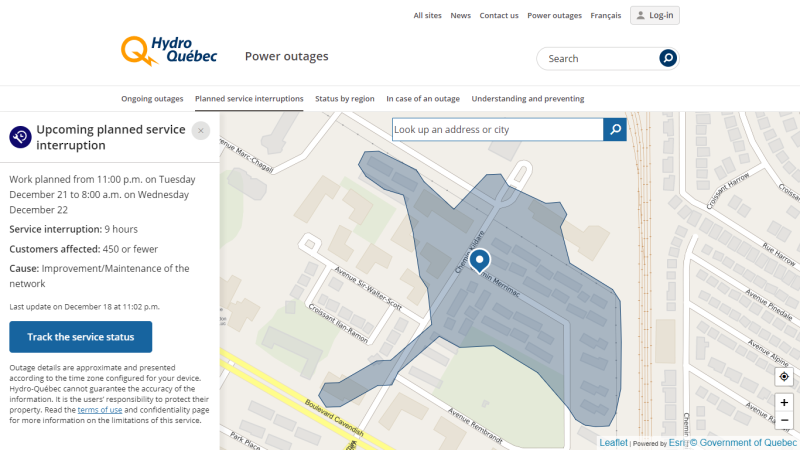 Hydro officials told me today that workers will do a joint operation at multiple locations to change transformers and breakers t. This work has to be done to prevent a risk of failure that can cause an outage similar to the one we had in November. "We don’t want that to happen in the winter months to come," a Hydro spokesman told me. "Although there is never a good time for a planned outage, the good news is that they are able to do the work at night, which is not always the case! Our crews will do their best to finish the job before 8 am."

The Hydro spokesman said he understand that residents will be without heat during the night.  He would suggest increasing the temperature a little during the day before, so it takes a longer for the residences to cool down.   For more information, please refer to the measures described in this link.

Overnight parking will be tolerated, so if you park indoors and need to get in or out at a certain time you might want to take advantage of this option. Also keep in mind that your freezer is fine for 24 hours, but the fridge being off for nine hours  might spoil some food.