If you missed my June 7, 2021 District 2 Virtual Town Hall Meeting, I have made a summary below and thanks to the work of Darry Levine from the city here is a video recording

I am proud to have created this initiative when I was first elected in the fall of 2005 as a way to maintain closer relations with constituents and talk mainly about issues related to the surrounding neighbourhood. Since then most other members of council have adopted this approach. Due to the COVID-19 pandemic, the last two such meetings have been held virtually. 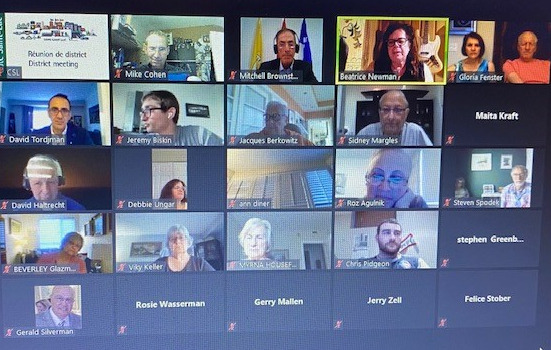 Joining me at the meeting was Mayor Mitchell Brownstein, Director of Public Works Beatrice Newman, Arborist Christopher Pidgeon and Councillor David Tordjman, who as chair of our Traffic Committee has worked closely with me on changes to Marc Chagall Avenue.

WORDS FROM THE MAYOR

Mayor Mitchell Brownstein gave a COVID-19 update, noting how challenging the past 15 months have been. He is happy to see new picnic tables setup outside in certain sections of the city, including near the Quartier Cavendish. There was an overview of the new Bill 96 language legislation. The city will adopt a resolution to maintain its bilingual status. The mayor shared his concerns over the acts of antisemitism that occurred in recent weeks and he thanked the police for their good work. He also reminded everyone that those aged 70 or over will be able to vote by mail in the November municipal elections. Finally, on the transit front, discussions regarding the extension of Cavendish Blvd. do continue.

THE LOT ON MARC CHAGALL

By now we had hoped to have beautiful greenspace on the lot on Marc Chagall. The land was used the last three years by the owners of the Equinoxe in order to keep the workers from taking spots on the street. It was the Equinoxe’s responsibility to return the land back to its original use before we could beautify it.

The contactor did the hydro seeding last fall. It should have been ready for the spring, but it did not take. So hydro seeding was redone in May. The company that did the hydro seeding is aware this method is slow and they are still hoping for more growth. They are watering regularly and hope to see results soon. The warm and dry weather has definitely been working against them and it looks like it will continue. If growth is not sufficient soon, they will explore other alternatives. I am deeply disappointed with these turns of events. Our Public Works and Urban Development Departments did everything they could, in the hopes that the contractors hired by the Equinoxe would have completed this properly. I visited the area this week in the company of some neighbouring residents. The land was left in unacceptable shape, with an endless array of rocks, stones and debris. It is not what the Equinoxe promised us when we leased them the land. It has hardly been returned to us in the same way they found it. Young families in particular patiently waited to have this field available for their children to play on. Until the debris is cleared, it is safe to walk on, but not to run. 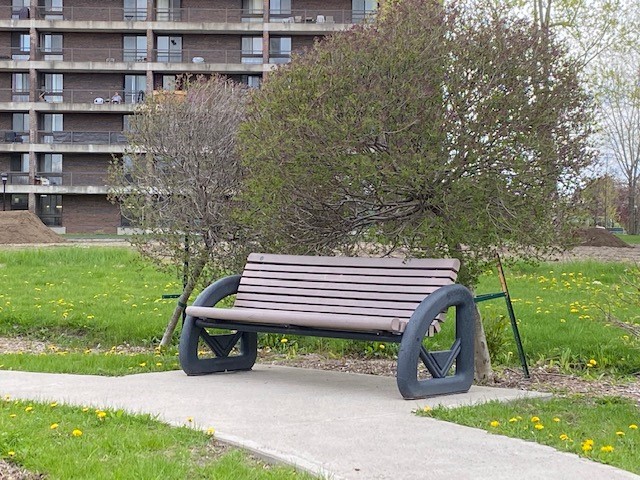 By now our plan was to have new benches, picnic tables, trees, bushes, flower beds and some pathways in place. .

Beatrice Newman said that efforts will be made to start doing some work on the land soon and install some benches an trees, but in order to avoid more messy construction the major undertakings may have to wait until early fall so as not to inconvenience anyone. I received several calls from residents after the meeting. They cannot wait for more nice places to sit this summer.

Myrna Housefather suggested a particularly octagon shaped bench, which would be more comfortable for seniors. Ms. Newman will look into that

Next door, we have the still relatively new paved walkway to Isadore Goldberg Park. This was never accessible to anyone other than for the Kildare Road and Sir Walter Scott Avenue residents. We have planted new tree and flowerbeds, removed heavy bushes, installed new lighting and added new park equipment.

Ms. Newman acknowledged that there are parts of the overall area that have not been sufficiently landscaped. There is a number of reasons for that, but this will be corrected.

I added a word of thanks for the earlier than usual work that was undertaken to chop down the mountain of dirt at the snow dump.

Also related to Public Works, Stephen Greenberg said there are three strips on Marc Chagall in front of the Equinoxe where conduits were run under the street and the asphalt repairs were not done well: the fill is uneven with road surface level and every truck, CSL vehicle, dump truck that drives over, the entire truck vibrates and creates massive sound pollution. He says he has called CSL Public Works and Engineering. Ms. Newman explained that Public Works fixes potholes and cracks. This particular work was carried out by Hydro. She will look more closely into it.

Jeremy Biskin wanted to know where the historical plaques which once graced Rembrandt Park disappeared to a few years ago. I told them many had been vandalized.

The management of the Ashkelon woodlands, behind City Hall and near Cambridge Courts, has been underway since 2018, with the felling of hazardous trees, followed by understory vegetation treatment (primarily buckthorn) and revegetation of indigenous species. All hazardous trees have been dealt with, and the primary focus going forward is the understory management comprised of buckthorn treatment and plantations. Mr. Pidgeon spoke about the need in 2019 to cut down many dead and diseased trees. He said 20,000 stems of buckthorn were removed. Glenn J. Nashen, a resident of Cambridge Courts, asked if the city could do a better cleaning of the area. Another resident contacted me after the meeting and expressed concern that the trees are overgrown and some of the branches are reaching her roof and windows. She is concerned about the repercussions from these branches, most of which are dead and devoid of leaves. She reiterated that a cleanup is necessary.

Overgrown trees and branches. He will inspect this area and prescribe any prunings that are required. He note that only dead or dying branches will be taken care of and only roof clearings if they are directly conflicting with a building.
Old tree trunks and detritus

Re the stumps, those will remain because the machinery to grind down the stumps would not be able to enter this area (disturb the newly planted trees and the area is a wetland).The trunks/logs would be considered large woody debris, which is natural in a woodland. It may look odd and unappealing yet it serves a role.

Garbage cleanup. Once the contractors begin the work in the area, they will clean some of the garbage. It is unfortunate that this green space is littered with garbage, yet currently with the COVID constraints and priority list (summer time is very busy) the garbage cannot be dealt with right away.

I take a lot of pride in the work we have done at Rembrandt Park over the years. This summer we will be redoing the main basketball court, which is old and dangerous. In addition, a special half court for young people will be added. Mayor Brownstein and I have met with many of the users of the court. 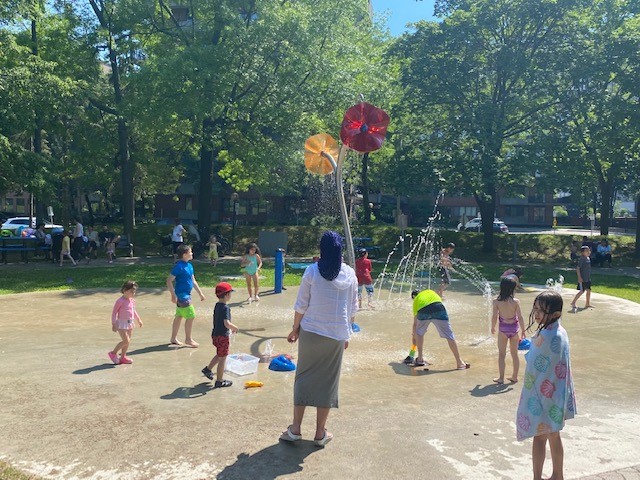 The water spray area at Rembrandt Park is very popular.

Work has been delayed somewhat due to an extreme demand for the concrete, which affects the small project. The contractor will resume the work this Monday for a week to be completed. The basketball court and the half court will be fenced for 28 days for the asphalt to be cured and installing the epoxy paint/line paint. The opening for the courts is scheduled to be at the end of July if everything goes well. It means without having any strike by construction workers or shortages of material. 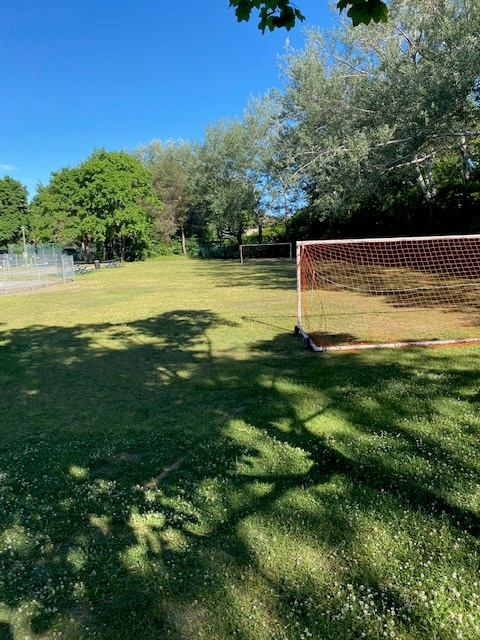 Some picnic tables have been moved to other parts of the park. We also added two large soccer nets. The water spray area is being well utilized. There has been a significant demographic shift in recent years, with so many young families moving to the immediate area. This includes the condos on Rembrandt. The park has become their virtual backyard. Last fall we also replaced some of the old benches. Ann Diner asked if we could move the bleachers, now near the new half court, to a quieter area. Ms. Newman will look into this.

I introduced Councillor Tordjman. Over the winter I worked regularly with the Traffic Committee, which he chairs, to try and come up with solutions to deal with actions of speeding on Marc Chagall. This committee is staffed by engineers. Councillor Tordjman is an engineer by profession. We also have representatives from Public Security and Police Station 9. For this summer we have introduced a new 30 km/h speed zone and at the curb, between the Marquise and the Bellagio, two bump out sidewalks. Councillor Tordjman explained that by reducing the width of the street and the length people have to walk, it will be a safer area. We also have a crosswalk and illuminated signage. Sid Rosen expressed his concern that the length between the two sidewalks are too narrow. Councillor Tordjman responded that the width is conforming. If vehicles go side by side they will slow down. Sid Margles asked if the city can restore some of the parking spots that have been eliminated by yellow paint added to the curbs. He also urged the city to watch for cars speeding coming southbound from Mackle.

I wanted to add that for quite some time residents have been asking us to come up with new measures to deal with speeding vehicles. We will likely add bollards to make the bump out sidewalks even more visible. I have personally been monitoring it during the early going and cars are indeed reducing their speed. We will definitely be evaluating this on a regular basis.

The apartment building on The Avenue has its ground floor zoned commercial. We will adopt a draft bylaw on June 14 to begin the process of clearly defining commercial use.

The process will go as follows:

Hi
Thank you for the comprehensive update. The city has done wonderful work during this difficult period and it is appreciated.

I intended to participate in the virtual meeting but life got in the way. Sorry I missed it.

Equinox is a problem building about which we have spoken before. I would be content if the city would hold them more accountable. It appears that inaction is an action as it continues to embolden the owners to be disrespectful of others even if what they do may not be illegal.

I thought the agenda had something about the dead trees in the wooded section between CSL and the railroads behind Equinox. Rothschild and the snow dumping ground.

Unless I missed it I would be happy to find out if that is being addressed.

Appreciate your efforts on our behalf.