I am deeply saddened to share the news that Harvey Levine, longtime CSL resident and the director of B'nai Brith Canada in Quebec, has lost his battle with cancer.

Harvey was the brother of former CSL City Councillor Allan J. Levine and an extraordinary individual whom I am proud to say I had a very close relationship with,  notably via his role with B'nai Brith. 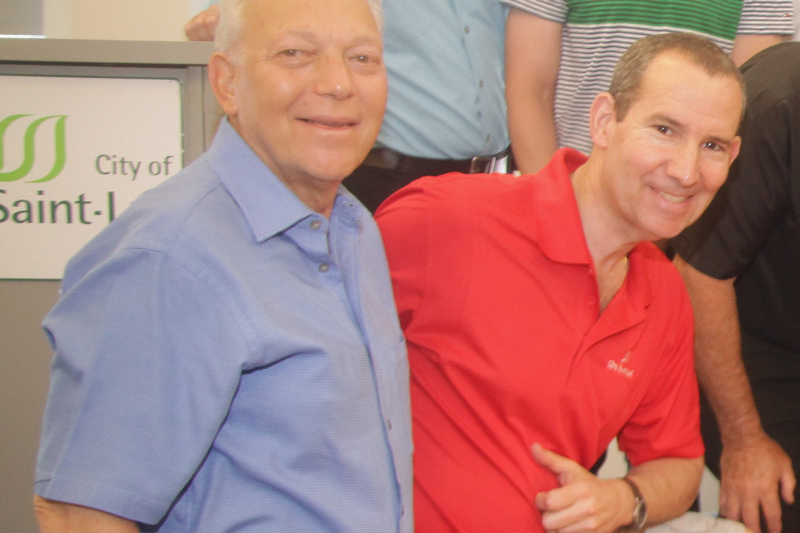 Harvey and myself in a summer 2019 photo.

B'nai Brith Canada has been active in Canada since 1875 as the Jewish community's foremost independent human rights agency. "People Helping People" is their motto with community projects, affordable senior housing, and other charitable endeavors. Harvey was the Quebec Regional Director since 2014. Prior to that he was involved with the organization for decades. Under his leadership,he maintained the B’nai Brith office in Côte Saint-Luc. He played an important role in the construction and realization of Chateau B’nai Brith, a subsidized residence for seniors. Over the years he was an ardent defender of the community, speaking out against acts of antisemitism and intolerance. He built bridges with other intercultural communities.

Previously, Harvey was an award-winning volunteer and member of B’nai Brith for over 45 years. He was a past president of the Maple Leaf Lodge of B’nai Brith Canada and more recently an advisor and trustee. In addition he continuedd to chair the annual Chanukah candle lighting project at the Jewish General Hospital.

Last winter Harvey was recognized with the Lifetime Achievement Award by the City of Côte Saint-Luc and he participated in the virtual ceremony.

Born and educated in Montreal, he was married to Doreen and the father of two daughters.

Harvey kept his illness very private, not looking for  sympathy and he kept on working. "I have to Mike," he told last fall. "I need to focus my mind on something positive."

D'Arcy McGee Liberal MNA David Birnbaum worked closely with Harvey over the years. ""I offer my deepest sympathies to the friends and family of Harvey Levine," he said. "Harvey was a stalwart in the fight against anti-Semitism and for equal access to justice and freedom for all. He was also a friend and colleague."

CSL Mayor Mitchell Browntein added this: "Harvey was a best friend to our city, speaking up against antisemitism and intolerance as well as ensuring affordable housing for our seniors in our city. He was respected by all as a kind caring person always ready to serve his community with passion."

Mount Royal Liberal Member of Parliament Anthony Housefather also worked a lot with Harvey. "As Quebec Regional Director of B’nai Brith Canada Harvey was a leader in the fight against antisemitism," he said. "We worked together on many files and he was a kind and erudite and determined man who cared deeply about his community. My deepest sympathies to Doreen and his whole family."

Michael Mostyn, Chief Executive Officer of B’nai Brith Canada, state: " Harvey was passionate in his love for the Jewish community and for Israel,” said . “For decades, during the Chanukah holiday, Harvey was always so proud to lead a group of volunteers, including the teenagers who represent the next generation, to the hospital – going room to room and bringing a little sunshine to those who were going through serious health challenges.

“That’s just who Harvey was. He was a mensch through and through, and he always had a love for B’nai Brith in his heart. He will be missed by us all, and we extend our deepest condolences to his wife, Doreen, his two daughters and his entire family.”

Eric Bissell, Honorary President for Life of B’nai Brith Canada, played a major role in hiring Harvey for the Quebec post in 2013. “He loved his work and dedicated himself to fighting antisemitism for B’nai Brith,” Bissell said. “He was a great spokesman. He was enthusiastic about Israel advocacy. . All the things that were important to B’nai Brith were important to him. He had great enthusiasm, great zeal and wonderful dedication. He could lighten up a room with his smile and his exuberance.”

Last summer Matthew Ross joined the local team as associate director and Harvey, recognizing his own fate,  worked closely to help show Matthew the ropes. Harvey's right arm was Janna  Minikovich. The two were almost inseparable at community events and made a fantastic team. I am sure Matthew and Janna will make Harvey proud.

Good-bye friend. You will be terribly missed!