District 2 in Côte Saint-Luc will be part a major electrical system upgrade of the Hydro-Québec network. Work will occur between 2023 and 2026 and impact homes on Merrimac Road, Marc Chagall Avenue as well as Bialik High School

Hydro will be converting three 120-kV substations to 315 kV. This includes the Hampstead substation (in Côte Saint-Luc) and rebuilding the 120-kV Aqueduc-Saraguay  overhead transmission line at 315 kV over a span of 18 km between LaSalle and Saint-Laurent. Known as the Aqueduc-Saraguay project, the cost is estimated at over $500 million. The project involves replacing aging equipment, maintaining the system’s reliability, meeting future electricity needs and supporting economic development. 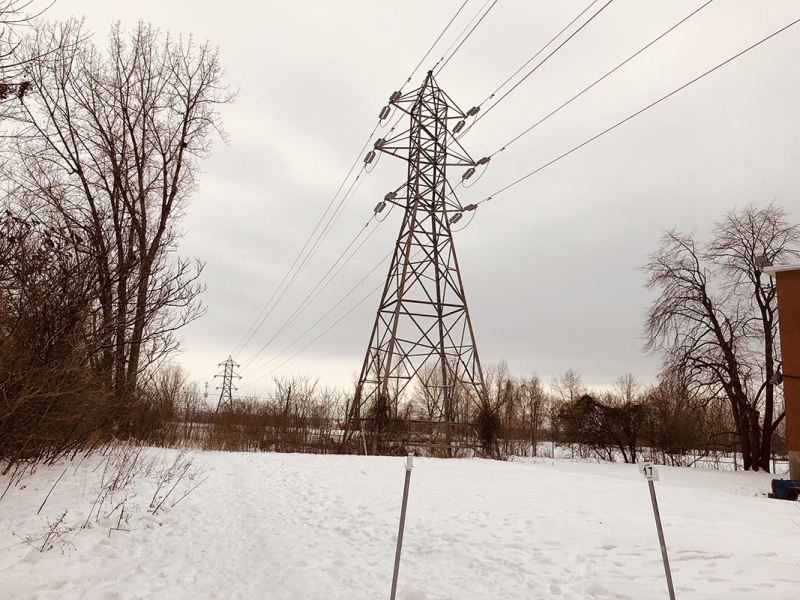 Both  Hydro and Côte Saint-Luc did a study related to what the level of Electromagnetic fields (EMF) will be, that being  a combination of invisible electric and magnetic fields of force. They occur both naturally and due to human activity.  Hydro’s study showed that the EMF’s will be within the norms. Our investigation confirmed that. Councillor Steven Erdelyi, who co-chairs this committee with Councillor David Tordjman, told me: “On the positive side when you increase the voltage, you decrease the current. That means less magnetic field so it is actually safer for people.”

There are valid reasons for this work. Despite the fact people are becoming more energy efficient, power consumption is up and more people are purchasing electric cars. In District 2 alone we just added two large Equinoxe towers. Not far off, the former Blue Bonnets Raceway will become the base to some 5,000 housing units.

A joint working committee of representatives from Hydro-Québec, the City of Côte Saint-Luc and a few members of the public started work January 27, 2020 to address public concerns about the Aqueduc-Saraguay project.   The committee’s mandate has been to review how Hydro-Québec can implement the project in Côte Saint-Luc while minimizing its impacts. For example, the committee is to assess how greenspaces can be enhanced.

The COVID-19 pandemic has had a significant impact in terms of slowing down the process. We had two meetings in February and then had to wait until October before we convened again. Right now we must finalize with Hydro the precise trajectory of the new towers. There will be at least 12 towers constructed in Côte Saint-Luc and this entire project will take over a decade to complete. We also have questions about noise and public safety we need answered.

I asked two residents, Charles Guerin from the Meadows and Glenn J Nashen (on behalf of JPPS-Bialik) to be part of the committee. Hydro has been asked a lot of very detailed questions from the city and committee members. It is hoped these deliberations can be concluded in February or March because we as a city have not yet shared a comprehensive look at the project for the community at large.

In fact only last June Hydro stated: “By the end of the year, an information and consultation meeting will be held to present the project. The public will be invited to provide feedback and comments on the committee’s work and present other ideas of how the project could be improved.”

Again, none of us thought that we would still be dealing with the pandemic in 2021 at this emergency level.

Complicating matters further has been the launch on January 25 of a series of focus groups organized by Hydro. I was part of the first session. To me, this is an example of placing the cart before the horse. As the committee proceeds, residents who have no information on the actual project are suddenly being asked for their opinions to obtain a portrait of the usage of the transmission line right-of-way.    The objective is to collect the residents' ideas and concerns regarding the future right-of-way and its potential use.

I felt badly for the Hydro personnel and consultants who were asked to organize these sessions. They were there to talk about how to beautify greenspace near the new towers. Naturally, Meadows residents who were on the call wanted to know details. ”How big will the towers be? Has an environmental assessment been made?”  These are the type of questions residents had on their minds. But this was not the right table to ask them. This Hydro team wanted to know what residents would like the greenspace to look like.  These type of focus groups should have started first with experts detailing the main project, with this coming after.

THE RIGHT OF WAY

What is a right-of-way? It is a legal agreement that allows Hydro access to the property directly beneath and to either side of an electric power line. Also called an easement, the right-of-way allows them to enter the property at any time, to perform maintenance or repairs to their equipment.

Hydro officials say they want to develop the hydroelectric right-of-way that meets the needs of the community: community gardens, playgrounds, swings, landscaping, etc. Their goal is  to improve the environment and the quality of life of the people who own this right of way. In recent weeks I have been hearing from very confused constituents on Merrimac and Marc Chagall who want more information.  I communicated again with the committee chairs in the last few days and asked them to please do everything they can to move this process along.

Please understand. This is an island-wide project and it will go ahead, regardless of any protests. Hydro does not need our permission.

Another Hydro project which directly impacts the upgrading of wiring at the Meadows has been delayed for several years because it involves the exchange of certain servitudes. The Meadows did have some say in that matter, but keep in mind that the condo property is supported by very old equipment and we may pay the price for this.

So When does Hydro opt for underground lines? Hydro responds as follows: “Whenever it’s impossible to build an overhead line because of insufficient space or an impassable obstacle such as a building.”

The cost for overhead lines, with a service life of 85 years, is $150 million. Hydro maintains it will have greater transmission capacity and a faster recovery from outages. An underground line, it points out, has a service life of 40 years, a lower transmission capacity and it is more complicated to maintain and repair. Oh yes, the cost is $440 million

Hydro-Québec’s transmission system, like all other transmission systems in the world, is mainly an overhead one. Out of 34,000 km of lines, they say only 200 km (0,7 percent) are underground, and those are mainly in downtown areas.

Since underground lines are more expensive, Hydro says they’re used only in places where an overhead line can’t be built, either for lack of space, as in downtown Montreal, or because of an impassable obstacle like a building.

The costs of an underground line are determined by a set of variables that have to be analyzed for each project. For this project, a 315-kV underground line would cost about $290 million more, nearly three times more than an overhead line.

Since Hydro-Québec’s investment choices have a direct impact on electricity rates for all of its customers, the company says it has an obligation to choose the lowest-cost option.

Last but not least,  Hydro states, an overhead line can carry more electricity than an underground line.

Here is how Hydro sums up choosing the optimal course of action: they have a duty to submit the best possible project, one that is technically, economically, environmentally and socially sound and that benefits its customers; performs well from a technical perspective; can be carried out at the best possible cost; respects the environment; and  safeguards the public interest and that of its customers

The consensus does seem to be that we might be better off health-wise with the overhead wires.

The latter is true. But these towers will not impact our entire city of 34,000 residents so we do not have strength in numbers. Nonetheless, via these focus groups it is hardly futile to go on record with our concerns.

Furthermore, we can continue to make the argument for underground wiring. But unless we as a city pay for the work, Hydro does not have to agree. Their strategy has been shared with you in detail up above. Our annual budget for the entire city is $75 million. Underground work would cost $440 million, so we can all do the arithmetic.

The towers presently contain an overhead transmission line operating at 120 kV. They will be dismantled and rebuilt at 315 kV. The exact route of the line is currently under study and the subject of consultations with the special committee.  I met via Zoom with Meadows residents for nearly an hour and a half and clearly everyone would to see the present-day large tower moved somewhere else, like behind the JPPS-Bialik field. Is that possible? It certainly will be raised at our special committee level.

The Hampstead substation located behind Mount Sinai Hospital was built in 1955.   The electricity supplies residences, businesses and industrial customers in Côte Saint-Luc, Hampstead, Montreal West Côte-des-Neiges–Notre-Dame-de-Grâce and Lachine via the distribution system. As part of the project, new 315-kV equipment will be installed at Hampstead substation.

Thank you for your clarifications on the intended work Mike. While you are able to clearly spell out the pro’s and con’s of this project , you say nothing about protesting the project.

Hydro towers , cell towers are increasing in size and strength and who knows what the health risk are, as most info is simply not scientific or is scientific and inconclusive or just fluff produced by hydro and standing committed to white wash the project. The environmental assessment is not complete on this project so we have no clue what impact this project will have. Your saying this report is simply just a pacifier and will not deter in anyway the direction the project takes. What I think we need to do is organize and sooner then later. We need then to protest this project and boycott any committee that merely inform us of the progress of the project , we need leadership on strategic protesting using media and grassroots protest cmon let’s do it.

My main takeaway from Mike is that Hydro missed an opportunity to convey the proper information. The equipment is a necessity created by our power needs - present and future. Before deciding if we want flowers or fences, Hydro should first inform us of known potential effects on our community and what they will do to to attenuate/remove them.

In response to Marty, may I say that meeting the power demands of our ever increasing technologies is just as challenging as ensuring its safety to all of us. Deciding to 'organize protests' without having information on the subject is sort of pointless and retrograde. You could always decide to go somewhere remote and do away with all your comforts, but then, I'm not sure that you would be any safer.

The point is, we need to hear both sides.