A beautiful piece on the late John Elias

Paying tribute to Johnny Elias
By Danny Gallagher
Canadian Baseball Network
I first met Johnny Elias when I played in the Dorval Senior Baseball League in suburban Montreal in 1988.
I was his teammate that season. He was 50 years old at the time and still throwing competitively. He would regale me with stories about his Grand Slam Baseball School and often asked me to plug his school in my paper, the Montreal Daily News. 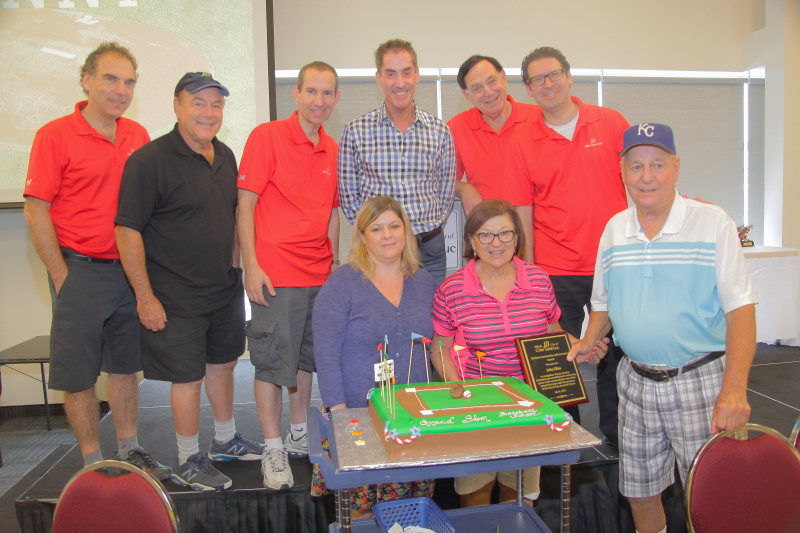 I am so happy that I initiated this 2017 CSL Golf Classic where we honoured Johnny (wearing the KC hat).
No doubt about it, Elias was a grand baseball man. He grew up on the sandlots of Montreal and was so talented with that left arm of his that he won a scholarship in 1960 to Michigan State University where he graduated with a bachelor of science degree.
Elias then obtained his master's degree in administration of physical education, kinesiology and physiology from Springfield College in Massachusetts.
Elias went on to pitch in the Baltimore Orioles, Kansas City Athletics and Washington Senators organizations. From 1962-65, he threw in the minors and it was in 1963 that he showed some promise for the majors while in the K.C. chain. It was his only full season out of the four he pitched in.
Statistics from Baseball Reference show that he was 9-13 in '63 with a 4.31 ERA, recording 164 strikeouts in 163 innings for Daytona Beach in the Florida State League.
In 1964, Elias pitched for Granby in the semi-pro Quebec Provincial league and would continue to play competitively in Quebec and on the international stage for years. He was a member of the pitching staff for Team Canada at the Pan-Am Games in Winnipeg in 1967. From 1968-70, he helped Trois-Rivieres to two league championships.
Elias died Dec. 10 at the age of 82 following a stroke and a tough battle with Alzheimer's. Elias' wife Marlene said in an interview that he suffered the stroke Nov. 8 and never woke up. For a good portion of the time he suffered from Alzheimer's, his wife looked after him at home.
"He kept falling and I couldn't get him up. His walking was very poor,'' said his wife of 58 years. "He was still 200 pounds and dead weight. I'd call 911 to get him up. It happened so many times. Then the last one (fall), I said, 'I'm taking him to the hospital.' That was two months ago.''
In 1970, Elias embarked on a venture that would last 27 years: his Grand Slam school that featured numerous instructors and many Expos players, whom he befriended over the years. He was an Expos batting-practice pitcher for many years at home games, beginning in 1969. Elias would schedule his three-week school each summer when the Expos were at home.
"I'm sorry to hear of the passing of Johnny, a good baseball man. I served as an instructor at his baseball camp. My heartfelt condolences to his family,'' Expos legend Tim Raines wrote on Twitter.
"Saddened to hear of John's passing,'' former Expo Tommy Hutton said in a Twitter tribute. "I played golf with him often in Montreal and appeared at his John Elias Baseball School many summers.''
Hundreds of young kids in the Montreal area are indebted to Elias for running the baseball school, not only for instructional skills but it allowed them to rub shoulders with their heroes. Many of those fans took to Twitter and Facebook to mourn Elias' loss.
"John was a huge part of Montreal baseball. Another part of it is gone.  What a great man and a great coach,'' Kosta Papoulias wrote in a Facebook post.
"As a 10-year-old, I went to his baseball camps. Johnny would personally pick me up and drive me home. Thanks to Johnny, I got to meet Gary Carter and sign his cast,'' Marc Lechter said on Facebook.
Elias was very fond of Carter. Kid was most definitely Elias' all-time favourite Expos player. Elias and Marlene would go to Florida for years and years to see Carter and his family. Of course, Carter and Elias would partake often in their mutual love of golfing.
Speaking of Florida, Elias participated for 12 years in various forms in the Major League Legends baseball fund-raiser in support of the Joe DiMaggio Children's Hospital in Hollywood.It's been said that Elias boasted the largest collection of Carter memorabilia and had acquired an enviable stash of Expos goodies. A few years ago, he donated about 90% of his collection to the Cote St. Luc Sports and Recreation Centre."John and Gary were very good friends,'' Mrs. Elias said. "He helped get Gary get a place in Montreal. Gary used to come for lunch and have a steak. It was so nice.''
Among his many accomplishments was volunteering to become McGill University's first baseball coach in 1994. In 2008, he assembled and managed a team representing Canada to victory at the Vintage Baseball World Series in Westlake, Mass. That championship was a feather in his cap.
A few years ago, baseball historian Bill Young of Hudson, Quebec and a few others successfully nominated Elias for induction into the RDS Quebec Baseball Hall of Fame. Elias was also proud of the Ambassador of the Year award he received years ago from the Town of Cote St. Luc for his help in developing baseball in the community.
Elias was such a wonderful, wonderful man with so many fingers in so many baseball pies.
When he wasn't promoting baseball, he spent a lot of time teaching physical education and coaching basketball. He was a force as a basketball official, something he did for 50 years. He officiated at many Canadian and international basketball events.
"I wanted him to write a book.,'' Mrs. Elias said. "I told him, 'Dictate to me and I will type it in.' He had a lot of stories and anecdotes. He knew all kinds of people.''
Besides his wife, Elias is survived by his daughter Caroline, son-in-law Kevin Smith, grand-children Ashley, Connor and Owen and sister-in-law Audrey Willis along with numerous friends, including many in the media.
Danny Gallagher's Expos book Always Remembered is discounted throughout the month of December at Indigo and Amazon.
ON A PERSONAL NOTE: I will be raising the possibility of naming one of the baseball diamonds at Kirwan Park after Johnny. That is where he held his Grand Slam Baseball School.
See this tribute video we did for Johnny in 2017: