Bravo to D'Arcy McGee Liberal MNA David  Birnbaum and his entire team for doing such a first-class job with their live Zoom-focused awards ceremony.

The winners of the sixth annual D’Arcy-McGee-National Assembly Citizenship Medals competition were to be recognized at a public ceremony. Like everything else due to the COVID-19 pandemic that had to be postponed. But David and company adjusted beautifully to the "new normal" and one might make the argument that this format should be followed in future years. It was wonderful to watch. I started on my phone as I washed the dishes and finished on my laptop. In fact more than 100 people watched it live. 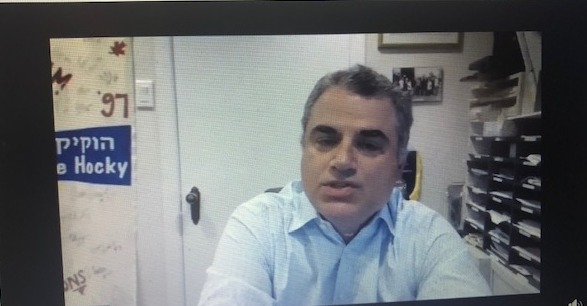 Three individuals and one organization were recognized for “outstanding achievement in community involvement”. They were George Nashen, 96, in the name of surviving veterans of World War II and those who passed before them; Sima Paris, co-founder and President of the Friendship Circle; MultiCaf, a store-front community outreach and referral service in Snowdon-Côte-des-Neiges and David Lisbona, Côte St-Luc entrepreneur and initiator of an emergency food-delivery network for seniors during the current pandemic. “This has been an unprecedented and trying time for all us but it has also brought out the very best in so many individuals and organizations in this riding,” said  David, who initiated this citizen-medal program soon after his first election in April 2014. “While the crisis around us is far from over, I think it is always the right time to recognize those who inspire us to do more and do better by our fellow citizens. Even if we can only celebrate this event virtually this year, I do hope it will lift us up at this very tough time. "

George Nashen and his wife Phyllis.

Lt. Gen. Roméo Dallaire (ret’d) delivered a brief address to the Zoom gathering. His own harrowing and heroic experience during the Rwandan genocide, and his outreach efforts since retirement have made him a sought-after public speaker. His Roméo Dallaire Foundation works to inspire young people from underprivileged backgrounds to develop their leadership potential. In appreciation of Mr. Dallaire’s participation, David's office made a donation of $1,000 to the Foundation. It was only appropriate that Dallaire introduced Nashen, an extraordinary gentleman whom I have been proud to know and call a friend for many years.

David was an excellent emcee. Each recipient spoke live via Zoom. It was a flawless production. Bravo!!

You can see the entire program via video on David's Facebook page.