Just over a month ago Charles Eklove says he did not know the first thing about Zoom video conferencing.  But when the COVID-19 pandemic forced seniors to self-isolate, the chairman of media and public relations for the Côte Saint-Luc Men's Club became an expert in no time at all.  Ditto for the hundreds of members.

"The Cote Saint Luc Men’s Club is on the front lines to reach out to its members in these challenging times of social distancing and self-isolation'" said Charles.

Last Thursday over 200 members benefitted from the first general meeting to be held through video conferencing.  It  was a great success.

Opening remarks from event host Mike Barkai  were followed by a welcoming presentation by  President Mannie Young. He showed a video of a special act of kindness which highlighted the important actions that people are taking during this time.

An update of the situation in the city of Côte Saint Luc was then presented by Mayor Mitchell Brownstein. He spoke of the many services offered by the city . Entertainment and diversions have become very important to help combat the feelings of isolation brought on by the required social distancing in these unprecedented times. The Côte Saint Luc Dramatic Society has plans to release a video, to be available through the internet, of some of their performances. They also intend to  present live entertainment to seniors who are shut in by performing outside the front of their residences so that the residents can enjoy the excitement through their windows or from their balconies.

The mayor also spoke of the importance of wearing face masks when going out. Not only do they offer an element of physical protection but they also serve as a reminder to others to be extra prudent in these times.

As for the featured speaker, it was former NDP leader and present day political pundit on radio and TV  Tom Mulcair. He was informative, interesting and generous with his time,  commenting on the actions of our governments and on the possible future ramifications to our economy and health systems. After his presentation he answered many questions that had been submitted from members during the meeting. "The reactions and feedback of our participants confirmed that this presentation was very well received and appreciated," said Charles, noting that  Second Vice-Presiden Kenny Bessner expressed words of thanks. 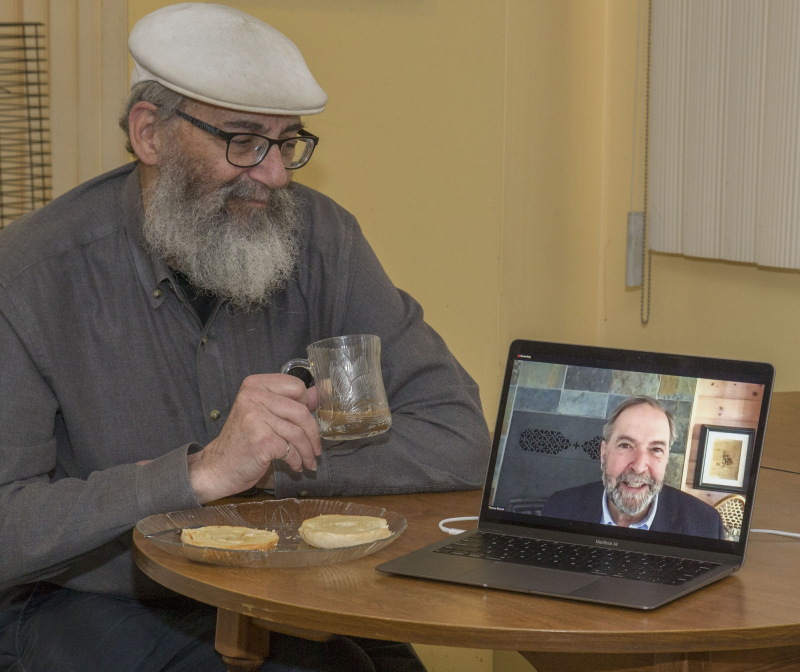 The Cote Men’s Club continues to expand the services it offers to its members over the internet. Special interest groups now offered tinclude: Bridge, Coffee Compassion and Coping, Discussion group, Drones, Pastel Art, Photography and Writers Workshop. Members are encouraged to join activities of their choice by contacting the chairmen of the activity.

Kudos to the Cote Saint Luc Men’s Club and its wonderful team of volunteer for the invaluable work that they do.

Thanks to Mike Barkai . Without him it never would have happened ,As well David Haltrecht and Murray Shostak who helped and worked tirelessly with Mike. Now we have over 8 activities on Zoom and growing.