"I want you to know how much you are in my thoughts and I pray for a New Year Miracle," I wrote. "You are the toughest lady I know.. Enjoy your family and I hope we can speak this week!" 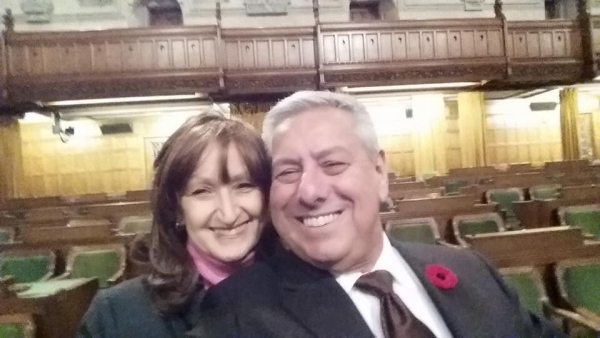 "Thanks Mike," she wrote right back. "We can try tomorrow. Rather complicated, Shana tova."

On Monday Ruth was admitted into Palliative Care at the Mount Sinai Hospital, ironically an institution where she served as a volunteer for many years. Today she passed away, after valiantly (and very privately), battling cancer for several years.

Ruth was first elected to council 29 years ago. Like others she sat out the four years of the forced mergers with Montreal, but returned when Côte Saint-Luc was reconstituted in 2005. That was when I was first elected. I had first met many years earlier, even prior to her assuming council duties. She was a member of the Emergency Medical Services (EMS) and a volunteer in the figure skating program. I helped her in that first election and when she won (alongside the man she would call her council husband -Glenn Nashen) she and her husband Peter took us both out for a steak dinner.

Ruth was a devoted councillor and cared deeply for our community. It was interesting to see the fire in her belly at council meetings and this something she kept going until her final days. Just a few years ago, Ruth convened the mayor and council to share some dark news. "I have been diagnosed with cancer," she said. "Only my family knows.But you are my council family. Please do not share this news outside this room. I will fight this."

And "fight" she did. We were all in awe of Ruth. Despite her treatment and side effects I cannot recall her missing one meeting or private event. She was stoic indeed and for a time it looked as if she had defeated the dreaded disease. When it returned she still kept it to herself and her loved ones. Most of us were not even aware. But a few months ago her condition worsened. She shared with us that at this point there was no cure.

Most people in her position would have stepped down, gone into a dark room and get angry about their fate. But not Ruth. I will forever admire how she comported herself. Some nights she was not well enough to join us, so instead we got a detailed group e mail with her comments on every single agenda items. She was at our last public meeting on September 9. You can see the video here. I knew things were not good when she asked me to carry a small file folder into the council chamber for her. She was too weak to lift it. That night Ruth was as active as ever in our discussions.

What a brave lady! It was extraordinary to see how emotional she was on decisions we were taking on issues that would only come into play a year from now.

Last Friday she e-mailed me again, wishing to know how things were progressing on a certain dossier we were both interested in.

Ruth was a devoted wife, mother and grandmother. My sympathies go out to her entire family.

Funeral services for Ruth will take place on Thursday, October 3 at 11 am at Paperman and Sons.I am still in shock over this sudden news. We all feared we would lose Ruth soon. But it came too quickly for us to accept it.

I am deeply saddened beyond words and trying to just get over the shock. I shared a similar Dutch Jewish upbringing with Ruth. I remember her from my youth even though I am much younger. She called my parents Uncle John and Tante Sonja and I remember visiting with my parents at her house where she grew up when I was a little girl. We reconnected when she attended my father's Shiva in Montreal in 2016 and stayed in touch since then cherishing our similar upbringing and family friendship. She came to a presentation I gave at the Cote St. Luc library where I was so privileged to have my photo taken with her and Mitchell Brownstein and then she and I had lunch together afterwards sharing memories and so many similar life views. I cherish this wonderful memory of my personal time with her. I will miss her dearly.

Ruth and Peter and I and the entire Kovac Glick mishpocha have know each other since our days at the Young Israel of Val Royal . We participated in all of their simchas.
Many years later we became neighbors on Centennial.
We are having a hard time wrapping our heads around this. Our thoughts and prayers are with everyone in the family.

Mike, I am shocked by the news but so thankful that I have been able to consider Ruth part of my EMO/EMS and city of Côte Saint-Luc family for 40 ish years!!
What a PHENOMENAL woman!!!
She will be surely missed by all that knew her!!! My condolences to Peter and the rest of the family.
R.I.P. Ruth. 💗💗💗💗

She was a great lady for Cote St. Luc .

She will be missed by all who live here.