After nearly 20 screenings in a matter of months at Jewish film festivals all around North America, as well as Bucharest, the YidLife Crisis duo of Eli Batalion and Jamie Elman finally launched their feature-length documentary called Chewdaism: A Taste of Jewish Montreal for a hometown audience last spring at The Rialto. Now it will make its way to Côte Saint-Luc via our Public Library and a presentation on Tuesday, Sept 10 (2 pm to 4 pm). Admission is $5 in the Harold Greenspon Auditorium. 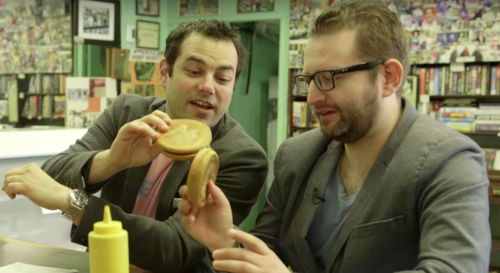 Elman and Batalion toast to Wilenskys.

The film is a tribute to Jewish Montreal and tells the story of the city through a day’s worth of eating throughout the town. “It’s both fattening and educational,” says Batalion, who tells me that he and Elman are working with Tourisme Montreal and may be releasing the film with the CBC soon.

Chewdaism follows Batalion and Elman as they discover the roots of the city’s Jewish community through a series of classical Jewish eateries telling the story of their community in the last 100 years, with various guests along the way sharing tales and meals. YidLife Crisis is dubbed as the world’s first 18 and over (or Chai Plus) Yiddish web series and Jewish cultural comedy brand. It has spawned numerous live presentations and screenings across the globe, as well as the travelog web series, Global Shtetl, the precursor to Chewdaism.

I was fortunate to receive a screener of the film and I liked it so much that I have already watched it three times. The breakout star of this film just may be Zev Moses, the bright young executive director of The Museum of Jewish Montreal. He is a walking encyclopedia of this city’s Jewish history and while I have yet to personally visit the Museum his performance has given me a reason to do so now. And boy will this film make you hungry as Batalion and Elman nosh at the likes of Fairmont Bagel Factory, Schwartz’s Deli, Wilenskys, Cheskies, a Sephardic Jewish home in Côte Saint-Luc and Fletchers at the Museum.

Besides Moses, Concordia lecturer Steven Lapidus, Outremont Councillor Mindy Pollak and historian Pierre Anctil share their expertise on screen. “After years of touring around the world capturing the culture and the food in different corners of the world, we decided to turn the cameras on our own culturally unique backyard of Montreal to show the world all the great things the Jewish community has contributed to it, well beyond the bagel,” says Elman.

You can find out more about the film by going to www.yidlifecrisis.com.

Meanwhile, Batalion tells me that an upcoming episode of YidLife Crisis was shot entirely in Côte Saint-Luc and deals with the topic of antisemitism. "It’s all part of a bunch of advocacy work we’ll be doing in the month of September , and ultimately hoping to take this stuff to the schools as the hip way of talking to the youngsters about these issues," he says.