I was pleased to chair the event once again, working hand in hand with our invaluable event coordinator Alvin Fishman. After a round of golf on the back nine, everyone headed to a special awards banquet at the Aquatic and Community Centre. This year we honoured former city councillor and long-time high school teacher Allan J. Levine. 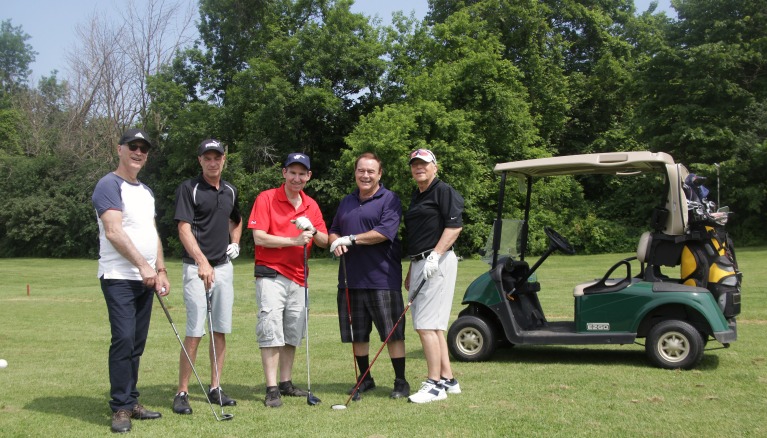 With David Birnbaum, Michael Maislin and Allan and Harvey Levine.

Players competed in the Masters   (age 65 and older) and Eagles groups (age 64 and younger).

Meadowbrook is a thing of beauty in our community and I am reminded that when I golf there once a year. This is such a fun event. I very much enjoyed spending time with members of my fivesome – D'Arcy McGee Liberal MNA David Birnbaum, Michael Maislin and Allan and Harvey Levine.  We do not have to keep score. This is literally the only time I take out my clubs. Each hole I found myself getting a bit better, remembering the tutelage I got from my late grandfather Lewis Sherwin more than 40 years ago. Members of the Levine family with Mayor Brownstein.

Allan J. Levine was a member of Côte Saint-Luc City Council for more than 30 years. He also taught math and science at Wagar High School for more than three decades, where for a number of years he doubled as the driver’s education instructor. Well-known for his great sense of humour, he remains active in the community today as president of the Brigadier Frederick Kisch Branch 97 of the Royal Canadian Legion, a position he holds with great pride as a tribute to his late father who was a veteran. Allan has also played an important role in the local tennis community.

Allan was   joined by his lovely wife Rhoda, Brother Harvey, Sister Gloria, his children, grandchildren and other family members.

“It’s no secret that I have a passion for tennis and love a great match,” Allan said in his speech. “Well, over the past 57 years Côte Saint-Luc and I have been a great love match. It started in 1962 when I met the great love match of my life, my wife Rhoda, who lived here in Côte Saint Luc. Compared to where I grew up, I quickly realized that Côte Saint Luc was, in the words of the TV show The Jeffersons, ‘Movin’ On Up.’ My years teaching at Wagar High School confirmed that this is a special place committed to children, families and education.

“In 1983, I made Côte Saint Luc my permanent home and had the pleasure and privilege to serve on city council for over 30 years. My work on council and my work with our city’s veterans has been an honor. I raised my children here, and now my grandchildren have come to love and appreciate this community as well. We are blessed to live in such a great city, and I am blessed to have had the opportunity to serve it. Thank you for this great honor and recognition. In the words of tennis great Serena Williams, ‘Everyone's dream can come true if you just stick to it and work hard.’ Thank you for allowing me to work hard for you and achieve my dreams. “

I want to add that Allan was not only an honouree, he sat on our committee as did Councillor Erdelyi. 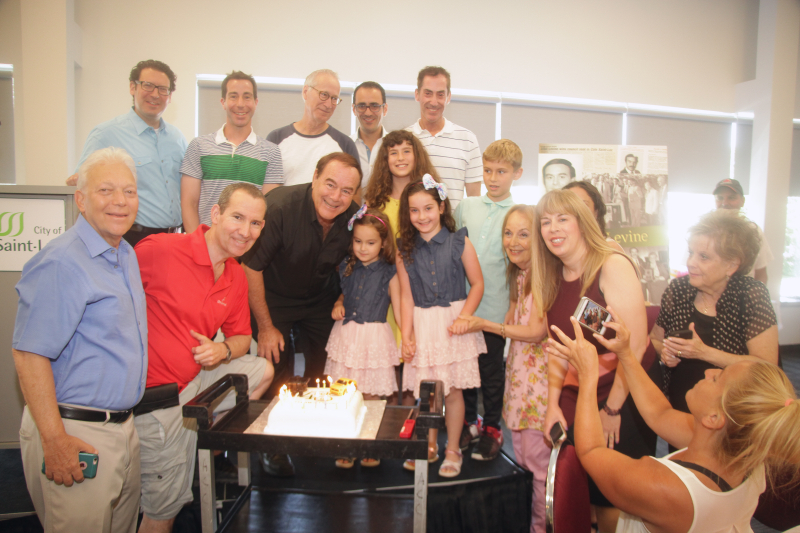 A special cake was rolled out for Allan.

Towards the end of the event we rolled out a beautiful cake, decorated with automobiles. We also had a nice photo montage prepared by our Director of Public Affairs and Communications Darryl Levine (no relation to Allan).

Once again, donations were accepted for the Pierre Brunet Parks and Recreation Bursary Fund sponsored by the local McDonalds Restaurants Cote Saint-Luc Shopping Centre franchisee Pierre Brunet. This helps families who cannot afford to register their child in a program and takes into account requests from children with special needs as well. I am so proud to have created this fund in conjunction with Pierre and former Parks and Recreation Department stalwart Harold Cammy. 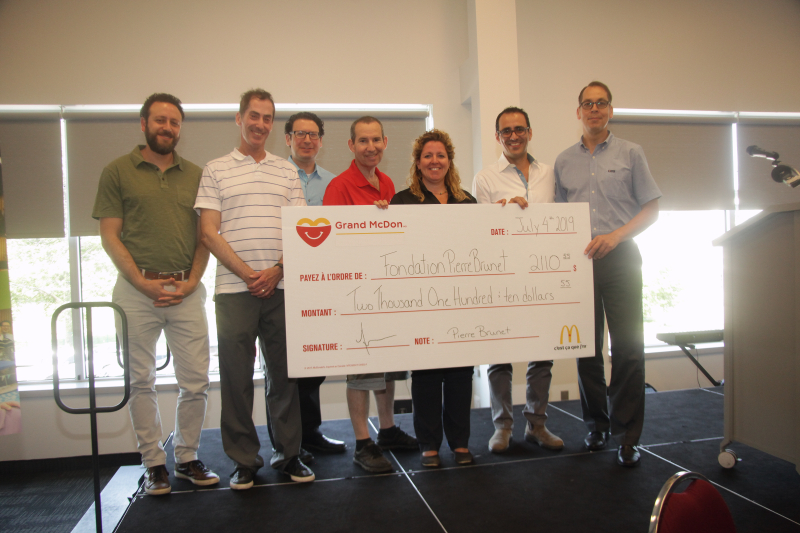 For McHappy Day each May our Parks and Recreation Department staff take a leadership role in volunteering at the Côte Saint-Luc franchise. Donations from that day added up to $2,100 and two of Pierre’s managers, Dennis Murphy and Anik Ferron presented us with the cheque. Next up were Mannie Young and Syd Kronish. On behalf of the CSL Men’s Club they presented a cheque for $1,800 to the fund. It was not over yet. MNA Birnbaum had a contribution of $600. Honouree Levine added another $600 from the Legion. Then came a big surprise. Our already generous sponsors Ezerzer and Brener stepped up with a $500 cheque. That all added up to $5,600 in new revenue! 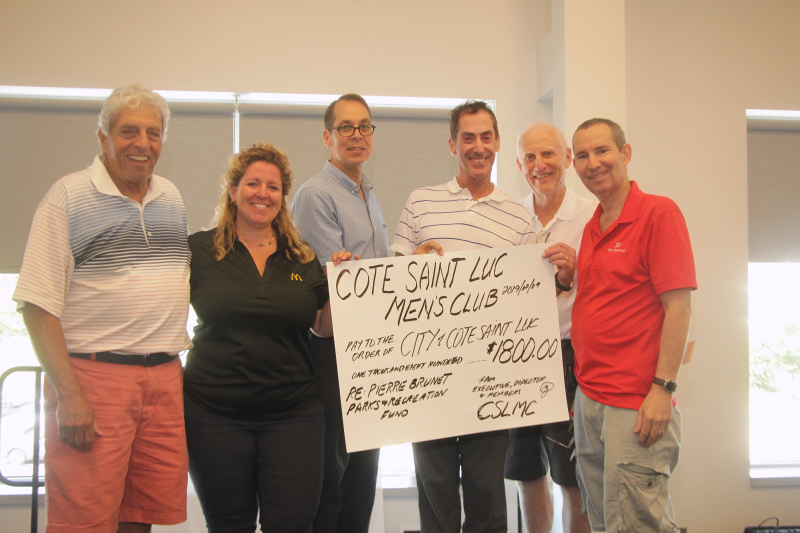 We would also like to thank Pharmaprix Quartier Cavendish   Pharmacists David Banon and Sarah Rachel Ettedgui and Store Manager Ian Macdonald for donating assorted cosmetic items which were placed in our grab bags – donated by Quartier Cavendish. To Lenny Rosenberg from TCBY, who once again donated 150 TCBY Cups for dessert? Silver Star Mercedes donated a one week free rental car as a main door prize.   Provigo St. Jacques provided    assorted soft drinks and bottled water. Peter Lipari of IGA Lipari Côte Saint-Luc Road donated   bottled Perrier water, coffee and vegetable juices for our reception.  Universal Safety Equipment and Supplies on St. Jacques   generously donated a  gift of a golf bag for our door prize drawing. Everyone receive a free pass to try Orangetheory Fitness. Pierre Brunet and his team set up a welcome kiosk before golfers hit the links and provided the coffee table with assorted flavored coffee, sumptuous pastries and muffins. Police Station 9 Director Luis Oliveira and his staff, notably Officer Marie-Christine Nobert, had a welcome table as well with nice caps, water bottles and other swag.

Mayor Mitchell Brownstein, Councillors Steven Erdelyi, Mitchell Kujavsky and David Tordjman and Liberal MP for Mount Royal Anthony Housefather were also on hand. I was happy to see former Councillor Sam Goldbloom with us. He co-chaired this event with me for many years. 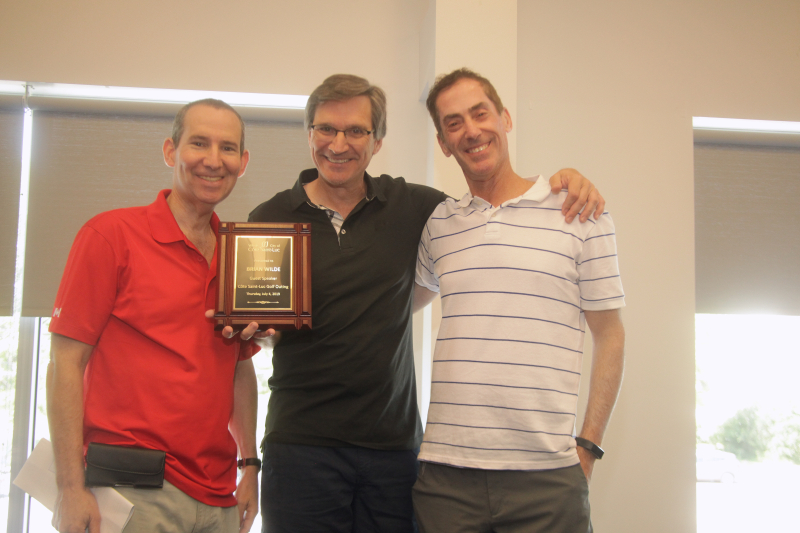 Brian Wilde is one of the best sports television broadcasters Montreal has ever seen. After more than two decades with CTV Montreal, he has now taken a step back to enjoy life. His passion is covering the Canadiens and he still does so for Global TV, with appearances on the morning show during the season and a fantastic post-game “Call of the Wilde” blog.  He told a great story of his first interview as a sportscaster well more than three decades ago in his native Edmonton.  Superstar Wayne Gretzky had hurt his toe and Brian was dispatched to a golf course where Gretzky was playing to get a clip. Little did he realized that the Great One and broadcaster Rod Phillips had a joke planned? When a petrified Wild asked Gretzky about his toe he was met with a terribly rude response. Shocked and dismayed, be began to leave the scene when Gretzky apologized for the joke and agreed to do an interview. Still quite shook up, Wilde asked one question and took a mere eight second response and returned to work – even turning down an offer of dinner and drinks with Gretzky.

Our guests had some good questions about the Canadiens, their ill-fated attempt to sign free-agent Sebastein Aho and where GM Marc Bergevin goes from here. It was such a privilege to have this great hockey mind with us. Mannie Young already plans to book him for the Men’s Club.

We handed out eight trophies. 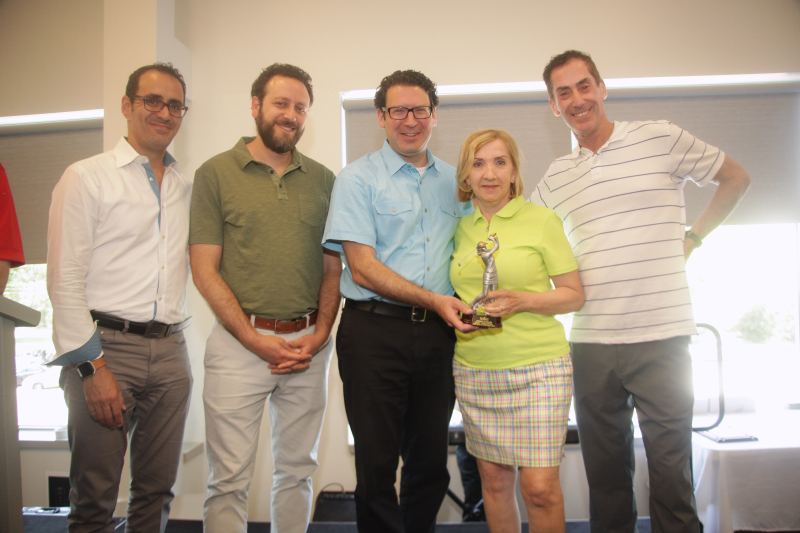 Louise Ferland is presented with her trophy.

Finally, thanks to Robin Chemtov for  providing the music, the ever so reliable Rami Negev for his photos  and to volunteers Toby Goldner-Shulman, Maureen Hankin, Doris Gottheil, Peter and Rhoda  Sternberg  and  Cyla Hus. To our staff,  Cornelia Ziga, Raymond Valiquette, Denis Kopitas, Steve Papp, Mauricio “Moe” Giobbi, Beate Hewel, Elaine Litman – Waisgrus, Marvin Pincus, David Blond, Sean Fraser. Charles Price, Meghan Panarello and all  of our ACC blue   and white collar staff. A final word about Alvin Fishman, a tireless and devoted worker. The two of us began planning this event in January and for more than six months, not even a  nasty bout with kidney stones stopped this one-man show from taking care of the endless details that go along with planning for such a large event.

Best coverage of a great event. So sorry I was unable to attend.

It was a really well-organized event.
Happy to have been part of it.