Wagar Field proves to be an excellent venue for Canada Day

Due to renovations at the Samuel Moskovitch Arena, much of Pierre Elliott Trudeau was off limits so we moved this year’s Canada Day festivities  in Côte Saint-Luc to Wagar Field on Parkhaven. It was very well received from those  I spoke to throughout the evening. 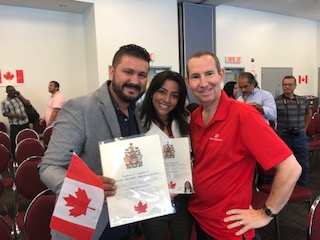 Congratulating these new citizens from Mexico.

As per tradition,  we started things off with a Canadian Citizenship Ceremony at our Aquatic and Community Centre. The ageless Judge Barbara Seal presided over an eloquent program in which  40 new citizens from 15 different countries were sworn in. “Immigration is a source of richness for our country,” commented Mount Royal Liberal MP Anthony Housefather. Councillor Sebag and I take the oath ourselves. 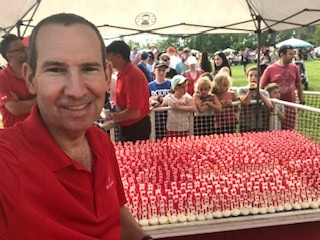 After the ceremony we walked across the street to my former high school.  Hats off to Parks and Recreation Director Cornelia Ziga, Event Coordinator Laura Trihas and the rest of our staff who worked so hard to make this event a huge success. Kudos as well to Councillor Ruth Kovac, the event chair who was unable to attend. CJAD personalities Dr. Laurie Betito and Dan Laxer served as emcees. 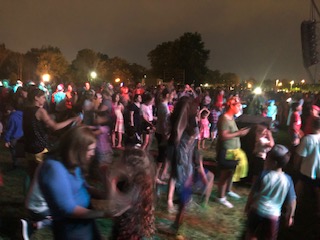 People were dancing up a storm. 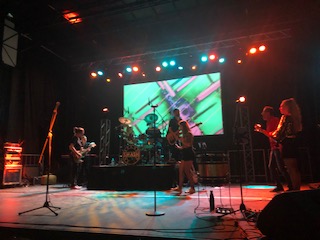 Many of us agreed that the venue of Wagar Field is actually a better and more controlled spot than Trudeau Park. For this year fireworks were not permitted in this area.  We like the idea of keeping festivities here and efforts will be made to find a formula to make a fireworks display work. 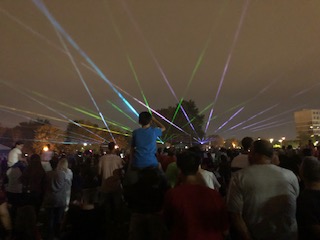 Activities culminated with a laser show.