It has been over two years now since construction began on the first phase of the Equinoxe luxury apartment complex. While the ownership have been on board from day one to be good corporate partners, the same cannot be said for their sub-contractors. A significant amount of my time and ergo our senior management has been spent babysitting this project over frequent violations of our bylaws.

Phase 1 concluded last October and  the first tower is full of new tenants. I have said this before  and it merits repeating. It was the administration of Mayor Bernard Lang which granted the zoning for this project over 30 years ago at a time when he and his council had to know how crowded this street could some day become. We got lucky and the land remained vacant for decades. All good things come to an end and developers finally did buy the property. One large building was bad enough, but this land was zoned for two. Our council did lower the maximum height.

As work on Phase 1 continued, we managed to resolve issues on an almost daily basis with the developers. But it involved so much work for our staff. I established an ad hoc committee of condo building reps and we convened when necessary with the developers. 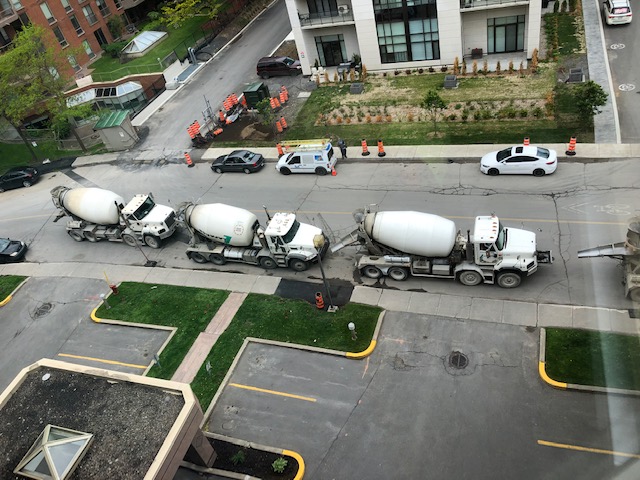 Cement trucks block the driveway of The Rothchild II.

Work on Phase 2 began a few months ago and all seemed to be going well until  Tuesday evening, June 11. I was in a Council meeting when I began getting emails from constituents that the work of pouring cement was going well beyond the 7 pm shutdown period. We have always allowed them to go a bit over, but on this occasion they refused to stop. Public Safety officer and police were on the scene, but these rogue operators simply took the tickets and kept working. Whose fault really was it? Clearly someone up top greatly underestimated the time required to pour cement. The last truck left at 1 am. This was absolutely unacceptable  and as a result our senior management team convened Wednesday morning.The police were involved in the dialogue as well.  This will not be tolerated! Extreme measures will be taken if this crew tries to do anything like this again. They have stretched  our patience and damaged a lot of the goodwill the developers have tried to establish. Young children were woken up. People had trouble getting to sleep.

I want to thank our staff for their immediate response to this issue. I spoke to dozens of residents by phone and email today to let them know how their complaints were warranted. Work on the site ended earlier than usual Wednesday. Since I did not hear back from the developers Wednesday, I can only hope they got the message!

I think that once they start pouring cement it must be finished. They probably started later and I’m sure did not anticipate how long this would take.I did hear them past 11 pm. Sometimes one must be a little tolerant. I’m sure the new bldg will beautify the street and city, bring in more revenue thus lower taxes and provide homes for more people. I am more concerned about traffic and cars racing around curve of Marc Chagall. I certainly hope the green spaces will be kept in front of snow dump.Nobody seems to complain the trucks dumping snow all nigh! Thanks Mike👍