Soon after developers announced they planned to construct two high rise rental buildings on Marc Chagall Avenue I established an ad hoc committee, consisting of  representatives from the four  condominum complexes on the street (Le Cours Marc Chagall, La  Marquise, The Bellagio, Rothchild II and on Mackle Road the Rothchild I).  We began meeting immediately and a lot of issues were resolved as the new Equinoxe became a reality,

I always begin my stories  on the Equinoxe with the historical note that the zoning to allow for this facility was adopted by a previous city council more than 30 years ago.

On April 29,  I convened another meeting. This time we gathered at the Equinoxe, which everyone on hand agreed closely resembles a five star hotel. 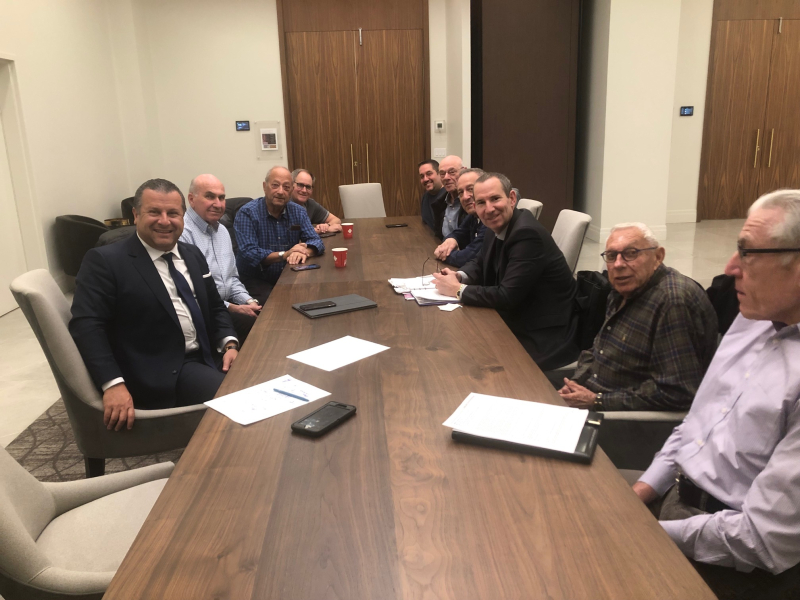 A picture of our group with André Doudak (left) at the Equinoxe.

André Doudak reported that all but two of Phase One’s 170 units are occupied. Excavation is nearly complete and a crane will be installed next week to begin the construction phase for the second tower, which will number 116 units. It is scheduled for completion for spring 2020, with move in date likely in July 2020. The bulk of the “messy” excavation was done during the winter when most people were away. There is no weekend construction for this phase. Only certain weeknights will they work late for the pouring of cement.

Everyone agreed that thus far efforts by the construction crew to keep the street clean have been successful. It is hoped this will continue. Ditto for the presence of a crew member to direct traffic when needed- a valuable safety measure,

Condo reps were  then given the floor to air any concerns.

Cement trucks will be present soon for a six month period. Mr. Kunin and Mr. Aaron alluded to Phase One when these trucks parked on Lismer and they were cleaned, leaving behind  a very large mess. They asked that this not be repeated. Mr, Doudak took note.

The presence of the generator at the side of the building resulted in a winter of misery for  many Rothchild I residents. The Equinoxe did not have a full Hydo-Québec hookup until April 14, so the generator was regrettably necessary to power their building. Efforts  were made to baffle the sound,  but this was not completely successful. Eddie Bornstein asked if the generator could be moved inside the building. Mr. Doudak said this is not possible, but he made it clear that that the generator will not cause the neighbours any more problem. It will be tested once a week for a few minutes, likely mid-morning during a weekday. The only time it will ever be used again is in the event of a power failure. Should such an event occur, the Rothchild I will be in the same boat.

Mike Cuplowsky suggested that a temporary fence be erected near the excavation area as a safety precaution. He also asked that attention be given to a generator placed in the back of the building and whether it is necessary.

Jason Ullmann asked about the makeshift parking lot next door. Mr. Doudak said his workers will be using it this summer. Councillor Cohen noted that it will be returned to greenspace after the construction concludes in the summer of 2020. It is his hope and mine for this to become some kind of parkland.

Syd Rosen expressed his appreciation for the cleaning efforts thus far. He was also pleased  to hear workers will park in the lot and not take up spaces on the street. Dust does tend to come from the construction  and effect the air conditioning units of some residents.

Mr. Doudak shared with the group this company purchased the former Manoire Montefiore seniors home at  Mackle and Cavendish last year. They are gutting the inside and building about 100 new rental apartment units. They will also be repurposing the main floor for additional garage spots. More news to come on a name and potential opening date.