It was Groundhog Day for me and many others today at the CLSC René Cassin Test Centre. 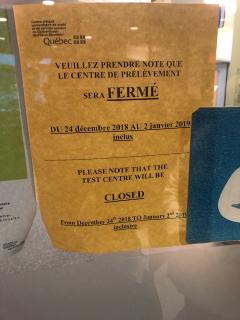 For the third day in a row I showed up at the Quartier Cavendish location for a blood test that required a 12 hour fast. On Tuesday, I read the sign in the window which said that the Test Centre would be closed from December 24 to January 2 inclusive. I called the CLSC hotline. Someone from the service responded and assured me it would be open on Wednesday. From the way the notice was written, it was difficult to tell. So again I woke up at 6:15 am while on holiday from work and headed over there. I was not the only one. At least 15 people joined me. Several us called the CLSC hotline. We were all told the same thing. It would open at 8 am. Test Centre hours are 7:30 am to 9:30 am weekdays so I found that odd. We all waited and at 7:50 am the lights went on.  There was hope until 10 minutes later a young lady opened the door and said blood tests would only resume Thursday. 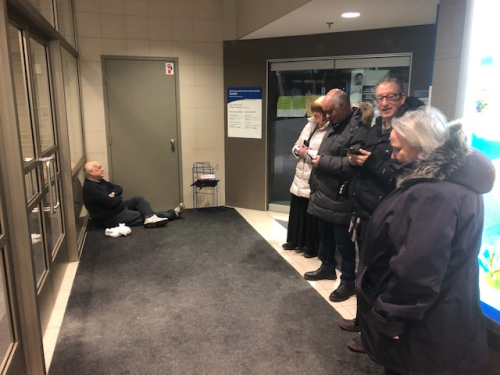 The CLSC René Cassin is a more attractive option for early morning blood tests than going to the madhouse at the Jewish General Hospital at that time. But it is hardly the novelty it used to be. I was there at 6:50 am. At this time there were six people ahead of me, mostly elderly. Fifteen minutes in one man, a constituent, could stand no longer and took a seat on the floor. By 7:25 am the lineup snaked up the hallway like a rock concert. We all shared the same comments. Why did the Test Centre have to be closed for such a long period of time? "Do they think just because it is the Christmas holidays we can all skip mandatory blood tests?" one lady asked. 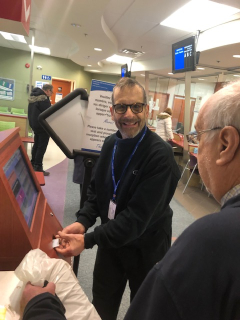 Harvey Hershenkopf has the magic touch with frustrated clients.

on duty making sure people got the numbers. All of us were so happy to sit down.

A memo to the CLSC or the Quartier Cavendish administration --could you not install some benches  or chairs in the outdoor waiting area where that nice big paid advertisement for Air Transat hangs on the wall? And here is a tip for some business people out there. The Idolem Hot Yoga studio next to the CLSC closed recently. A coffee shop open from 6:30 am in that spot would have made a bundle this morning for those not fasting or folks like me who had to walk  all the way to Maxies or Cafe de L'Avenue for a muffin or something similar after the test.

I did not count but there had to be at least 100 people in the waiting room, many standing. There were two people behind the counter processing the requisitions and two technicians drawing the blood.

With Gaetan Barrette no longer in office destroying our health system, perhaps the new CAQ government will give agencies like our own CIUSSS West-Central Montreal the budgets necessary to expand the hours  of these test centres and ideally have some afternoon hours. 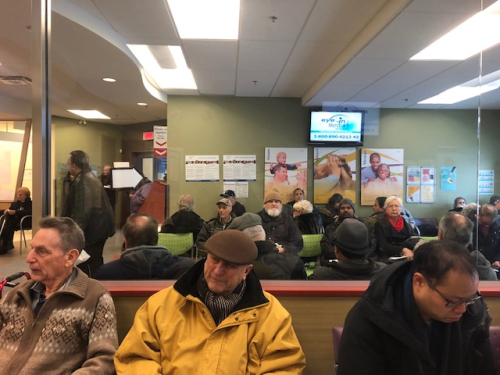 I was taken by 8 am and out soon after. The technician had already heard complaints from people who had lined up the day before. She asked me what they should do next year. "For starters," I said, "have your answering service properly briefed. Secondly, clearly spell out the date you reopen on the notice."

Why did I write this story? I was recognized as a city councillor pretty quickly  and as the crowd grew a de facto Town Hall meeting evolved. I tried  to read my newspaper and explain to everyone that the CLSC was not under the umbrella or the city, nor was the management of the Mall. I did finally make a promise to share their concerns in writing.

The staff were wonderful and kudos to Harvey for keeping the clientele in check.

Groundhog Day at the CLSC is finally over for me.

Posted at 10:14 AM in Cavendish Mall/Quartier Cavendish, Healthcare | Permalink | Comments (3)

I have found that the time for processing today was one hour. If you come at 7, and stand in line to get in the door at 7:30, or get there at 8:30 and sit down immediately...it still takes one hour. The advantage is that you still have a full day ahead of you, by coming early. The large hospitals take up to 3 hours, plus parking costs.The CLSC in Cote Ste. Luc is a bargain in comparison!

I bet today you would be extremely happy to have this situation, instead of the one we now find ourselves in.