Solidarity with Pittsburgh: Why I went to synagogue on Saturday

For more than a decade I have been a member of Congregation Tifereth Beth David Jerusalem on Baily Road in Côte Saint-Luc. However, my presence is generally relegated to the high holidays of Rosh Hashanah and Yom Kippur and special events.

When last week’s senseless act of terror occurred at a Pittsburgh synagogue, the gutless and disgraceful shooter probably thought that he would scare everyone away from attending services. His shameless actions had the complete opposite effect. In fact, he did more to unite Jews around the world than he could possibly have imagined.

The murders may have occurred in Pittsburgh, but every member of our community felt as if it happened in our very own backyard. How else can we explain the overwhelming turnout at a vigil at Beth Israel Beth Aaron Congregation in Côte Saint-Luc organized by the Centre for Israel and Jewish Affairs (CIJA) and the presence of such high ranking political leaders. Everyone recognized that such a tragedy could happen anywhere. 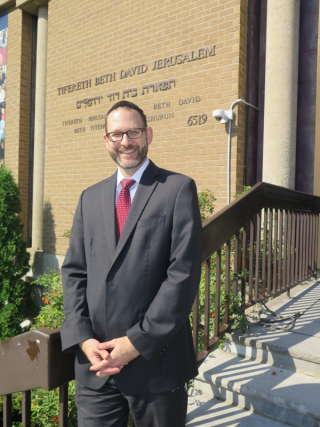 So on Saturday morning I did something different. I got up early and accepted the challenge being thrown out by rabbis across the globe to take part in a worldwide  Shabbat in solidarity with our brothers and sisters who were brutally murdered in Pittsburgh, as well as the victims who were injured. I went to synagogue. Councillor Dida Berku was there as well. Other councillors went to their synagogues.

Now TBDJ generally has a good attendance each Saturday. But regulars told me numbers there were indeed up. I must say I felt good being there. There were two security guards at the door. D’Arcy McGee Liberal MNA David Birnbaum addressed the congregation. And then came Rabbi Yechezkel Freundlich, just over two years on the job here and a man every person in that room lauds for his leadership. He spoke about the tragedy in his address, shared personal connections he has in Pittsburgh and then introduced our Police Station 9 Commander  who was visiting local synagogues with his show of support. While applause is rare at Saturday services, the mere presence of a police officer in uniform resulted in such a warm feeling that everyone started to clap.

During services a memorial prayer for the deceased, as well as a prayer for the recovery of the injured,  took place. Following services, everyone was invited to a community Kiddush sponsored by generous donors. Any funds raised over the cost of the Kiddush will be donated to a fund to aid the victims and their families.

“Unfortunately, as a consequence to the horrors of Pittsburgh, I spent much of the week dealing with the issue of security,” said synagogue president Jonathan Gal. “Many are concerned about our security at TBDJ this week and moving forward. I personally met with both the police and public security and they have assured me that despite the tragedy in Pittsburgh, there is no increased threat in Canada.”

Patrols past all synagogues were increased this past Shabbat. As well, Federation CJA has a security expert who consulted directly with the synagogues and he joined the Police Commander on his visits.

“We have been assured by the police that there is no increased threat and that all of the security measures that we are currently taking - and will improve upon – are sufficient,” said Gal. “However, the police maintain that the best possible security is us. They, along with Cote Saint-Luc Public Security and Federation CJA Security, ask all of us to be vigilant. If you see something strange or that looks suspicious, report it immediately.” 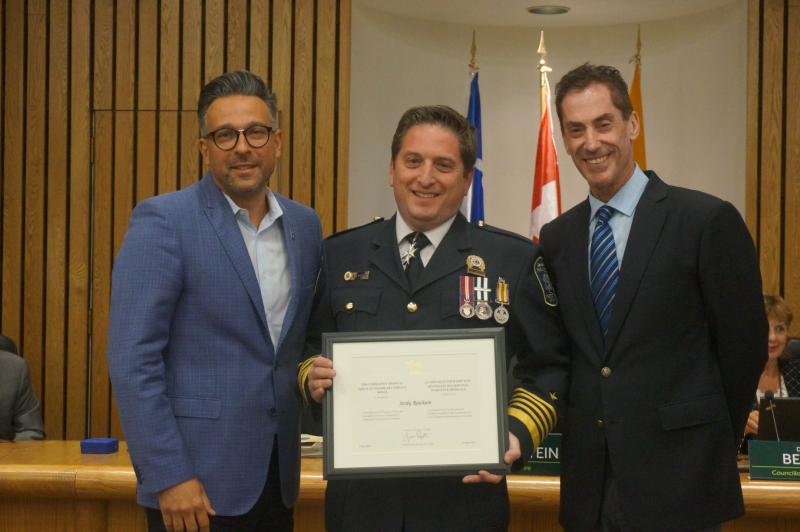 Allow me to give some thanks our Director of Public Safety Jordy Reichson, who took the lead on this matter with Public Affairs Chief Darryl Levine.

Jordy reports that at the vigil last week there were a total of 31 police officers from SPVM - plus two others on horseback assigned to the event, plus MSP protective service, three  public security agents, two Emergency Medical Services crews, RCMP protective service, 14 private security agents and Federation CJA Community Security. “The crowd was estimated at 1,200, including people standing in the aisles, sitting and standing the lobby and standing outside,” noted Jordy. “All large vehicles and trucks were stopped and checked by SPVM and escorted by police along Mackle, to prevent a truck trying to ram into the crowds. We had excellent communication and collaboration between all of the police and security services.”

The man who allegedly gunned down 11 worshipers at a Pittsburgh synagogue used three handguns and an AR-15 assault rifle in the 20-minute rampage and screamed to SWAT officers who wounded him in a shootout that he wanted "all Jews to die." If he is convicted, the death penalty will be pursued.

See this report from City News. from the solidarity Shabbat at Shaare Zedek Congregation in NDG where Mayor Mitchell Brownstein was among those in attendance and spoke.

Well said Mike.
Peter and I went to Shaare Zion and community solidarity was very evident. There were 2 Imams representing the Muslim community as well as many others who attended to show support. I'm proud of the turn out usually seen at High holidays. Our global community recognizes changes in our society that will require vigilance and strong security partners. Never again!