Wiffle ball is a variation of the sport of baseball designed for indoor or outdoor play in confined areas. The game is played using a perforated, light-weight, resilient plastic ball and a long, typically yellow, plastic bat.  Organizers of the local Wiffle ball league want to construct an actual stadium modeled around the old Jarry Park, the original home of the Expos. See photo below. 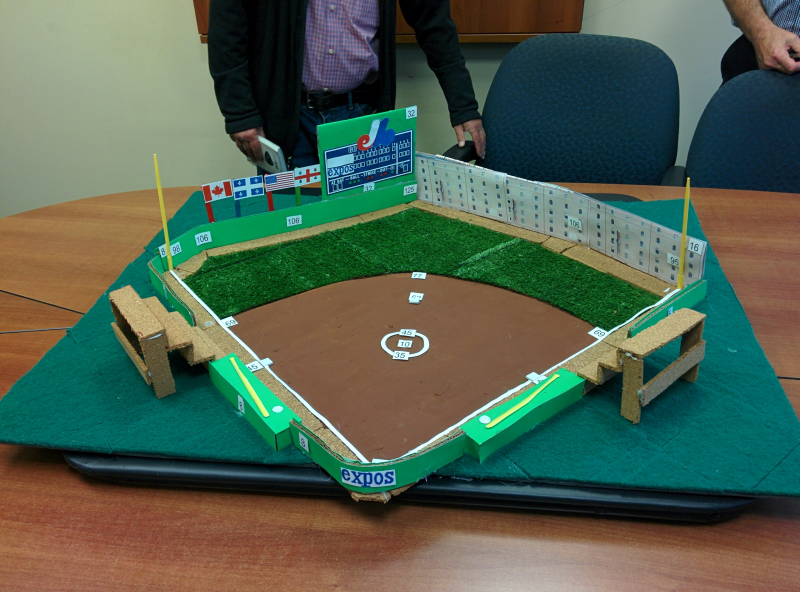 Mark Rabinovitch,   a cardiologist practicing at Clinique MedicElle, told me that  he started playing Wiffle ball with a group of friends from Côte Saint-Luc’s and the Montreal General Hospital around 1999.  “We played our games at Macdonald Park, and when we heard about a Wiffle ball tournament in the US, a group of us went to South Bend, Indiana to compete,” he says.  “We were outclassed,   but had a memorable time. Our love for Wiffle ball led us to hearing about another aficionado in Jericho, Vermont, who built a Wiffle ball field named Little Fenway. We made about three trips to Little Fenway  and that site has grown to include Little Wrigley and Little Field of Dreams.”

About  three years ago, Harold Cammy  from our Parks and Recreation Department invited the group to start playing at Kirwan Park. They now have a pool of about 25 players and compete with teams of five to eight on each side, every Sunday morning from May until the end of September.  Singerman Park serves as their base. Players range in age from nine to their late 70s.  There are three   father and sons players and daughters have played, too.  “The games are fun and not too competitive,” Rabinovitch says. 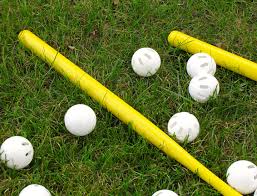 Our council has  allocated funds for a dedicated Wiffle ball field at Singerman Park. Rabinovitch and his group want to call it Expos Park at CSL Yards as a homage to the Expos and Camden Yards. City Council has yet to discuss the name and I am told this will be placed on an upcoming agenda. 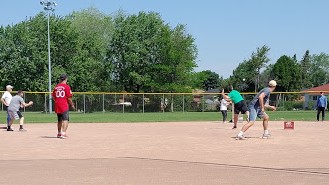 “Wiffle ball is a game I used to play in the country with my cousins and neighbors, including kids of all ages and our parents,” noted Dr. Rabinovitch. “That is one of the attractions - it doesn't require any expensive equipment or special talent to go out and have fun together.

I love baseball, but as we all know, a softball can hurt, if you're hit. The wiffle ball  is a plastic ball, with several holes, designed to throw curve balls, and other tricks. That's all Wiffle ball requires - a plastic bat and ball. A friend of mine even sent me an algorithm, showing how injuries from a wiffleb all are almost nonexistent.”

I must admit I have not seen any games yet. But next season I will make it a point of doing so, perhaps even offering to step in as a pinch hitter.

Great! All we need is a swimming pool in right field and Willie Stargell to hit balls into it.

The Chevy Volt plug-in hybrid hatchback wins points for its good infotainment system, practical trunk, smooth driving characteristics, and its astonishing electricity-only range, which exceeds 50 miles. It's not as efficient in hybrid mode as competitors, but if you have somewhere to charge it up on a consistent basis, the Volt will likely cover most or all of your daily commute without using any gas. It might even be a good lease option for someone considering switching to an electric car but who isn't ready to live with range anxiety. But if you don't have ready access to a charging station, you might want to consider a more fuel-efficient conventional hybrid.

This household name was the first to bring hybrid cars into the mainstream, and it's still one of the best hybrid cars you can buy. It offers abundant cargo and passenger space, it's impressively efficient, and it's supremely easy to drive. Taller drivers may have more trouble finding a comfortable driving position, and the Prius isn't as engaging to drive as some of the other vehicles on this list, but we should add that the current model is easily the most responsive Prius yet. Any way you slice it, the Prius is a top pick for a practical, easy-to-live-with hybrid. Notably, there is also a plug-in version of the Prius called the Prius Prime, but we've been less impressed by that model — it didn't make the four-star cut for this list.

Dragon Maiden is the perfect game https://www.slotshub.co.uk/slots/dragon-maiden to play if you’re looking for stunning visuals and a brilliantly executed theme with plenty of features. You can win re-spins, free spins and even Golden free spins in Dragon Maiden, and luckily, the dragon scatter appears fairly frequently in this game.

That means that you’ll enjoy frequently-triggered features and great prizes. Play’n GO has made it easy to earn great prizes as even if you don’t land three dragons on the reels, just two will earn you re-spins! There’s everything to love in Dragon Maiden, not to mention the beautiful maiden herself.

Luxury marques are adding hybrid systems not just for better mileage, but also for the instant torque delivery of an electric motor. In general, these hybrid models are quicker than regular gas versions of the same model, as well as being more efficient. It's also worth noting that all of these luxury hybrids come standard with all-wheel drive. For most, the focus is on refinement rather than all-out efficiency gains.

The Lexus RX balances a roomy cabin with impressive performance. It's a well-built midsize luxury SUV with one major weakness in the form of Lexus' clunky, mouselike infotainment interface. The hybrid model comes with a price premium, but it improves on the standard car's acceleration and especially its fuel economy, with no undue hybrid weirdness to sully the driving experience.

Volvo's been on a roll recently, producing vehicles that look gorgeous both inside and out. The latest XC60 is no exception, combining stellar craftsmanship and sleek technology in a thoughtful and practical SUV. The T8 PHEV isn't our favorite version of the XC60: There's plenty of power, but the hybrid isn't as pleasant to drive as its gas-powered sibling, and it comes with a notable price hike. That doesn't change the fact that the XC60 is one of our favorite luxury SUVs, and the hybrid doesn't have much competition. We also didn't have any issue meeting — and sometimes exceeding — the estimated all-electric range in the real world.

Hear the terms hybrid, plug-in hybrid or electric car and you’ll probably think of a model like the Toyota Prius hybrid or all-electric Nissan Leaf. These popular alternative-fuel cars don’t represent the full story, however, because the engineers of sports cars, performance saloons and even fast SUVs are using those advanced technologies, too.

There are several reasons for this, the first of which is just the same need to save fuel and cut emissions as applies to the Prius or Leaf. Manufacturers have to meet increasingly tough legislation on engine emissions across their entire model ranges. If a manufacturer spends billions making its superminis, hatchbacks and crossovers emit less CO2, it’s no good to have a dirty range-topper skewing the figures.

As media attention increasingly focuses on pollution from the tailpipe, customers are also demanding cleaner models. Even those who can afford a sports car might not enjoy stopping for fuel every couple of hundred miles or the negative image of a ‘gas guzzler’. Driving a car with high emissions also brings higher taxation and could even limit access to major cities like London if bans are introduced in the future. In contrast, many of the sports models on this list are eligible for the government’s Plug-In Car Grant and are exempt from the London Congestion Charge.

Engineers have also found hybrid and electric technology can make powerful models even faster and better to drive. Electric motors are relatively compact and can provide instant thrust to the wheels without a traditional gearbox. One or more electric motors placed around the car can supplement the power of an internal combustion engine or replace it entirely.

In models like the Honda NSX, adding electric motors to wheels other than those powered by the petrol engine can effectively make the car four-wheel drive. This can boost traction, grip and safety – even in poor weather conditions. It also opens a Pandora’s box for manufacturers, because electric motors can juggle power between the wheels almost instantaneously, allowing for even greater agility.

The list below includes sports cars, but also the best alternative-fuel saloon cars and SUVs for keen drivers who want excellent performance. If you aren’t as worried about going quickly, take a look at our guide to the best hybrid and electric cars, or for a more focused approach, our round-up of the best electric cars, best hybrid cars or best hybrid SUVs.

Here's what we thing are the 10 best hybrid and electric sports cars you can buy today.