On the eve of Rosh Hashanah, the Jewish New Year, local dentist and District 2 resident Harry Rajchgot has written his second book called The Sweetness of Life: My Mother’s Jewish Cookbook. It is a tale of where his parents came from in Poland, how they arrived in Canada and the language of Yiddish. In each section there is a storyline and one of his mom’s recipes, a unique concept to be sure. 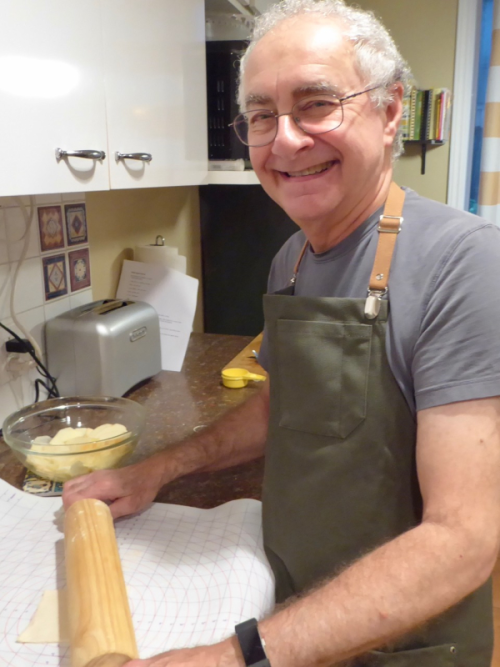 Harry in the kitchen.

Dr. Rajchgot spent more than 20 years writing his first novel called Gravitational Fields, released in 2016. The writing began at the time his father became severely ill in 1994. It gives a fictional account of a family of Holocaust survivors struggling to overcome their past, based on the stories of many individuals and families who went through similar experiences.

After Dr. Rajchgot’s mother’s death, he found among her effects an invoice book from a Montreal furrier where she had worked. Many of the pages were covered in Yiddish script in his mother's difficult handwriting. After glancing at a few of these, he recognized  some” of the Yiddish words and realized that these were recipes. Similar material was also written on odd pieces of cardboard, from Kleenex boxes or the cardboard that came with shirts from the dry cleaner.

“Too busy to deal with them at that moment, I put all these aside in a box, for later examination,” he explained. “About a year ago, seven years after my mother passed away, I looked again. I had recently heard of a call for submissions of possible projects by the  Foundation for Yiddish Culture, asking for material that would emphasize the role of the Yiddish language in recent Montreal history. Yiddish had been my mother tongue, although, for the most part, I had forgotten how to speak the languge. With a certain degree of curiosity, I applied, proposing to turn my mother's Yiddish recipes into a book which would explore my family's journey from pre-war Poland to Montreal in the recent past, and use this book to show the original recipes, in their Yiddish cursive, with translation into English, interwoven with my family history, the history of the Yiddish language, and a glossary of spicy, salty, and sweet Yiddish words, terms, and phrases. And to my surprise, I was given the approval to develop my project.”

The translation of the 70 odd recipes took a good six months. To a large extent, Dr. Rajchgot had to bring back the memories of the Yiddish he had learned as a child, and then try to read his mother's difficult handwriting, translate the words, and give them context. “I saw that each recipe was attributed to one or other of my mother's network of women friends who had dictated these recipes to her,” he said. “Most had a similar background as my mother, Holocaust survivors who had come to Canada after the war and made a life in this country. Interwoven with these was the theme of nourishment of young families, and the sublimated memories of past fear, deprivation and hunger. What was remarkable was that most of the recipes were for sweet things–cakes and cookies and other desserts. This gave the book its name: The Sweetness of Life, a somewhat ironic title considering my mother's difficult past.”

Of the recipes, Dr. Rajchgot only chose a handful for the book. The recipes, once he had translated them, were deficient in many ways compared to what one would find in a conventional recipe book: units if measurement were rudimentary and often unclear. Some Yiddish words were unreadable, and untranslatable, quantities, directions on how to mix ingredients, oven temperatures and baking times were mostly missing. There were also a number of repetitions: Mrs. G's honeycake, Mrs. M's honeycake, Mrs. L's honeycake, and so on. And yet, after two attempts to follow one cheesecake recipe, with a bit of intuition and some guesswork, yielded a surprisingly delicious European-style chessecake as a result. 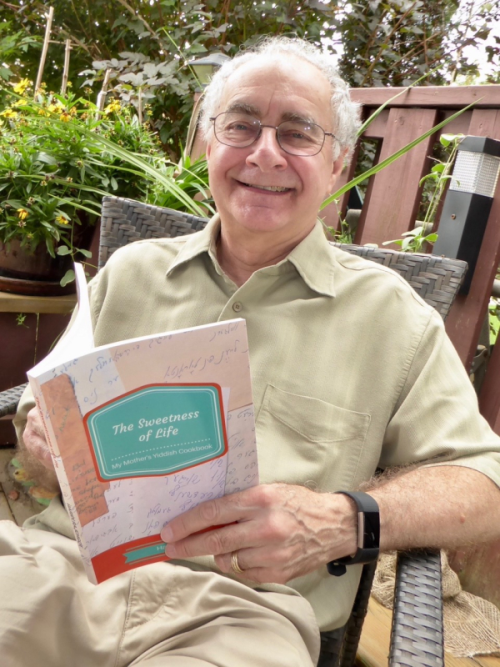 The book was successfully launched recently at the Museum of Jewish Montreal (St. Laurent and Duluth.) and is now available on Amazon  in both print and ebook formats. It’s short, only 125 pages, and has plenty of images and photos, so it’s a quick and easy read, unlike his novel. It is also available at Bonder’s Bookstore on Westminster Avenue in Montreal West, Argo Bookshop on St. Catherine Street West and the Côte Saint-Luc  Public Library.