For the first 10 years of my city council career in Côte Saint-Luc, I worked under Anthony Housefather as mayor. He is an extraordinarily gifted man whose ultimate dream was always to become a Member of Parliament. In 2015 that became a reality when he won a hard fought election to represent the Mount Royal riding.

It is no exaggeration to say that Anthony has probably been the MP who has made the strongest effort to maintain close relations with his constituents. When he is not in Ottawa, he never misses a public event. He remains a proud resident of Côte Saint-Luc and luckily one of my constituents in District 2.

One of the many excellent initiatives Anthony introduced was something he calls Anthony’s Assembly. Throughout each year he rotates between  Côte Saint-Luc, Hampstead, Town of Mount Royal and Côte des Neiges to hold Town Hall style meetings where constituents can be brought up to date on his activities. The most recent such gathering was on August 22 at CSL City Hall where a nice crowd gathered.

A fabulous public speaker, Anthony does so without notes.  At the Assembly he spoke and answered questions for nearly two hours. There was not one question he did not have a good response to, be it relations with the United States, the recent spat with Saudi Arabia and refugees and immigration.

Anthony was very proud to remind everyone  that the City of Côte Saint-Luc is a finalist in the Smart Cities Challenge. We have already been allocated $250,000 by the federal government to fine tune our project which makes sure seniors are well cared for. Two District 2 residents, Charles Guerin and Marc Chriqui, have been integrally involved. There are eight finalists and the winner takes home $10 million from the federal government so stay tuned. 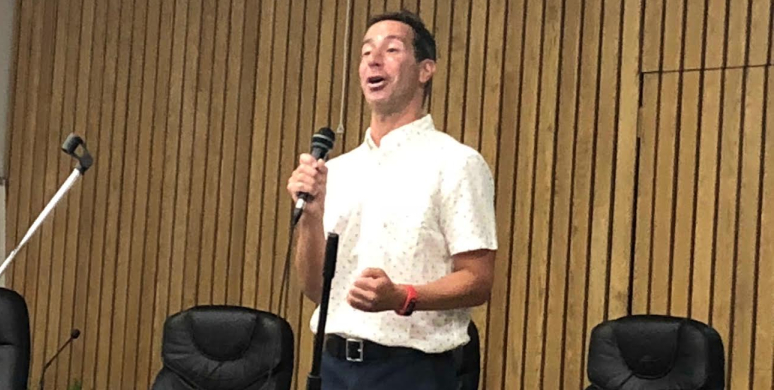 “One of my roles as an MP is to bring money into this  riding,” said Anthony, who has done exactly that in so many ways over the last three years.

On the battle with President Donald Trump over tariffs, Anthony said: “I think this will be withdrawn when NAFTA is signed, but you can never be sure.”

The Trudeau Liberals have taken some hits regarding its position on Israel,  but Anthony shared some significant data which shows that the his government does in fact have the best record at the United Nations in opposing anti-Israel resolutions: 87 percent compared to 61 percent for Stephen Harper’s Tories, 19 percent for the Paul Martin Liberals and 18 percent for Brian Mulroney’s Tories.

Anthony noted that 31 percent of the Mount Royal riding is Jewish and as a result he gets an overwhelmingly large number of emails related to Israel. As a result he and Toronto Jewish MP Michael Levitt work exceedingly hard on quarterbacking all of the important Jewish dossiers.

Bravo to Anthony for a job well done!