It was about a year ago that as the city councillor for District 2 in Cote Saint-Luc I shared with my colleagues a desire to finally give a name to the laneway that leads from Marc Chagall Avenue to the Library/Bernard Lang Civic Centre parking lot.  It is a beautiful area that we dressed up substantially with newly paved path and more benches.

Initially my thought was to name it simply Library Lane. But when I raised the subject on the Let’s Chat Facebook page, community activist Tamar Hertz private messaged me with the idea to honour the memory of Leonard Cohen. I promised her that I would bring this up after the November elections.

Soon after the newly constituted council took office, Leonard Cohen Lane was approved. I then worked with our Chief Librarian Janine West and Public Affairs and Communications Director Darryl Levine to set the wheels in motion. We scheduled the unveiling ceremony for the end of August, hoping for a nice summer night. 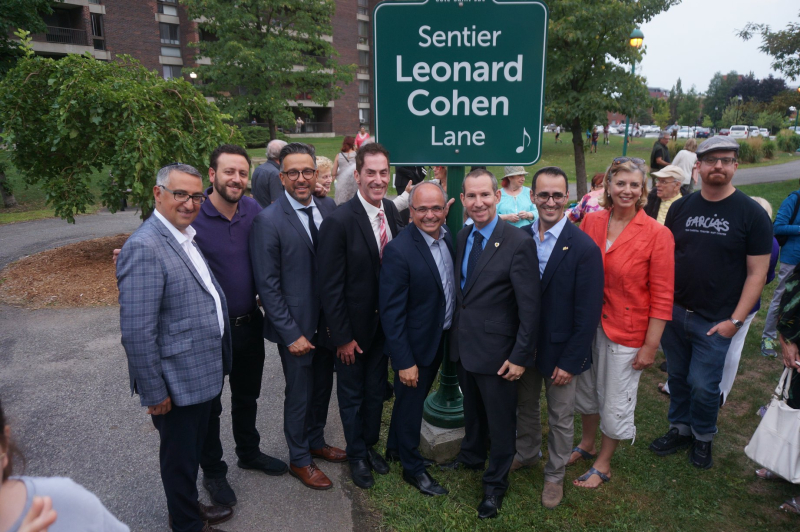 The August 27 inauguration was a fabulous event which frankly gave me goosebumps.“We honoured Leonard Cohen in Côte Saint-Luc because of the influence he had through his words and music,” Mayor Mitchell Brownstein said. “Arts and culture are important to Côte Saint-Lucers and adding his name to  the landscape here is another way to recognize that fact.”

While Leonard Cohen never lived in Côte Saint-Luc, his early years were similar to many of his contemporaries who ended up in the community. He attended Roslyn Elementary School, Herzliah High School, Westmount High School, and McGill University,   loved books and words and combined the analytical mind needed for debating -- which he did at McGill -- with the creative mind of a writer and thinker. He is all the things Côte Saint-Lucers revere and his name will be a fine addition to the landscape of Côte Saint-Luc. 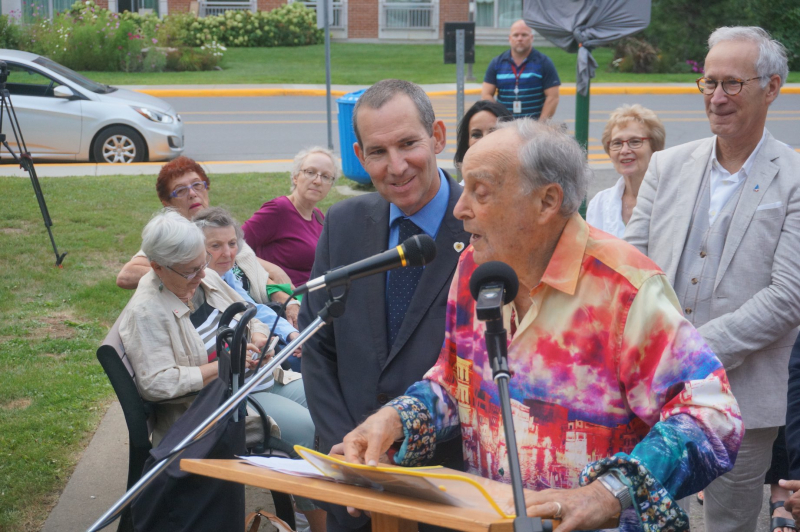 A childhood friend of Leonard Cohen, Raphael Fleming, attended the ceremony and talked about Cohen’s early years. Councillor David Tordjman, who holds the Library and Culture portfolio and   co-hosted the ceremony with me, noted that  the  Library will be putting Leonard Cohen materials on display the week of the inauguration. In addition, the library will have a special film screening of Leonard Cohen: I'm Your Man on Wednesday, August 29 at 2 pm.

Cantor Danny Benlolo from  Shaare Zedek Congregation and his nephew performed a fantastic rendition of Cohen’s Hallelujah” and the entire audience sang along with big smiles. We had a very nice turnout, including cameras from CTV, Global and CBC.

It was also nice to see impresario Ruben Fogel and his communications chief  Arlene Slavin, a proud CSL native, on hand. They worked  closely with Leonard Cohen and do so now with his son Adam Cohen, whom they shared the good news of our inauguration ceremony. Janine West and I have something on our wish list: an Adam Cohen concert at the library.

D'Arcy McGee Liberal MNA David Birnbaum, who paid a tribute to Cohen in the National Assembly after he died, also gave some words of tribute.

Leonard Cohen (1934 – 2016) was a legendary Canadian singer-songwriter, poet and novelist. He was born in Westmount, Quebec. His father, who ran a well-known clothing store, died when he was nine. He pursued undergraduate studies at McGill University and became president of the debating union. He flirted with a legal career and attended McGill law school for a year after completing his bachelor's degree. He also went to Columbia University for a year. But literature had a stronger call than litigation.

"Let Us Compare Mythologies," his first book of poetry, was published in 1956 when he was an undergrad. The "Flowers For Hitler" poetry collection and the novels "The Favourite Game" and "Beautiful Losers" followed in the 1960s. He established himself as a poet and novelist of renown by the age of 32, Cohen decided that songwriting might pay better. Leonard cohen

A big break came in 1966 when Judy Collins recorded his standard "Suzanne," and he came out with his first album "Songs of Leonard Cohen" the same year. That was followed up with "Songs from a Room" in 1969, which included the popular "Bird on the Wire." He had a fairly steady output although his popularity dipped in the 1970s as disco, not doom, was deemed to be the treat for consumers' ears. But Cohen began a comeback in 1984 with "Various Positions," which included "Hallelujah."

Click here to see our video of the ceremony.