Hydro-Quebec has returned to Côte Saint-Luc to do another inventory of land where they have servitudes.

Hydro-Québec’s servitudes, or easements, include certain rights and restrictions:

Together with Hydro, Côte Saint-Luc Public Works Department Director of Operations John Monteiro always rings the doorbell first before going onto the resident's property, even though  Hydro legally has all rights to enter. They are very polite and the Forestry Technician explains why he is there, that he is doing an inventory of trees that are within the six-meter radius from the closest transmission line. 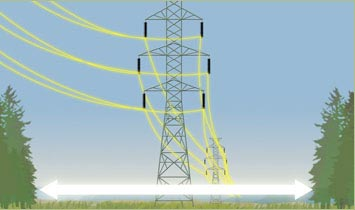 John hands out his business card and the resident receives a letter like this.  It explains why Hydro must perform these important operations for safety measures.

On August 7 our Public Works Department advised me of the following:

Nobody likes to see trees felled. Some residents have called to express their concerns, especially those who looked out at this beautiful landscape. If they do not own that land and it falls on a Hydro servitude legally there is not much they can do. Property owners  do have the option to request a change in servitude. The necessary information is here.

In the case of the Meadows I am not pleased at all that this work was done without any prior consultation by Hydro. There has already been a strong line of communications between Hydro and the Meadows board, especially lately due to an attempt by them to replace the grid. I, as the councillor, only learned about this after the work was done.  I do not fault our staff. I expect more from Hydro. Why the rush and did all of these trees really need to be cut down? Did they not learn from the vote last May not to allow them to proceed with certain work due to "a lack of consultation?"

Our Public Works Department states the following: " The only reason that Hydro  arrived in the city today, was that they are doing an inventory of possible problematic trees that could create an arc from the tree/bush to the transmission line. Only an inventory is being conducted. And only once the inventory has been completed, shall Hydro contact the city with a plan of action that will be suitable for all. Every resident that will be affected will also be contacted in advance with all pertinent information."

Here is a video from resident Charles Guerin as to how Hydro previously felled trees in an irresponsible manner at the Meadows:

I completely agree with you. I really like this article. It contains a lot of useful information.

Wishing you the best of luck for all your blogging efforts.This is my first opportunity to chat this website
I found some interesting things and I will apply to the development of my blog.

Thank you, I have recently been searching for information about this topic for ages and
yours is the best I have discovered so far.
top trending dramas of May