Côte Saint-Luc  hosted a wonderful unveiling of the public art sculpture Partenaires/Reliance at Ashkelon Gardens in District 2  on August 13. 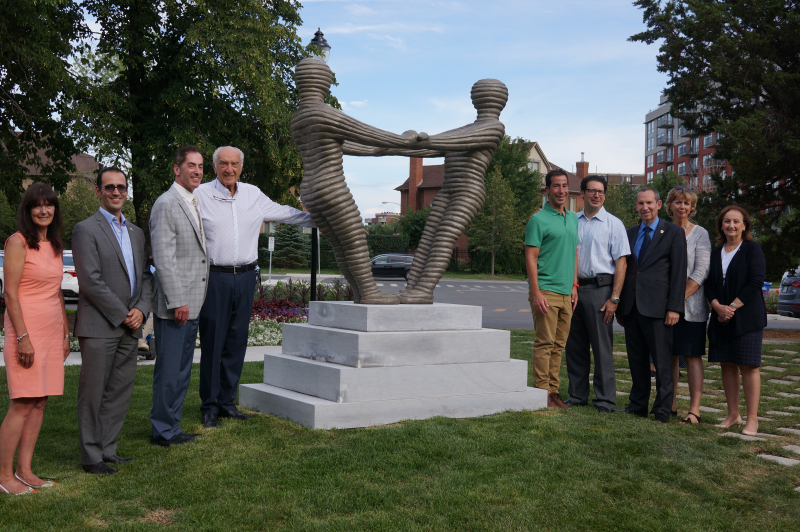 “Dr. Rosen's philosophy is to donate his art to institutions to which he shares their values,” Mayor Mitchell Brownstein said. “Our library was a natural fit and we had the perfect place for it in Ashkelon Gardens behind the library.”

Dr. Harry Rosen has enjoyed a successful career as a dental surgeon and professor at McGill University. He began working with stones at his country home in the Laurentians and developed his skills as a sculptor using the flat layers of sedimentary rocks, which he acquired around his country home property after breaking rocks apart with a sledgehammer.

The sculpture shows two people facing each other and holding hands as they lean backwards. The plaque inscription reads: “When communities build libraries, libraries build communities.”

“Public art has community-building potential,” Dr. Rosen said. “Not only does it create more beauty, joy, and connection in the world, but it has the ability to tell stories. In effect, it tells the library’s story. A library’s greatest asset is its ability to connect with people building relationships and creating partnerships.

“This is the message of Partenaires-Reliance. I always felt that we humans are social animals and rely on each other. We don’t live alone. The sculpture tries conveys that message.” 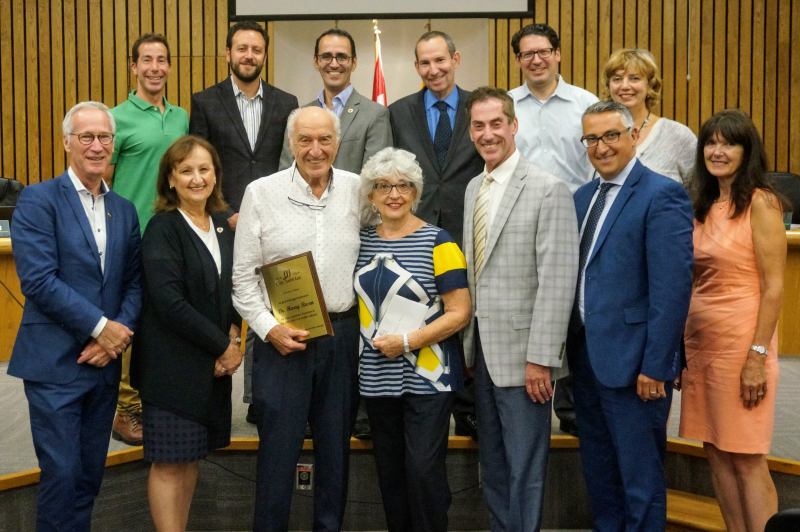 I was pleased to be asked to speak with you today regarding Harry Rosen’s latest installation.   While it is easy to admire the innovation, the craftmanship and the feats of engineering that resulted in this sculpture, landing in front of this library, it is the artist that I would like to focus on now.  In doing so, I hope you will gain an even greater appreciation for the work he has created as it is very much an expression of himself and his world view.

Joy Rosen, Dr. Rosen's daughter, beautifully explained  how this second career or hobby evolved. “How fitting that a first generation Canadian would choose big hunks of the Great Canadian Shield as the material for his artistic expression,” she said. “And how ironic that this denizen of St Urbain Street, whose Jewish immigrant parents saw peril lurking around every corner and who counselled him to ‘work hard with the head, not the hands’ would create two ton works of art, that would, if toppled, annihilate a bungalow.”

Joy described her dad as a studious, much loved third child, who through will, intelligence, and an abiding commitment to excellence, propelled himself into McGill, then dental school and then into the upper echelons of his field, never allowing lack of privilege, adversity, or bad weather deter him.

“And just as Harry created his own narrative from the rough environment that he was born into, he seems to thrive in all kinds of rough environments,” Joy said. “Skiing down frozen mountains during snow storms, digging in 100 degree heat in archaeological ruins, and riding through the woods on the backs of frisky horses.   So, when he started to re-distribute the landscape at our country house, by hauling huge boulders out of the lake with a series of winches and pulleys, it was clear that our dad would never be joining a golf club. By the time the first perfectly engineered stone terraces began to dot the property, we knew, he was not merely trying to avoid drying dishes, but that it was another step in his lifelong project: to work with whatever nature gave him and make it better.”

Until now, Dr. Rosen’s art has touched on themes such as: Self Reliance & Ambition with Assent: Personal Strength with Little Hercules and then finally “we are stronger together” with The Connection.  “With this latest work, Harry’s oeuvre has taken another turn,” Joy explained.  “For the two figures cantilevered together, convey unequivocal trust and complete synergy between the partners. Together they are one and can spin together just like the world on its axis.  However, if one or the other partner were to let go, both would tumble.  In speaking with my dad about this sculpture, he indicated that it was like his relationship with my mother, Delores, over all the years of their marriage.  If you examine the work, it is easy to see that.  They spin together in beautiful balance, never breaking their hold.

“Our family is so lucky to have such an inspiring role model although there is not one among us that would not admit that he is a tough act to follow.  Harry is an incurable optimist with no illusions that creating perfection requires a lot of really, really hard work. And yet, I don’t think he’s ever found himself between a rock and a hard place that he could not engineer into something awesomely positive.  This is, both as an artist, as a human being, his gift, his message and his legacy.”

Congratulations to Library Director Janine West and her staff for the work they did on this project.