Phase One of the Équinoxe Condo Apartments on Marc Chagall Avenue in District 2 will welcome their first residents in early July. Eighty-five percent of the building has already been leased. Excavation for Phase Two is expected to commence in August, with the completion of the entire project likely to take 18 to 24 months. 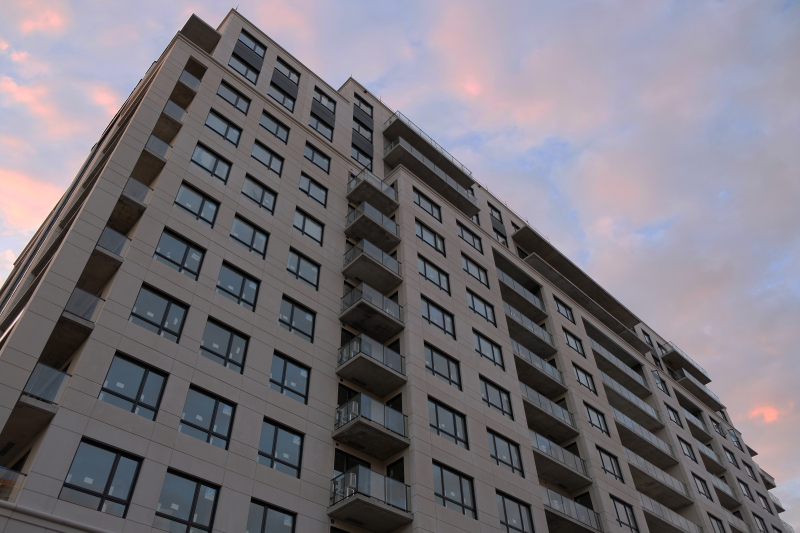 A look at the facade of Phase One.

For residents of the five neighbouring condominiums (four high rise and one town house complex) this is probably not the greatest news. There will be more dirt and noise to deal with. We have had a good dialogue with the developers from day one  and we will reset the clock before Phase Two starts 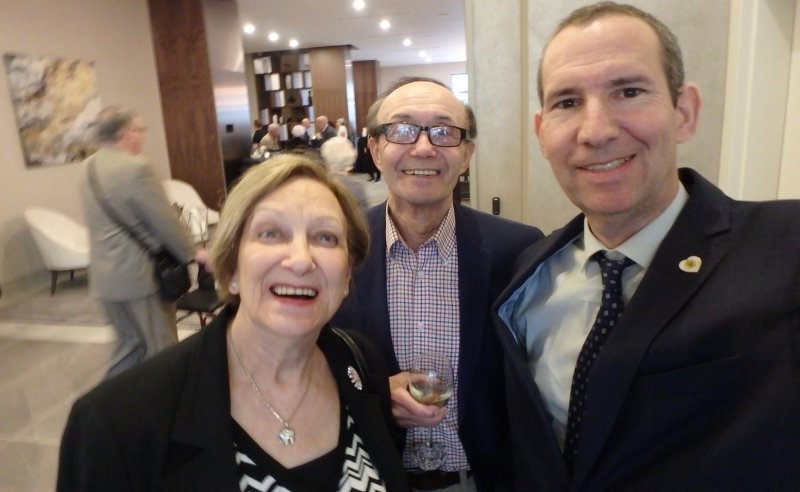 It was very interesting to confirm in person what I already heard via word of mouth for some time now. A strong percentage of the new tenants not only presently reside in Côte Saint-Luc, but  when I attended a special cocktail dînatoire on June 7 in the magnificent and gigantic lobby of The Équinoxe I saw a number of present-day Marc Chagall Avenue residents who intend to move in. And there were others who dropped by, liked what they saw, and now plan to call a real estate agent. The red carpet was out for invited guests.

“I am 86 years old,” one long-time Marc Chagall Avenue resident told me. “It  makes a lot more sense for me to sell my condo and move in here. Now I just have to convince my wife.”

Said a woman who resides in the same building. “I want to sell my place tomorrow, but it is not so easy.”

Someone who I know very well sold his condo a few weeks ago and can’t wait to move in. “You will still be my city councillor,” he said. “The movers do not even need a truck. They can carry my furniture across the street. But seriously, for the amount of money I will get for my condo I am moving to the same street. It is a luxurious building, condo-style living. Just makes sense.”

I met Lionel Teitelbaum, who told me he and his wife have lived in the same Côte Saint-Luc home for 48 years. “We took a lease here and our home is not even sold yet,” he said.

Real estate superstar Anita Benabou Rozenblat was spotted at the open house. In the ultimate ringing endorsement, she helped her mom sell her home and chose The Équinoxe for her to live. 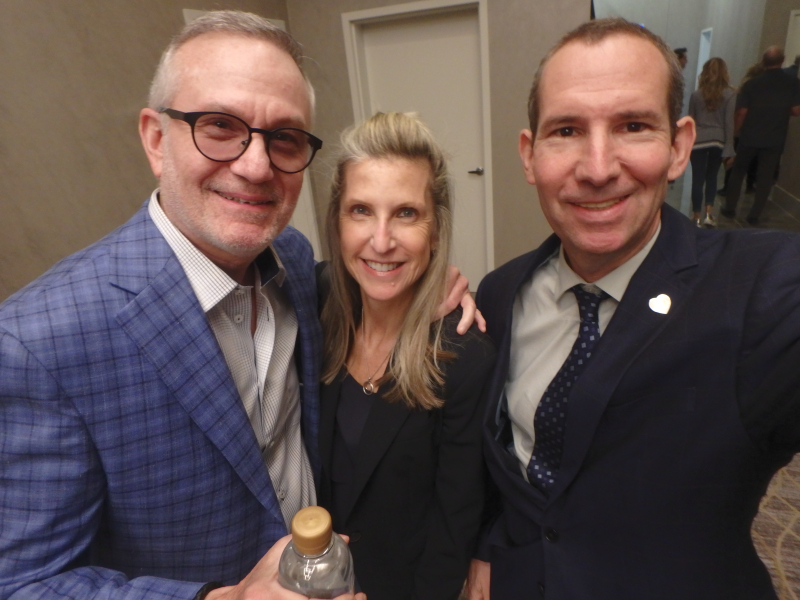 With Ron Robins and Arlene Blumer.

Ron Robins and Arlene Blumer are leaving their rental on Côte Saint-Luc Road to come here with their dog. They are thrilled. One woman told me she now lives at 1 Wood Avenue in condos fetching about $1 million on the market. “Can you believe  I am moving from Westmount after 21 years back to Côte Saint-Luc?” she asked me. “But this is where we want to be. Close to our kids. My husband is a member of the Men’s Club. It was the right decision.”

While the open house was meant primarily for those who have signed leases to get a sneak peek of the facility, manager Robin Slutsken also invited many people who merely visited her rental office. It was a good strategy for the browsers will soon become tenants, if not for the few remaining spots in Phase One but Phase Two. 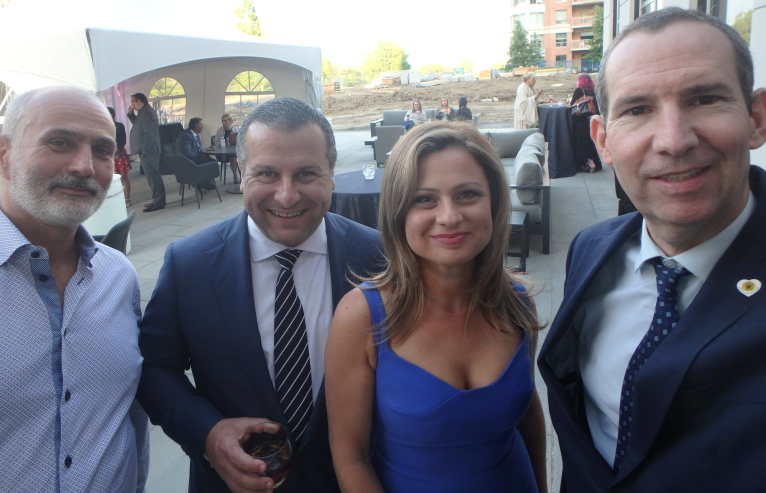 Developers André and Carole Doudak and Alex Bouhadana were the perfect hosts. Kosher caterers were hired. Guests enjoyed barbequed hamburgers, brochettes and French Fries on the patio along with an array of hors d’ouevres and later desserts. With a small band playing and shoe shine man working hard, there were also two open bars, wine and   a chance to see some of the apartments on the first floor, the weight room and meeting/party rooms. The exquisite lobby will connect for people in both phases. The band plays on in the front lobby.

I did take the time to meet  again with the developers and reiterate to them concerns being presented by neighbouring residents. I also had a chance to be introduced to their on the site foreman, which will be helpful to resolve future issues. 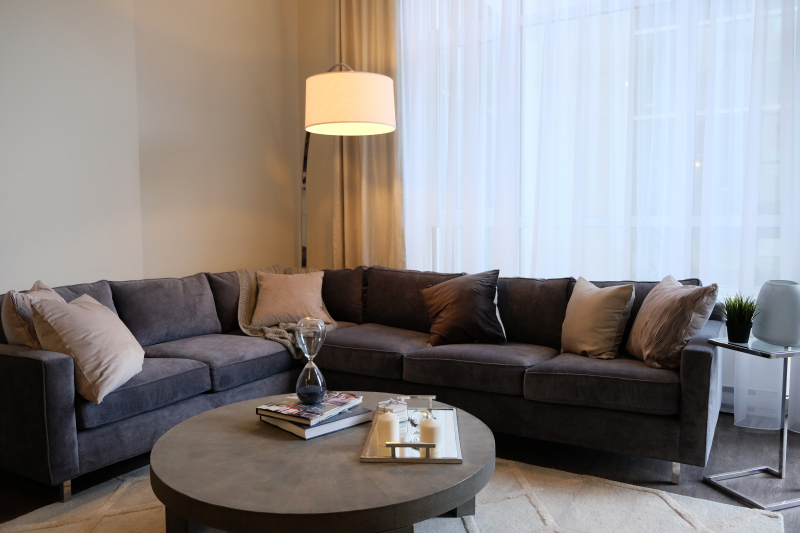 A look at one of the living room areas.

Work on Phase One only began in April 2017. The progress they have made during that time is quite remarkable. 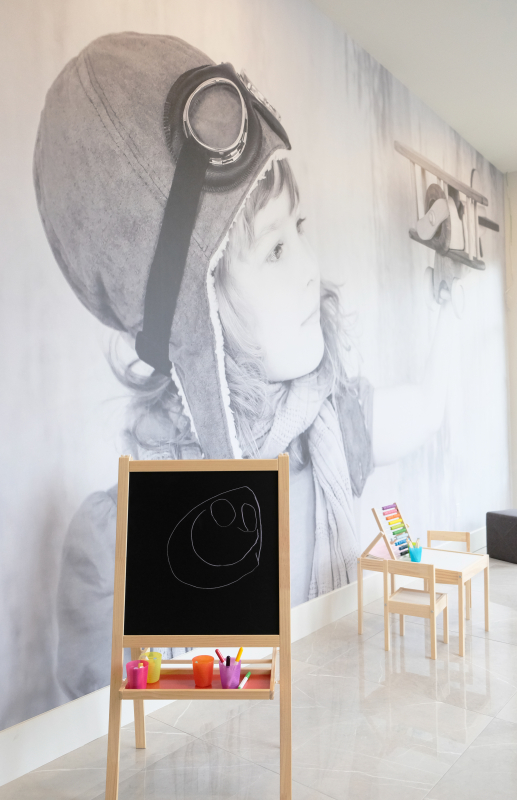 There is even a kids playroom.