The Côte Saint-Luc Dramatic Society  has indeed made a mark for itself in our community over the past seven years.

Their latest musical, Joseph and the Amazing Technicolor Dreamcoat, kicked off on May 30 with the first ever gala at City Hall. 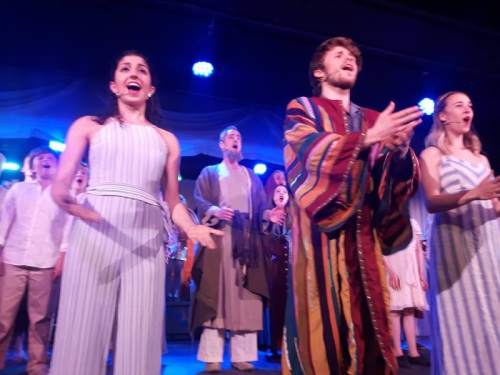 A scene from the show featuring Nicole Arrage and Sam Boucher.

More than 100 special guests attended a cocktail dinatoire, catered and sponsored by Blossom by the Plaza, with music and special performances  from previous productions.

Everyone then headed down to the Harold Greenspon Auditorium for a preview performance of Joseph, which brought the house down. It now runs until June 17. Some $40,000 in gala tickets and sponsorship came in, valuable dollars to support musical theatre in our community and to allow students, senior residences and people with disabilities to see the show. 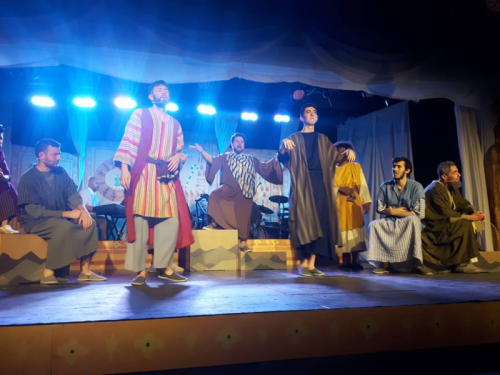 More action on the stage.

First off, a huge congratulations to Mayor Mitchell Brownstein and Councillor Mitch Kujavsky who served as co-producers and to the oh so incredibly talented artistic director Anisa Cameron for all of the hard work they did in the months leading up to the show. Musical Director Nick Burgess, Choreographer Alexia Gourd and the rest of the technical and creative crews did their usual knockoff jobs. The large cast  ranges in age from eight to 80.

Andrew Lloyd Webber’s  Joseph and the Amazing Technicolor Dreamcoat is an adaptation of the biblical story. The classic story is reimagined onstage as a rock musical, featuring iconic songs including “Any Dream Will Do” and “Close Every Door.” 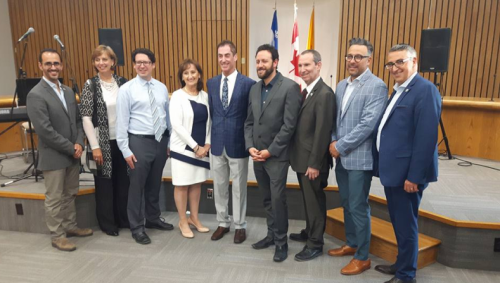 The mayor and all eight councillors were present.

¨Performing the title role is Sam Boucher, a young up-and-comer in the Montreal theatre scene who currently studies theatre performance at Concordia. A CSLDS veteran, Sam has performed with the troupe since the age of 16, and was more recently seen as Rocky in Mainline Theatre’s production of The Rocky Horror Show.  Due to a back problem he had to split the role in an interesting kind of way on gala night with Assistant Director Ryan Kligman. In some scenes Boucher  sat on the side  and sang while Kligman acted out the parts. Steve Korolnek, cast as Jacob, could not be there for night one either due to the death of his mother. Mayor Brownstein, already in the role of Potiphar, stepped in to play Jacob as well.Nicole Arrage (Little Shop of Horrors) and Jeanne Motulsky (Hairspray and The Producers), portrayed the show’s narrators.

Here is a look at Sam Boucher's talent

This show has such great music and dancing, many people will want to see it more than once.“I am so proud of the award winning company we’ve built over the past seven years,” said  Cameron. “Joseph and the Amazing Technicolor Dreamcoat offers us an opportunity to produce a show that will embody the spirit of community theatre, while challenging our team to continue to produce excellent, artistically rich and fulfilling work. I am also thrilled that this cast will be our largest since The Producers, and that, for the first time, we will have children in our musical production.”

"I am thrilled that we will be presenting this biblical story and supporting education in our community,” said Mayor Brownstein. “Youth are the future of our community and telling this story at schools while including children in our cast is part of our mission of bringing the joy of theatre to people of all ages.”

The Côte Saint-Luc Dramatic Society is a community theatre initiative that began in the summer of 2011 in partnership with the City of Côte Saint-Luc. The goal of the society is to bring together actors, writers, musicians and other artistically minded community members to produce theatrical works in an inclusive environment where emphasis is placed on team work and camaraderie, not celebrity.

Other members of the creative and production team are Stage Manager Emma Loerick,

Bravo to Ryan Nemeroff from Parks and Recreation, who works with other staff to make all of this happen.

Tickets are available online at CSLDramaticSociety.com, or in person at the Eleanor London Côte Saint-Luc Public Library or the Aquatic and Community Centre. General admission is $32, with $28 tickets available for students and seniors.