The Montreal Holocaust Museum held its annual Yom Hashoah (Holocaust Remembrance Day) commemoration on Wednesday, April 11 at 7:30 pm at the Tifereth Beth David Jerusalem Congregation in Côte-Saint-Luc.  Some 1,200 people were on hand.

This community-wide ceremony honoured the memory of Holocaust victims and the legacy of those who survived. Quebec Premier Philippe Couillard was in attendance for the third time by my count, once as the leader of the opposition. He came in the company of D’Arcy McGee Riding Liberal MNA David Birnbaum. 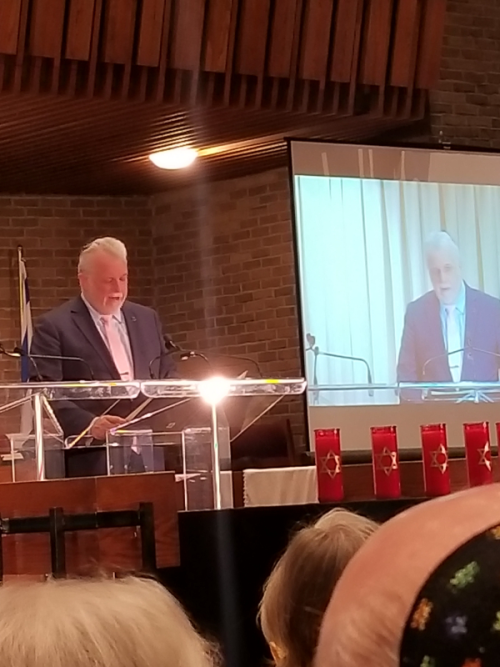 Following the singing of the classic Eli Eli, which figures prominently in all Holocaust Remembrance events, Committee Co-Chairs Doris Steg and Ruth Najman gave opening remarks in English, French and Yiddish, reminding everyone that Montreal became the third largest home to Holocaust survivors behind only NewYork and Israel.

“We are the last generation to hear their voices in person,” said Najman, a resident of District 2 in CSL. “This is both a privilege and a responsibility.”

Najman went on to say that on April 12 students from Montreal and around the world would be taking part in the 30th anniversary of the March of the Living and visit the former death camps of Auschwitz  and Birkenau in Poland.  Ironically, it was almost 25 years ago to the day that I took part in a mission to Poland to mark the 50th anniversary of the Warsaw Ghetto Uprising. I walked through the camps of Majdanek, Treblinka, Auschwitz and Birkenau in the company of survivors. It was something  I will never forget and one  I think every Jew should  experience  for themselves if they can.

Premier Couillard recognized former D’Arcy McGee Liberal MNA Lawrence Bergman, who was in attendance, for having Yom Hashoah officially recognized in  the National Assembly. He praised the Jewish community for its contributions to Quebec society and spoke glowingly about his visit to Israel last spring.

Newly arrived Israel Consul General David Levy spoke about his mother and grandmother who were from France and saved by a French family during the Holocaust. 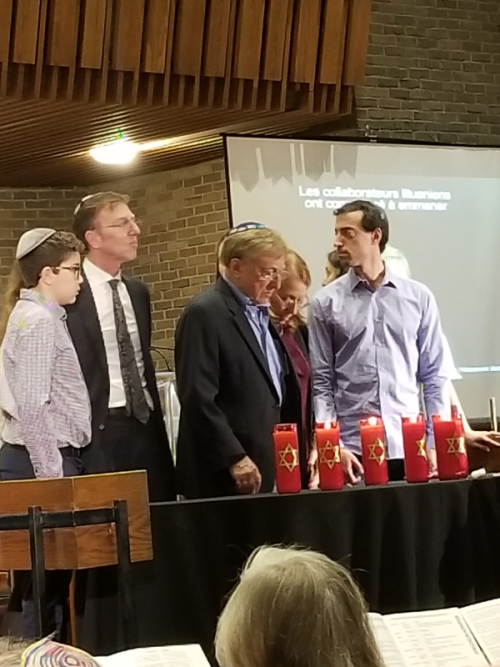 The title of this year’s ceremony, I want you to remember… A Childhood Lost , highlighted the lives of children during the Holocaust. Through video testimony, Holocaust survivors  shared their personal experiences and stories. In addition, these survivors and their descendants lit six candles representing the six million Jews murdered during the Holocaust.

The program also included the reading of poems and other short texts in English, French, Hebrew and Yiddish. Songs were performed by a choir with Grade 6 students from the Jewish People’s and Peretz Schools, accompanied by Fishel Goldig, Holocaust Survivor, and directed by Jason Rosenblatt.

Jeremy Levett, who went on the 2016 March of the Living, shared that  experience with the audience. “It is one thing to study the Shoah in a classroom and quite another thing to visit a gas chamber in the company of Holocaust survivors whose families were murdered in that very same gas chamber,” he said. “The survivors’ strength and determination to tell and retell their story and revisit the horrors they had witnessed in lands where the  history of their ancestral communities was almost erased, has allowed those who accompanied them to put many things into perspective. We are forever indebted to the survivors for their lasting memories, lessons and values they continue to instill within us. It is now our obligation to continue to pass on their memories and their message.”

Samantha Bloom, who went on the March of the Living last year, spoke about how truly  “more real”  Auschwitz and Birkenau became  when she actually set foot on the premises.

The Montreal Jewish community and its estimated 4,000 Holocaust survivors have commemorated Yom Hashoah for nearly 70 years. It was declared Holocaust Memorial Day in Quebec in 1999 and in Canada in 2005. Today, the Montreal Holocaust Museum’s Yom Hashoah Committee organizes the commemoration.

Zielinski, 83, lives in Côte Saint-Luc. He was present at the city council meeting."Approximately 35,000 Holocaust survivors ended up in Canada, with at least 9,000 in the Montreal area and many of those in Côte Saint-Luc," Mayor Mitchell Brownstein said. "I met Marcel Zielinski last year and he shared his story with me. I'm honoured he agreed to share it with us on video so that we can share it with our community and beyond."

Zielinksi was born on Krakow, Poland in September 1934. Nazi Germany invaded Poland around the time of his fifth birthday. His family was forced to live in the overcrowded Krakow Ghetto, before being sent to the Płaszow concentration camp, just south of Krakow. This camp was depicted in the movie Schindler's List.

Zielinski, who is an avid cyclist, rode across Canada in 1998 at the age of 63. At the end of June, he will be reurning to Poland for The Ride of the Living, a 90 km fundraising bike ride from the gates of the former Birkenau concentration camp to Krakow, a route that Zielinski walked at age 11 after the camp was liberated.

I also want to extend my deepest condolences at this time to CSL Director of Public Works Beatrice Newman and her family on the passing of her father  Sam Newman, a Holocaust survivor, mentor and  leader, who passed away this week. Here is a video Mayor Brownstein did with Sam and his wife two years ago.