There is a new business in  Côte Saint-Luc.

Today I dropped by one of my favorite strip malls on Westminster and Mackle Road to pick up some items at Nosherz bakery. There is also a fish market and Qualitifruits. Now you can add a first-class dry cleaner/tailor. 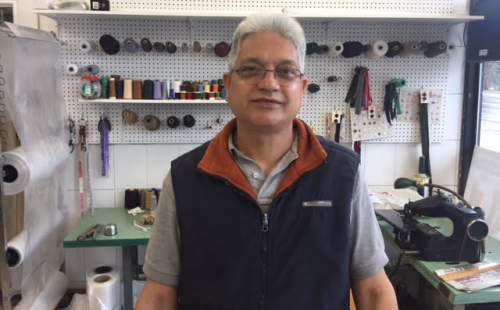 Nettoyeur Jack has only been in operation for a few weeks, but word is already catching on. Brother Jack and Singh Deol ran the same kind of business in NDG for over 30 years. They wisely saw the vacancy on Westminster and jumped on it.

Singh showed me the state of the art equipment he and his brother have purchased. There were plenty of clothes ready to be picked up. “So many people come shopping here and they have noticed us,” Singh said. “We still want to spread the word.

Jack is also the tailor and this represents a true need in our community. For decades people went to Rockland Tailor at the CSL Shopping Centre. Herman “Tibi” Selcer was the owner and what a magic touch he had with the needle. I used to love visiting Tib, even when I did not need any alterations. He was full of personality, not to mention a real charmer with the ladies. He passed away last month

When he retired, a gentleman named Constantine took over the place with his wife and has carried on Tibi’s tradition. Now there is another option, one in which you can park right next to the door.

Councillor Mitch Kujavsky said that he had a nice pair of pants sitting around the house for a year. The other day he took a walk to Nettoyeur Jack. They needed a seam fixed. "I brought the pants in and they did a very thorough examination," he said. "Four hours later I got a call that they were ready and it was a mere $7."