My visit to the new Police Station 9

For almost 20 years, Police Station 9 was located in District 2 at the corner of Cavendish Boulevard and Kildare  Road. A few months ago the station which serves Cöte Saint-Luc, Hampstead and Montreal West, relocated to the Olymbec owned strip shopping centre on Westminster Avenue best known for formerly housing The Famous Delly Boys and a Scotiabank.

While I was naturally disappointed to see them leave my district, we were all relieved  that the station remained in Côte Saint-Luc and did not simply merge with Station 11 in NDG.

Commander Jean O'Malley has retired and will soon begin a new job as director of public security for the Town of Hampstead. His successor will be named soon. Lieutenant Fred Jennings remains in place. 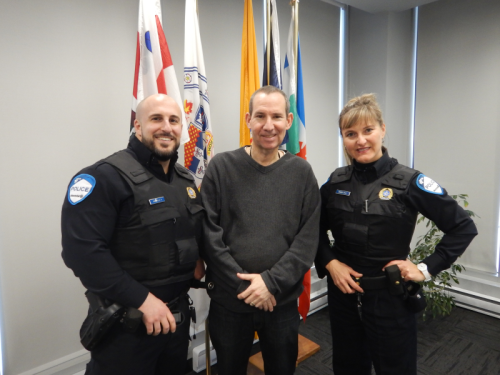 With Officers Iacovella and Nobert.

I was invited to drop by the new station by Community Officer Marie-Christine Nobert. She has been with Station 9 for 21 years, primarily in this position in which she has developed close links with municipality officials, community groups and organizations, schools and seniors. Her partner Vincent Di Angelis is on leave for the moment. Until he returns Officer Andrew Iacovella is filling the void.

"Crime prevention is our goal," Officer Nobert told me. "We want to protect the citizens."

Officers Nobert and Iacovella (and of course Di Angelis)  have spent a lot of time in schools, talking about cyber bullying and cybers safety. This summer they will visit every day camp in the territory and hold what they call Police Academy Days. Always a focus is the need to properly wear bike helmets. They will also be working with Liane Fransblow of the Trauma Department of the Montreal Children's Hospital on some programming.

Seniors, says  Officer Nobert, are always on their radar screen. "We want to look after the vulnerable and watch out for any incidents of elder abuse," she said. "We are working with the local hospitals and the CLSC to ensure no seniors fall through the cracks."

The Police Station 9 headquarters is open from 9 am to 7 pm seven days a week. Cars patrol 24/7.