In Memoriam: Constituent Esther Hockenstein was one classy lady!

The construction of two high rise  condo apartments on Marc Chagall, known as The Equinoxe, meant a very big adjustment for some residents whose windows looked out at the work site.

While I immediately established an ad hoc group of condo representatives to set some ground rules with the developers and communicate common concerns, a number of residents wanted to speak to me individually. It was about a year ago that I got my first call from Esther Hockenstein. She told me that she was taking chemotherapy, feeling quite ill and naturally the noise from the construction was very disturbing. Like I did with dozens of people, I explained to her that we could not stop the project due to existing zoning.  However, her constructive advice played a role in our negotiations with the developers to lessen the annoyances. 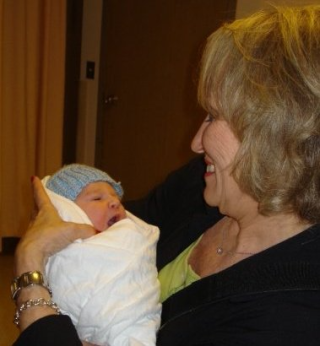 Esther with a new grandchild in 2011.

Esther and I met in person on a few occasions, e-mailed  several times a week and spoke by telephone often. Her classy demeanor was the polar opposite of one of her neighbours who from the get go was rude and disrespectful to anyone from the city. Even in her poor health, Esther tried to reason with that neighbour.

I did not know a lot about Esther or her personal backstory. Our conversations related specifically to the development. During the election campaign last fall she came to the door to talk to me. Soon after my victory, she called to congratulate me.

"My husband and I voted for you," she said. "I wanted you to know that. No matter how many times I called or e-mailed, you always responded."

Not long after that, I even got a polite e-mail from her neighbour.

"We are heartbroken to lose her so relatively young but grateful for
the miracle of her life and the impact she had on so many people," her son Jeremy wrote.

Conceived in the Lodz Ghetto, she was born Estera Griner on April 18,
1945 in a Nazi concentration camp in Zittau, Germany, three weeks before liberation. "If you stood at the end of the train tracks that August
1944 day when her mother Regina approached Dr Mengele (with her sister
Esther, who was sent to the gas chambers and after whom my mom is
named), the odds were slim we would see this day in 2018," Jeremy continued. "Indeed, if someone had offered my grandmother a choice that instead of facing the selection, she would survive, give birth to my mother, and my mother would go on to emigrate to Belgium and then Canada, live to 72, spend 57 years (50 plus married) with my father, raise three sons and have four grandchildren, including attending her granddaughter’s bat mitzvah just a few months ago, we would have all taken that dream in a heartbeat. We wish we had her for many more years but thinking back on that day we won the lottery.

"And more recently, she was diagnosed with advanced ovarian cancer, as well as breast cancer, just under seven years ago. Through access to the best medical care, she beat the odds by a lot and we had many more years together than we expected."

The Hockensteins thank Drs. Gottlieb and Lau at the Jewish General Hospital in Montreal, Dr. Matulonis at
Dana-Farber in Boston  and Dr. Oza at Princess Margaret in Toronto. "We are grateful for their care and recognize that we took more than our fair share of medical resources for our beloved mom and will do what we can to pay it forward," Jeremy continued.

"So what did she do with these years she should have never had? There will be more opportunities to share memories in the days and weeks ahead. And already many people have written beautiful notes -and a poem from our cousin in Belgium)- sharing how my mother touched them. Most of all she lived with a presence and dignity that felt like she appreciated the miracle of being alive. She was present for people, and among a family of Hockensteins, not known for being quiet speakers, she talked softly and wisely. While her closest friends might complain that she took too long to return their phone calls, it
was because there are endless stories of her paying attention to those around her. This wisdom was present in her life’s work as a social= worker where she devoted her empathy to others beyond her friends and family."

Jeremy added that  long before the mantra, “think globally, act locally,” his mother focused on her local environment: creating a physical and emotional home for her family. "She knew what she could control and what we she couldn’t," he said. "She put a lot of energy into our home - for our family and for guests. Through her attention to food, and to gardening, among others, she created a space that allowed those of us fortunate to spend time in it, to develop the grounding and confidence to go out into the world. I have traveled my share over the years but ever since the day I left home at 19 for college, I have felt in mind
that my center of gravity was around my mom and our home.

"So what a journey she had: literally being born at the very bottom of civilization, in a concentration camp, with no safety and security to the very top. My kids are tired of my referring to the seven billion people on our planet to give us all some perspective on our privilege. But goodness my mom rose from the very bottom to the very top in terms of economics, and security and community. It’s hard to ask for much more. She gave my son Natan some simple advice this week when he visited her: 'Be nice, be honest and pursue your dreams.' The foundation my mom gave us was a gift to allow us to live a life of kindness, integrity and dedication to making the world a better place."

I will miss our talks. My deepest sympathy goes out to her husband Michael and other family members. She was one classy lady!