When my fellow Côte Saint-Luc city councillor Oren Sebag and I found out that Eli Beer, the much revered founder of United Hatzalah of Israel was speaking at the Shaare Zion Congregation  (www.shaarezion.org) we made it our business to be there.

Using specially equipped motorcycle ambulances, United Hatzalah’s network of more than 4,000 volunteer medics help save thousands of lives each year across Israel by providing medical treatment in an average response time of three minutes or less.

I thank local supporter Marvin Binbom  and am Regional Development Officer for Canada Andrea Preciado for providing me the advance information which prompted us to attend this most interesting breakfast meeting. 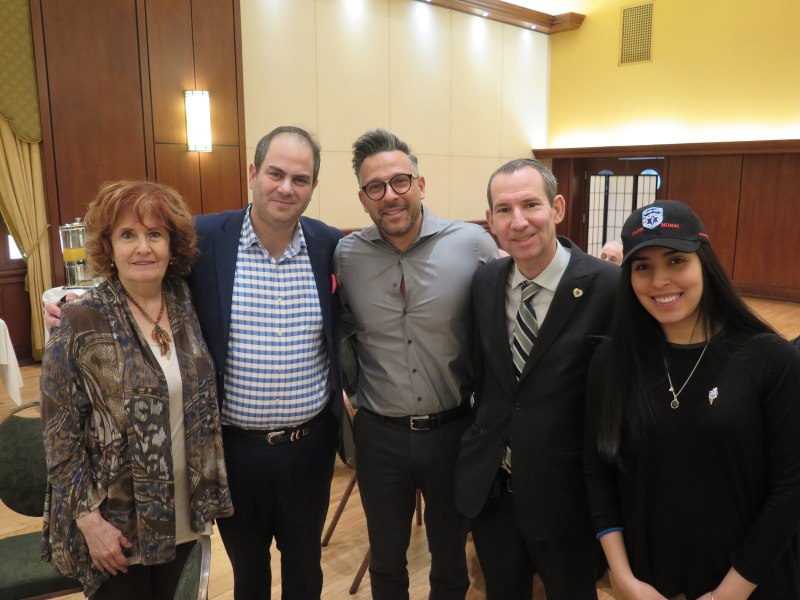 First off, United Hatzalah of Israel should not be confused with  Hatzoloh Montreal,  another Jewish first response organization.

Working as a volunteer Emergency Medical Technician (EMT) from the age of 17, Beer saw just how rare it was that an ambulance team was able to navigate the congested streets of Israel to reach an accident victim in time to save his/her life. He also observed that local people, if trained appropriately, could fill the gap in care left between the first call to emergency services and the arrival of the support team—and save lives. His organization has approached this problem through the novel use of technology and an ever-expanding volunteer corps that pulls from all communities throughout Israel. His teams are now able to respond to any incident, regardless of location, in under three minutes.  Organizing  a volunteer unit of EMTs,  using specially equipped motorcycle ambulances to manoeuver efficiently in urgent-care situations, proved to be a stroke of genius.

One day Beer's team saved the life of his own father.

Councillor Sebag, who is a Registered Nurse by education and oversees the Public Safety portfolio in Côte Saint-Luc, was very intrigued by what he heard. Both of us plan to bring this information to the council table. After the talk he gave Beer an overview of how our Emergency Medical Services works and invited him to come see it for himself on a future visit.

“When I was young I said I wanted to be a doctor,” Beer said. “My dream was to save a life.”

Annually, United Hatzalah responds to more than 800 emergency calls each day, of which approximately 25 percent are critical lifesaving situations. They also do not charge for their services, unlike others.

Through his fleet of ambucycles, several thousand volunteers and training programs, Beer has accelerated response time to within minutes, while additionally bringing Muslim, Jewish, and Christian communities together to solve this common yet crucial issue.

United Hatzalah trains volunteers and then equips them with, among other items, a GPS application for their mobile phone. When an emergency medical situation arises, volunteers within a specific radius are notified and expected to immediately attend the situation. They then provide first response action within three minutes to stabilize the victim until professional help arrives to transport them to a hospital or more secure location.

While his organization was originally based in the Jewish community, the universal need for these services quickly became apparent. The program was promptly scaled to include Arabs and Christians in the volunteer corps. Today, United Hatzalah members respond to any and all accidents, regardless of ethnic origin or religion.

Beer said he would like to grow his organization in two main directions:  an  Israeli operation of  3,000 volunteers and 500 ambucycles and to replicate the model in other countries—transferring the experience accumulated throughout the last two decades to new communities in need and adjusting the how-tos for new contexts.  Could our EMS use this technology?

Beer joked: “For Montreal, maybe you need an ambucycle snowboard!”

I met Sandy Lipkus. She and her husband Ted Adler heard about Beer’s organization and became supporters of  United Hatzalah. They have visited the command center in Israel and have sponsored two ambucycles and one car via their Foundation, as well as a team of 10 ambulance drivers.  She noted how impressed she was how donors are told regularly exactly how the vehicles they sponsored are used to save lives. “That is very concrete,” she agreed.

Neil Bernstein concluded the event by thanking everyone for coming.

To find out more go to https://israelrescue.org and watch this video of Eli Beer.

"The program was promptly scaled to include Arabs and Christians in the volunteer corps."

I think you mean to say "Muslims and Christians"? Because while most Arabs are Muslim, some are Christian.