As the city councillor responsible for Animal Protection, I have worked closely with many pet owners over the last number of years. I am particularly proud to have founded the Côte Saint-Luc Cats Committee eight years ago. Thanks to our original leader Shelley Schecter and now Diane Liebling, a small group of volunteers are doing fantastic work. The time has indeed come for a Côte Saint-Luc Dog Owners Committee to be formally established. 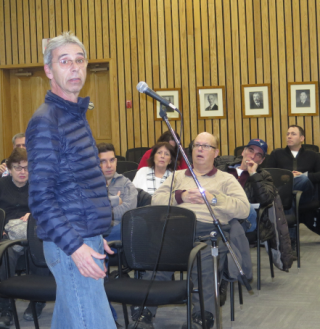 Two years ago, with the help of people like Abe Haim and Jason Balinsky, we created a Côte Saint-Luc Dog Run Advisory Committee. Abe chiefly served as my main liaison and as a result of his good work a number of improvements have been made to the Mackle Road facility. A second dog run on Côte Saint-Luc Road, between Richard Schwartz Park and Meadowbrook Golf Course, is near completion.

During the last election campaign many candidates, including myself, heard from people who agreed that a full-fledged Dog Owners Committee would be welcomed. On Monday evening, January 8 at City Hall, I co-hosted the first Dog Owners Forum with Councillors Oren Sebag, Mitchell Kujavsky (both dog owners) and Steven Erdelyi (whose perseverance brought us the newest dog run).  Jordy Reichson, our Director of Public Safety, was a special guest speaker. It his department that applies the bylaws related to dogs. Diane Liebling joined us as well to explain the process behind forming such a committee.

With poor weather conditions and a nasty flu making the rounds, we were pleased to have some 30 people on hand. Joel Goldenberg was there from The Suburban Newspaper, so our message will get out to a larger audience. 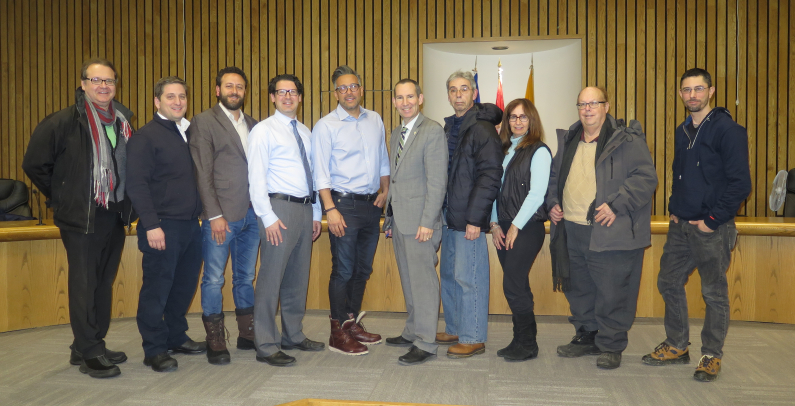 There is indeed a movement among dog owners to walk their pets in public parks.  Our bylaws state that all dogs must be kept on a leash throughout the year when in a public place.  Until just over a year ago, dogs were not allowed in any public parks and playgrounds. We agreed to a pilot project in some smaller parks: Aaron Hart Park along David Lewis St; Harold Greenspoon Park on Borden Ave.; the green space between Marc Chagall Ave. and the parking lot of the Bernard Lang Civic Centre; the green space on Baily Rd. between Northluc and Cavendish; the green space on Baily Rd. between Lyndale and Glencrest; and a section of Kirwan Park between Blossom and Wentworth. It worked out very well and I did not get one single complaint. If we have responsible dog owners who pick up after their canines and keep them on leashes, then this can work.

There are several municipalities on the island that allow dogs in parks, notably Westmount. Based on the feedback from our meeting, I will bring some proposed amendments to our council with the support of Councillors Sebag, Kujavsky and Erdelyi.

As Director Reichson noted, our proposal could include dogs permitted in parks on a leash, but not in the areas of playgrounds or splash pads. We would have to make sure there is a sufficient   buffer zone.  Tamar Hertz asked if we might consider designating one park where no dogs would be allowed at all. Director Reichson pointed out that it might make more sense to cordon off an area in a large park to achieve this same purpose. It was also pointed out that additional signage will be required in our parks.

Essie Amiga asked if we could allow dogs to run free on fields that are empty in the winter or during the day at certain times of the year.

CLEANING UP AFTER YOUR DOG

Most dog owners are responsible, carry plastic bags when walking their dogs and throw the waste in a garbage can (Councillor Erdelyi noted that dog poop is compostable). It was suggested that perhaps our dog bylaw should include a fine for someone not carrying a bag.  What a great idea and something we will bring to council.

Abe Haim spoke about the work he has done with the main dog run. Besides being an excellent contact for me, he has regularly surveyed dog owners. As a result we now have a fence separating small and large dogs and some brand new lighting. Councillor Erdelyi then spoke about the new dog run, which is 95 percent complete. He credited Rona Raie for persistently pushing for such a facility on that side of town. This dog run will include water fountains for humans and canines. It is smaller than the one on Mackle Road. As a result there is no space for a dividing fence.  This Dog Run also doubles as a nature path. People are being asked not to park their cars immediately next to the area as it is a narrow road.

Nancy Sculnick, who was unable to attend the meeting, suggested that someone open up a commercial indoor dog park like this one.  Mackle Road resident Steve Stein is already exploring the idea.

A number of people asked if the city can install more garbage cans. Councillor Erdelyi noted that we purchased 120 new specialized cans with dual bins for garbage and recyclable material. About 50 more are on the way and naturally we want to have them properly located so dog owners can use them.

We need to educate people about dogs. “Kid for instance,” said Councillor Kujavsky, “need to be taught how to properly approach dogs.”

Abe Haim believes dog owners should have to take courses on how to properly look after their pets.

Someone else suggested that license renewal takes place, each dog owner should be presented with a list of responsibilities – as well as a plastic bag!

FORMATION OF A COMMITTEE

It was encouraging to see that each person who attended the meeting expressed an interest in serving on a committee.  We will no doubt get many more names in the weeks and months ahead. My hope is to see them get organized like the Cats Committee and create sub-committees to focus on the dog runs, education, social media and feedback to me as their direct contact on council. We also want to hear the voices of non-dog owners and be respectful of their concerns. We have rules in our city dealing with wild and vicious dogs and people should always call Public Security if they run into a situation like that. You can read our bylaws here.

Thank you for the feedback. It is much appreciated.
Once again, I have only one request which is that the gate to the Mackle dogrun, open towards the street. It is beneficial in two ways.
a) Snow removal and ability to enter the park. Currently the triangle area between the three gates gets hard packed, making the gates hard to close or open.
b) On exiting the park, some owners mentioned that they got clipped on the heel by the sidewalk side gate. They complained about the spring

I will CC Abe Haim

Leslie we are now on the "SNOW REMOVAL" list. When the gates were first installed there was no problem, now that there is a lot of snow it is more difficult. As soon as the city clears all the ice and snow down to the pavement there will be no problem. As long as the keep it clear all will be well.