On the eve of Chanukah, which starts on Tuesday night December 12, the public is encouraged to attend some high profile Menorah lightings.

At 6 pm Tuesday night, Beth Chabad CSL will proceed with its  annual lighting of a giant Menorah in front of City Hall. Mayor Mitchell Brownstein and member of city council will be on hand as Rabbi Mendel Raskin presides. In past years Councillor Steven Erdelyi has climbed aboard a cherry picker and been lifted quite high in illuminate the shamash and the first candle. Following the ceremony, the traditional car top menorah parade will take place through the streets of our city. There will also be smoked wraps and wine from the Deli Boyz at Quartier Cavendish, hot Moroccan donuts, prizes for the kids, cotton candy and a raffle offering winners the chance to fly over Montreal and to enjoy a flight simulator experience.

On Wednesday, some of our elected officials and residents will head to Ottawa for Chanukah on the Hill. Jewish Parliamentarians Anthony Housefather and Michael Levitt will once again host this large celebration, with special guest Prime Minister Justin Trudeau taking part for the third successive year. 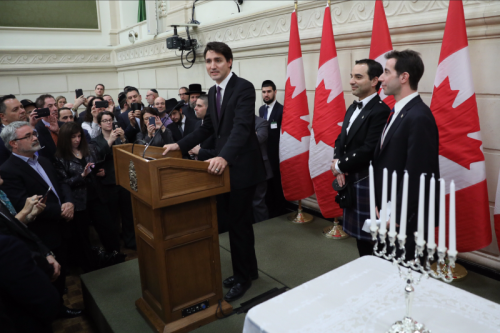 Here at home, Tifereth Beth David Jerusalem Congregation (6519 Baily Road) in Côte Saint-Luc is inviting the community to a historical menorah lighting ceremony on the second night of Chanukah, Wednesday, December 13 (5:15 pm).  On this night a special Chanukah Menorah made from the metal in rockets that were fired into Israel from Gaza,  generously donated  to TBDJ by Jeff  and Adria Mandel, will proudly be showcased to the community.

This Nine Branch Traditional Style Menorah turns terror into beauty in a very literal sense! “Light this Menorah on Chanukah, we are told and display it in our shul throughout the year as a symbol of peace and light,” stated Rabbi Yechezkel Freundlich. “TBDJ is very fortunate to have one of only 50 such pieces that were manufactured.” 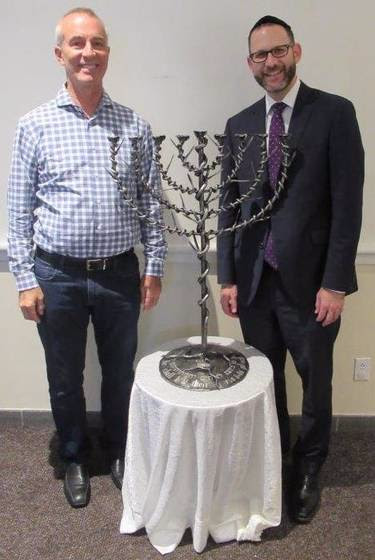 The menorah was  fashioned by metal sculptor Yaron Bob  from actual rockets that landed in Israel. Each piece is a one-of-a-kind, hand-made, limited edition collector's item. They are true pieces of history - living proof that Israel has endured thousands of missile attacks for so long. The artist has literally transformed instruments of death, weapons of war, into objects of great beauty and meaning, representing love, growth, and great hope for a peaceful future. He has created modern day versions of “swords beaten into plowshares.”

Some of the proceeds from each purchase have been directed to protect the people of Israel from future rocket attacks via the construction  of above-ground, portable bomb shelters in southern Israel.

Jeff  Mandel has been a member of TBDJ for more than 40 years. “TBDJ did not have a proper menorah for Chanukah and when I came across this one there seemed to be a beautiful message in taking the remnants of weapons and turning it into something beautiful that can be used to fulfill a mitzvah,” he said.”