Home Categories Posts by email Search
A new café opens at the Quartier Cavendish: let's all support it!
The "power" of the cats: 2017 benefit concert a big success

As Phase Two of the City Hall/Library Parking Lot project is under way, we have been getting questions regarding the pedestrian access to the building.

For this week, pedestrians are being directed to the temporary stone path that runs from Sir Walter Scott to Cavendish, on the south side of the parking lot.  The contractor will be bringing more signs to direct the pedestrians from the back of the lot towards this path.  He has also adjusted the temporary fence and its supports following a complaint received about a possible tripping hazard risk.
Weather permitting, we expect that Phase Two of the parking lot should be paved by September 1.  This will provide parking in the area that is presently under construction and the sidewalk for pedestrian access towards the back entrance.  The contractor has been advised that this sidewalk closer to the building is a priority and he is working to see if it can be done sooner than later.
The entire project should be completed by October. 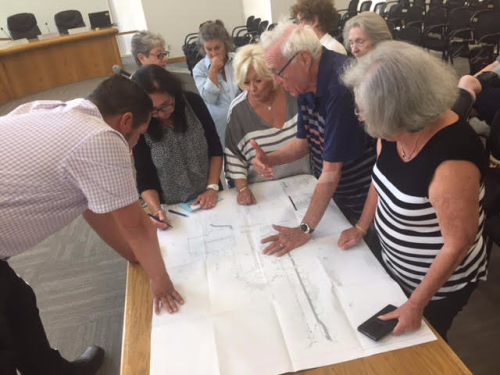 Residents take part in a meeting about the parking lot construction.
Last week we invited area residents to City Hall to get a closer look at exactly what this project will look like upon its completion. I met with a number of residents from Marc Chagall and Sir Walter Scott. There was a request for us to save even more trees than originally planned. We have done so and as a result there will be eight less new parking spots than originally envisioned.