As part of the Federation CJA 100 Year Celebration, in association with the Côte Saint-Luc Public Library and the Côte Saint-Luc Historical Society – the public is invited to explore the historic role of Jewish immigrants to Canada who became independent farmers and community builders throughout the province of Quebec.

The history of Jewish farmers in Canada stretches all the way back to the 1880’s – from the Maritimes to British Columbia. Although some scholars allude to the proliferation of Jewish immigrants as farmers mainly in the Canadian west, it is very clear that their presence throughout the country did have an equally significant historic impact to the overall Jewish community. From places in Quebec like La Macaza (Mt. Tremblant), Ste Agathe, Ste Sophie / New Glasgow, Laval, Côte Saint-Luc and the Eastern Townships, the involvement of Jewish immigrants within Canada’s early agriculture industry was extensive and significant. Whether it was in the tobacco industry, grain production, vegetable cultivation, raising livestock, poultry, eggs or in the dairy industry – Jewish farmers were creative, industrious and innovators in a profession that was constantly evolving.

Throughout month of July 2017, the public is invited to explore the life and times of these Jewish farmers who settled in parts of Quebec from as far back as the late 1890’s. The exhibition will be on display at the Eleanor London CSL Public Library (5851 Cavendish) beginning July 2, 2017 – with special days that will include presentations and guests speakers. Please log on to www.csllibrary.org for additional information, directions and opening hours. 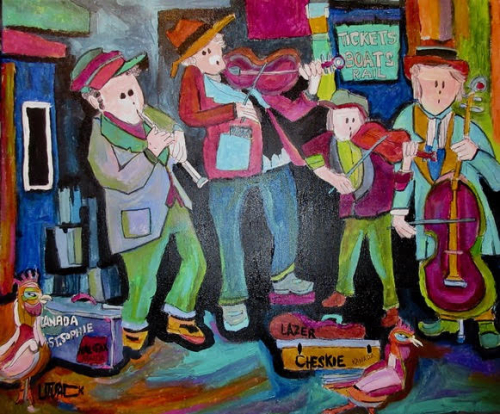 The exhibition (in French and English) titled Jewish Farmers of Quebec: A 100 Year Retrospective will focus and detail the important historical dimension of Jewish farmers throughout the Province of Quebec. Whether living in organized communities or as independent entrepreneurs, the choice to begin a new life as a farmer in Canada was a hopeful option.
From the many places they settled and businesses created, this exhibition will highlight the people and their contributions throughout Quebec. By means of personal histories, statistical data, photographs, including a special series of paintings (two shown in this blog) contributed by CSL artist and District 2 resident Michael Litvack, this event will be a rare opportunity to learn, and appreciate the history of Jewish farmers that settled in Quebec post 1890.

The exhibition will conclude on July 30. The public is invited to visit the exhibition during the opening hours of the library. On Sundays Dr. Howard Gontovnick will be present on site for questions and discussions. Developed exclusively by Dr.  Gontovnick for the Federation CJA’s 100 year Celebration, in cooperation with the CSL Historical Society and the CSL Public Library, this unique exhibition becomes an important footnote to the contributions of the Jewish immigrants as farmers in Quebec. Dr. Gontovnick, who is a psychotherapist and Adjunct Professor at the State University of New York in Plattsburgh, New York in World Religions and Jewish Studies – is a researcher and has a background in agriculture. He has written many articles and book chapters focusing on understanding and the role of Jewish farmers both in Quebec and Canada. For more information, please consult the website www.jewishfarmers.ca. After arriving in Canada during the 1920’s, the Gontovnick family later settle in Ste Sophie, Quebec in the early 1940’s. Shortly after a chicken farm was established and gradually became one of the largest egg processing stations for Greater Montreal and surrounding regions. Today, the farm is semi-active producing potatoes, corn and other grains. For more Information - Dr. Howard Gontovnick ( howardg@alumni.concordia.ca )