As the city councillor in Côte Saint-Luc  responsible for Library and Culture I take great pride in everything this iconic institution provides.

I always like to say that we are a lot more than just loaning books. Programming makes up a good portion of our agenda. A case in point was our June 28 Local Author Salon at the Harold Greenspon Auditorium. 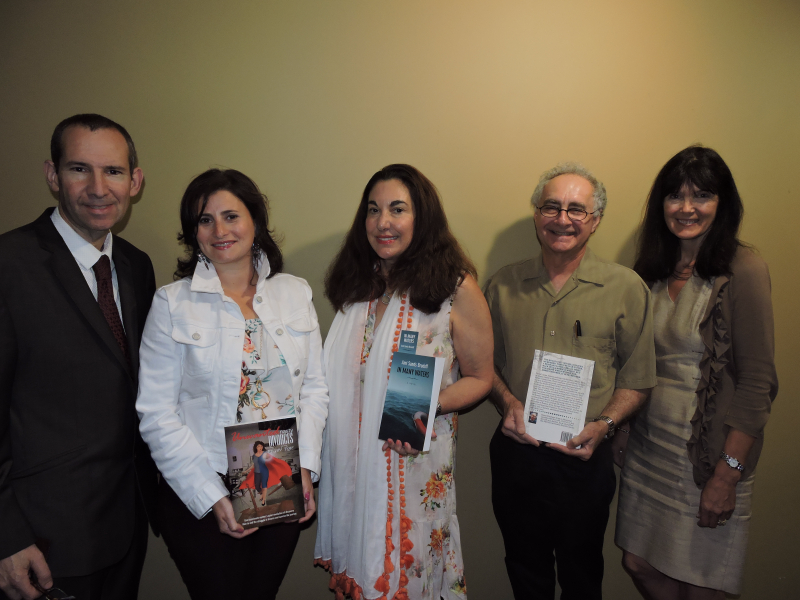 Prior to the program I met with (left to right) authors Ravit Rose, Amy Sands Brodoff, Harry Rajchgot and Librarian Janine West.

Ami Sands Brodoff (In Many Waters), Harry Rajchgot (Gravitational Fields: A Novel of Peacetime & War) and Ravit Rose (Unwanted Nasty Divorces) shared from their latest works. This was an opportunity for our audience to get inspired and learn first-hand what it takes to write a novel, have it published and be ready to share it with the whole world.  The eye-opening experience featured three distinct writing styles and paths to discovery, self-help and the art storytelling.

Ami resides with her family in NDG.   Ami Sands Brodoff is the award-winning author of  three novels and a volume of stories. The White Space Between centres on a mother and daughter grappling with the impact of the Holocaust and won The Canadian Jewish Book Award for Fiction. Bloodknots, a volume of thematically linked stories about families on the edge, was a finalist for The Re-Lit Award. Her debut novel, Can You See Me? penetrates into both the point of view of a young man with schizophrenia and his sister who struggles to help him. The novel was nominated for The Pushcart Prize and is a recommended book of NAMI (The National Alliance for the Mentally Ill). A native New Yorker, Ami now makes her home in Montreal with her husband, children, and Brittany Spaniel. She recently completed her fourth book, the novel In Many Waters.

Harry, who is a neighbour of mine in District 2, was born in a displaced persons’ camp in Pocking, in what was then West Germany, after the end of World War II. He is the son of Holocaust survivors who spent the war years in the Soviet Union after escaping from Poland in 1939, soon after the war began.  In his day job as a dentist, he is a staff member of the McGill University Health Centre, and a faculty lecturer at McGill University. Gravitational Fields is his first novel. Formerly co-editor of the Harvest-HaAsif Literary Anthology, he is currently editor of JONAHmagazine, an online literary magazine. He amuses himself by writing musical plays for the Jewish festival of Purim, and is a founding member of the Greene Writers Collective.  He spent more than 20 years writing  Gravitational Fields, having started  at the time his father became severely ill in 1994. It gives a fictional account of a family of Holocaust survivors struggling to overcome their past, based on the stories of many individuals and families who went through similar experiences. The novel is historical fiction, a family epic that begins just before the German invasion of Poland in 1939, the event which resulted in the start of World War II. It is a fantastic read.

Ravit Rose is a deeply devoted mom to her two young sons and a former  Côte Saint-Luc resident. This is where her passion lives and breathes. Pre-divorce, she envisioned a successful career building her business dreams and actively making a contribution to her community. Her confidence and trailblazing spirit is evident in her keen work ethic and entrepreneurial acumen. She earned her Bachelor of Commerce degree specializing in Marketing and Entrepreneurship & Small Business Management along with a Human Resources Certificate. She continued to pursue her career path from the very first day of her separation despite the fact that it was often thwarted. She found the emotional impact her divorce was having on her and her children to be heartbreaking. She was also very much aware that her ex-husband was having a hard time. Often, she felt that she didn’t understand why and how matters seemed to go wrong all the time. So she went off on an adventure to find the solutions she needed to end her struggle. This took her to discoveries she had not expected- to common issues that affect parents around the world, regardless of the varied laws in their respective justice system. Her book speaks of the Quebec Justice System as a means of comparison for her readers around the world. With the help of hundreds of other divorced parents’ stories (majority of which were mothers), Ravit proudly authored her book, Unwanted Nasty Divorces, hoping everyone’s voice will encourage a chorus of others to engage in a much-needed dialogue in support of families everywhere. More importantly, she intends to ignite conversations about needless suffering families face because of inconsistencies in the family justice system and how these flaws are failing families far and wide to make way for monumental change.

This evening represented a great opportunity to encourage local talent.  Copies of their books were available for purchase at the event.

For more information about what’s on this summer at the Library, visit csllibrary.org or call 514-485-6900.

I hope the authors donated copies of their books to the library.