VE Day 2017 was a pedagogical affair

For many years the annual Victory in Europe (V-E) Day commemoration took place on a Sunday. In attendance were veterans from the Brigadier Frederick Kisch Branch 97 of the Royal Canadian Legion, dignitaries and members of the community. The crowds were never exceptionally large and what we clearly missed was the younger generation. 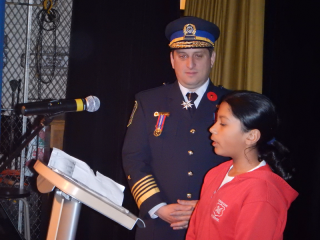 A Merton student reads "In Flander's Field" as Jordy Reichson looks on.

When fellow Councillor Sidney Benizri and I were appointed co-chairs of this year’s VE Day event, we were committed to making it an educational exercise. So we scheduled it for a Monday morning (May 8) at a centrally located school – the Marymount Adult Education Centre  on Parkhaven Avenue. Principal Jacques Monfette was most gracious in making all of the arrangements. We virtually filled the 350 seat Syd Wise Auditorium with students from the two host schools – Marymount Adult Education Centre and John Grant High School; Merton and Willingdon Elementary Schools; and Solomon Schechter Academy.

The ceremony highlighted the 72nd anniversary of the liberation of Europe from the armed forces of Nazi Germany, on May 8, 1945. Our Public Safety Director Jordy Reichson coordinated much of the ceremony and served as a superb master of ceremonies. He put VE Day into perspective, provided some historical notes and showed this  excellent video. 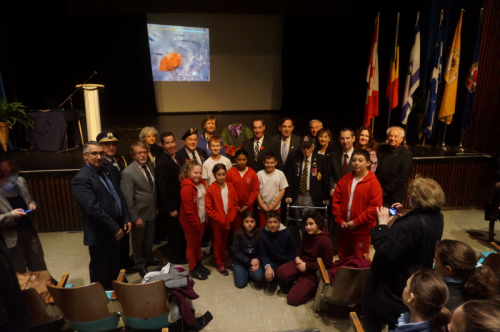 A group photo of dignitaries and the Merton students.

We were fortunate to have with us veteran Sonny Rubin, 92 years young.

“Seventy-two years ago very young men went to war,” said Mayor Brownstein. “You had to be 18 years of age. Some 15, 16 and 17 year olds got fake IDs so they could get into the armed forces. They did this to insure our freedom.” 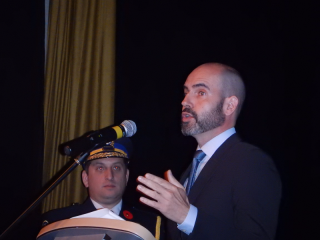 Housefather pointed out that this year’s commemoration of VE Day coincides with the 35th anniversary of the Canadian Charter of Rights and Freedoms. “No matter who is in power,” he said, “you have rights.”

Regarding VE Day, Housefather noted that when he was our mayor VE Day was coordinated by the veterans. “We had dozens of veterans in their 70s who had fought and come back and created Côte Saint-Luc,” he recalled. “They could have come back jaded or disgruntled. But they came back and built our community.”

The Consul General told the audience that his father was a survivor of the Holocaust whose family hid in a little underground shelter and was liberated by the Soviets. “I would not be here had it not been for the Allies,” he said.

Raising the elections in France, the Consul General expressed deep concern over the fact that Marine Le Pen, a candidate whose party denies the Holocaust, got 11 million votes. “We have a very important role to remedy that so denial and revisionism does not happen again,” he said.

Thanks to staffer Jordy Reichson, Regine Banon, Cornelia Ziga and Laura Trihas for coordinating the event. We will next convene to honour our veterans on Friday, November 10 (11 am) for our Remembrance Day commemoration at Veteran’s Park next to City Hall.

“Côte Saint-Luc is proud to express gratitude to the men and women who have fought to liberate Europe,” said Mayor Brownstein. “Our veterans contributed in ending the genocide against the Jewish population of Europe and others targeted by the Nazis. Attending this ceremony is a concrete and visible manner to honour them and to reflect on the sacrifices made.”