DISTRICT 2: FIRST EVER TOWN HALL MEETING ON THE CAVENDISH EXTENSION SET FOR JUNE 5

A Côte Saint-Luc District 2 Town Hall meeting will take place on Monday, June 5 (7:30 p.m.) at City Hall (5801 Cavendish Boulevard). For the first time ever, the topic of the extension of Cavendish Boulevard will be discussed in this format.

I created the District meeting concept when I was first elected in the fall of 2005 as a way to maintain closer relations with constituents and talk mainly about issues related to the surrounding neighbourhood. Since then two other councillors have followed suit. The special guest speaker will be noted traffic expert Rick Leckner, who has been pushing for the Cavendish extension back to his days as the helicopter traffic reporter for CJAD form 1969 to 2000. While he established a very successful corporate communications firm, Maison Brison, in 1983 he continues to be sought out by media for his insights into traffic coordination. In 2011 he was named to Transport Québec’s comité technique sur la mobilité des biens et des personnes, and has continued to work with officials in an attempt to mitigate traffic congestion. Mayor Mitchell Brownstein will provide an update on the Cavendish extension, which is more of a reality now than ever before with all three levels of government behind the project. Elisabeth Prass, from the office of D'Arcy McGee Liberal MNA David Birnbaum, will do the same.

“In politics, nothing is ever a sure thing, but this looks very promising,” said Mayor Brownstein. “We have active support from Mayor Denis Coderre in Montreal including the project being listed in the three-year capital expenditures budget and reserves being placed on plots of land needed for the eventual extension as well as $222,000 being presently spent by the agglomeration of Montreal for the studies on the overpass/underpass route..

“We also have local MNA David Birnbaum and MP Anthony Housefather working behind the scenes in Quebec City and Ottawa to secure the necessary funding, mayors from neighbouring communities all in support, and buy-in from Canadian Pacific, and Canadian National who own the land through which the road extension must pass.”

Lt. Frederick Jennings from Police Station 9 will be on hand to respond to inquiries related to public safety in the community. Also to be discussed that evening will be the new traffic light configuration at Cavendish and Kildare, the new Elie Wiesel Park, construction on Marc Chagall Avenue, the resurfacing of the City Hall/Library parking lot and other items of interest. 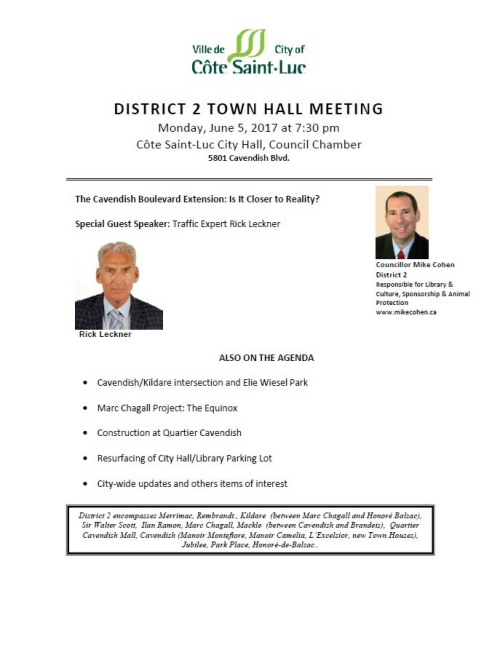 I really look forward to this town hall meeting.
It's been one of the projects that needs attention.

The other project is to fill in the Decarie Expressway, which should follow the Cavendish extension.

It is about time that this project becomes a reality