Weekend work has resumed for the time being on Marc Chagall Avenue for the first phase of two 12 storey apartment buildings to be known as the Equinox. As noted many times, this land has been zoned for a highrise for 29 years.

City council will hold a special meeting on Monday evening, May 29, to adopt amendments to our noise bylaw and establish new hours of work for construction. Since both the city and the developers wish to avoid a legal fight in court, negotiations have been taking place over the last several weeks in order to arrive at a compromise. 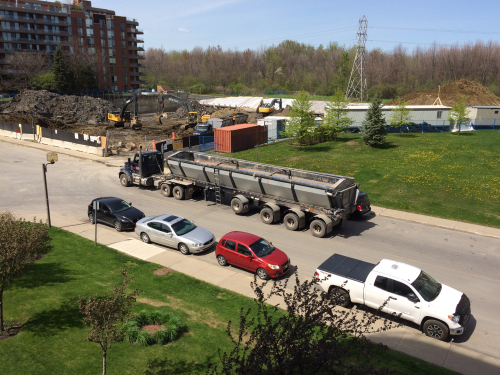 More than a month ago, when I learned that the developers intended on working weekends and weeknights, I established a committee with representatives from the five condominium associations directly affected by this work: Rothchild I and II, the Marquise, the Bellagio and Les Cours Marc Chagall. Last week we met with the developers and while the official compromise must still be finalized by legal counsel, their plan appeared to be acceptable to everyone in the room.

In an ideal world, there would only be construction weekdays until 5 pm and not on weekends at all. The developers are on a tight schedule as they wish to have their first building ready for occupancy on July 1, 2018 to correspond with the most standard leases. They have agree to slow down their work considerably and only have some units available at this time as the message I have received loud and clear, particularly from the two Rothchild buildings,is that they do not wish to hear construction noise seven days a week. There are others, I must tell you, who would like to see this work finished as soon as possible irregardless of how many days they work.

The developers will need to work weekends through at least June 15, after which point the schedule will slow down and they will only need 50 percent of the Saturdays. On issues of safety, street cleaning, parking  and other types of noise disturbances,  discussions are moving along nicely,

I will continue to provide updates, with certainly much more to say after May 29.