As a city councillor in Côte Saint-Luc, I always appreciate opportunities to work together with other elected officials in neighbouring municipalities. Such was the case on March 21 when the borough of Côte des Neiges-NDG spearheaded an energizing public meeting at their Community Centre to protest the senseless decision arrived by the Quebec Electoral Representation Commission. This unelected body, which answers to absolutely nobody, inexplicably reversed its February 7, 2017 second report on the electoral map that proposed to maintain the Mont Royal, Outremont and D'Arcy McGee ridings without any change. When the next provincial election takes place in October 2018, Mont Royal and Outremont will be merged and D’Arcy McGee unnecessarily larger in size. 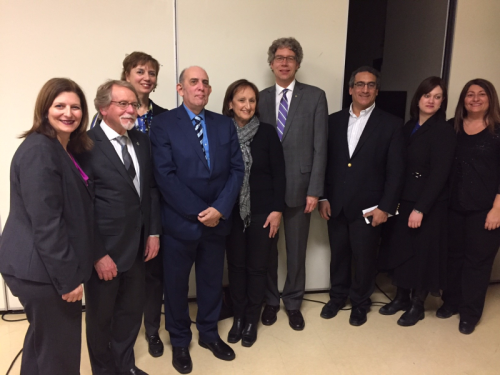 Dida Berku and Ruth Kovac join other political leaders at the event.

Snowdon Councillor Marvin Rotrand and Suburban Newspaper editor Beryl Wajsman led the charge, first with a press conference and then with this impressive public meeting. Rotrand was joined at the head table by Borough Mayor Russell Copeman, Hampstead Mayor William Steinberg, TMR Councillor Erin Kennedy (representing Mayor Philippe Roy), CSL Councillor Ruth Kovac (representing Mayor Mitchell Brownstein) and Outremont Councillor Mindy Pollak (representing Mayor Marie Cinq Mars) English Montreal School Board Chairman Angela Mancini spoke, with Vice Chair Sylvia Lo Bianco, Commissioner Julien Feldman and Parent Commissioner Joanne Charron in attendance. Allan J. Levine, Dida Berku and I were the other CSL councillors on hand. I saw several of my constituents. If the Electoral Map had been adopted by Members of the National Assembly, I am certain that the passion and clear facts set out at this meeting would have resulted in an about face. Regrettably, there is nothing elected officials seem to be able to do. In fact, Mont Royal and Outremont are represented by cabinet ministers Pierre Arcand and Helene David. One of them will have to find a new place to run or retire.

I spoke to lawyer Peter Villani after the meeting and we both agreed that the Electoral Representation Commission still has an opportunity to correct this terrible wrong, admit it made a mistake and allow the status quo to prevail. It was standing room only at the event.

The room was packed, something which elated fireball Rotrand. “The large attendance we witnessed speaks to the public interest in opposing the loss of representation that our communities will suffer if the map decreed by the Electoral Representation Commission stands,” he said. “The meeting essentially came together in a very short time so I believe the turnout reflects a broad consensus in our part of the island.”

Now unless the Commission shows some class, this decision will have to be fought in court and initiated by citizens. Ideally, an injunction can be sought. Wajsman has taken the lead by collecting funds for an eventual contestation and former NDG-Lachine Liberal Member of Parliament Marlene Jennings stepped forward to set up a blue ribbon panel. Jennings was chosen by the Quebec English School Boards Association to do the same when the provincial government tried to push through Bill 86 – aimed at abolishing elected school commissioners. The government backed off and they did so because they answer to the public; the Electoral Representation Commission simply marches to the beat of its own drum.


Each of the boroughs and municipal councils in the area has or will soon adopt a motion in opposition to the electoral map. All feel that the Commission's map will mean a serious loss of representation for their citizens, lacks respect for natural communities and does not provide the effective representation that the electoral law indicates must be the basis of any final decision.

The mayors have shared a legal decision written last September by Jean-François Gaudreault-DesBiens, Dean of the University of Montreal Law School, which indicated that the Commission's proposal of 2015 to merge Mont Royal and Outremont and change D'Arcy McGee was highly questionable. As the Commission's final decision has reverted to the 2015 plan, the mayors feel the Commission’s proposal will not stand up to a legal challenge.

“We are strongly concerned about the diminished political weight of the island of Montreal,” said Copeman, a former Liberal MNA for NDG. “Our political weight has been reduced in every riding redistribution since 1992 which merged Westmount and Saint-Louis. We have lost four ridings over the decades.
"The merger of Mont-Royal and Outremont creates a very large riding which is expected to see robust demographic growth over the next five years which we anticipate will take it over the legal maximum number of voters allowed by the electoral law."

The Commission proposes to maintain 125 electoral ridings in the National Assembly with the average number of voters being 48,952 per riding. The electoral law allows ridings to be as much as 25 percent more or less than the average, a maximum of 61,190 or a minimum of 36,714 voters. This legal disparity of up to 24,476 voters or up to a 69 percent legal difference of voters per riding gives some voters in Quebec far more power than others.

While the mayors believe such a disparity in number of voters per riding should only be allowed in the rarest cases, there are many examples in the map of small ridings in the 37,000 to 40,000 range while many others approach the upper limits. Ridings like Duplessis, Dubuc, Rousseau, Megantic and Nicolet-Betancour all have far fewer voters than Montreal ridings such as Nelligan, Saint Laurent, Robert Baldwin or the new D’Arcy McGee or merged Mont Royal - Outremont which have between 55,000 and 59,000 voters each.

"Worse of all is that the Commission proposes six ridings that are exceptions to the law beyond the Iles de la Madeleine, the only exception the law actually permits,” says Mayor Brownstein. “These ridings including Abitibi-Est, Abitibi Ouest, Bonaventure, Gaspe, René Levesque and Ungava have between 26.8 and 44 percent fewer voters than the electoral map average and are below the legal minimum of voters. How do we explain to voters that D'Arcy McGee will now have boundaries that will no longer resemble its historic territory and have 56,245 voters while Gaspe, a riding that will have fewer voters in 2018 than at the 2014 elections, will have a Member of the National Assembly with only 30,048 electors?"

The mayors note that the new map cuts the large Filipino community that had real clout in Mont Royal in half with a large part of the community residing west of Côte des Neiges Road shifted to D'Arcy McGee. The large Orthodox Jewish community in the former Outremont riding is also diluted with those living east of Hutchinson moved into Mercier.
Councillor Kovac presented a strong statement from Mayor Brownstein at the public meeting. Natural communities should be kept together in order to give minority groups a stronger voice,” she said. And yet helping natural communities is not what has happened in the commission’s report. We have the worst of both worlds – they are removing representation from the island of Montreal, making ridings bigger, and breaking apart natural communities. Maybe we don’t need the exact same strict equality rules as they have in the United States. But can we at least apply the same fairness as they have Macedonia, or Yemen, or Belarus?

“When you increase the size of a riding like D’Arcy McGee, you weaken the voice of its natural communities. Allophones, Anglophones, Italian, Filipino, Jewish communities and others will no longer have as strong representation as they did when the riding of D’Arcy McGee was of a reasonable size. Further Mount Royal brought one more vote to the National Assembly for these communities and other minority communities. As the largest city in Quebec continues to grow its voice should not be weakened. It’s up to Quebecers to raises our voices, open their wallets, and help challenge in court decisions that hurt our community. I sincerely hope the Commission reverses its decision without the need for a legal challenge.