As we continue to dig out from the biggest snow storm the Montreal area has seen in years, I would like to applaud the work done by the City of Côte Saint-Luc`s Public Works Department. 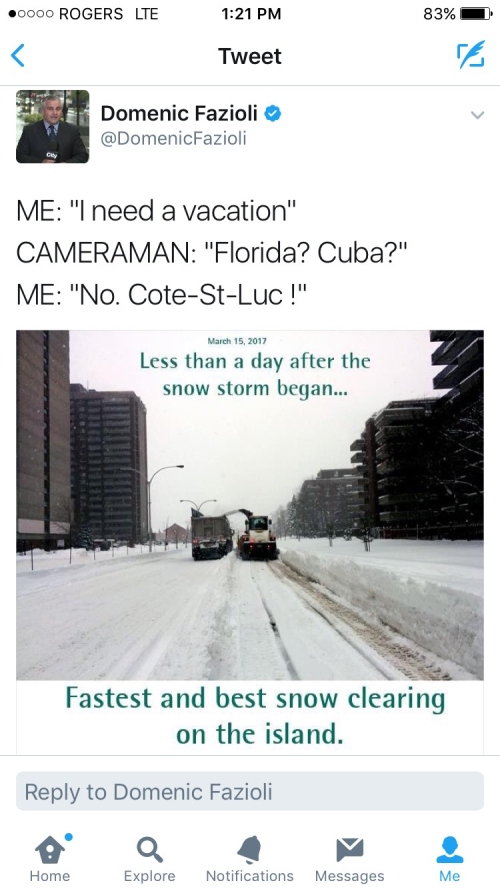 I have received a great deal of kind comments from residents in regards to how well  we  handled the snow clearing.  In fact, most of the Montreal media praised the work we did on the main roads. Please understand that this is a very difficult task and I was among the motorists on the Thursday morning stuck trying to get past the underpass on Cavendish. It was unavoidable and inconvenient, but later in the day all cleared up

“It was an emotional day for many residents,”  Public Works Director Beatrice Newman reported to city council. "Please help us help your residents understand why things appear to be a certain way while in the background, the city is working fervently to provide safe passage-ways in the city.”

The light on Guelph Road broke Thursday morning and stayed green. This meant that Westminster stayed on a red light. Traffic began to build up, employees rushed to help traffic. Public Security  directed traffic and electricians worked on determining and fixing the light. “Things like this happens when there are drastic changes in weather,” Ms. Newman said.

Cavendish Boulevard was congested, southbound. Our snow removal operations provided clear roads for our residents, but unfortunately once they hit CSL Road and Cavendish, they were faced with congestion. NDG kept their side of Cavendish at one lane. Therefore, our three lanes had to squeeze into their one lane. “Et voilà, major traffic accumulation on Cavendish and  CSL,”  Ms. Newman explained.

Fleet was at one lane from our city right through Hampstead. The objective at first is to clear the road with one lane for access. Then approximately 24 hours later, the blowing began. “We cannot start our operations earlier in the morning or traffic issues would be inevitable,” said Ms. Newman. “Only one lane would still be available in this case. We must consider the safety concerns first. This was not a regular snow storm. This was a blizzard with white out conditions, dangerous road conditions and more. We must have patience. Close to 40 centimeters fell and the process to remove it all will not be quick, we must work efficiently​and safely.”

We had five  teams working all day Thursday, five sidewalk cleaners, five loader/blowers, five 10 wheelers, five walkers and two salt trucks remained to follow the contractors as they salted the roads once the contractor blew the snow. Once snow falls on the asphalt  we secure it with abrasives. 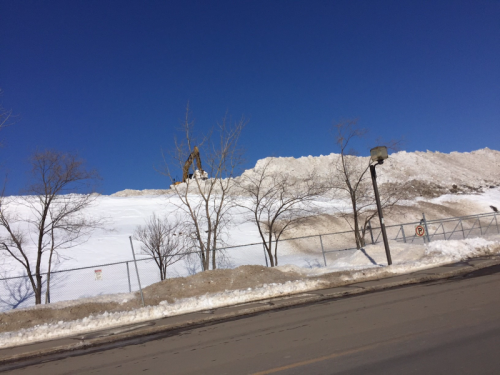 Our snow dump after the storm.

Two teams worked at the municipal buildings and one  worked on our special calls such as  snow blown accidentally on personal walkways, emptying public garbage, etc. One  employee was stationed at the snow dump on Marc Chagall in District 2, which now looks like an Olympic ski hill.

The balance of the areas around Yavne, Merton and Maimonides schools were done on Friday.

We are working hard to do our best in operations and customer service.

“In Public Security, our agents have seen their call volume go up by a factor of 2.5,” explained Public Safety Director Jordy Reichson. “Our agents have responded with professionalism and tact despite trying circumstances, horrible road conditions and lots and lots of snow. They have always kept the safety of our residents at the forefront and I have been impressed by their ingenuity and dedication.

“Our Dispatch Centre has been flooded with calls and complaints about everything from traffic to snow removal to cars blocking driveways. Despite being screamed and sworn at, they have maintained their composure and professionalism.”

Mr. Reichson noted that while  we did not activate our emergency plan, we kept it close at hand. We ensured that our evacuation routes remained as accessible as possible and were prepared to activate elements of the plan as required. “Despite what some residents have posted online, our response has been as strong and efficient as it can be,” he said. “ This was not just another storm, but rather an opportunity for our employees to shine and from what I have seen, all have risen to the occasion.

I for one have always been impressed with the CSLuc snow removal operations...I think they do agreat job!