Author Emma Richler  was a big hit with her audience at the Harold Greenspon Auditorium at Côte Saint-Luc City Hall. She spoke about her book, Be My Wolff, which tells the story of a sister and her adopted brother who share a profound connection.

This free lecture, presented by the  Côte Saint-Luc Public Library, drew a nice crowd. Author as well of Feed My Dogs and Sister Crazy, Richler shared her experience of growing up as the daughter of Montreal's larger-than-life presence, Mordecai Richler, and how that influenced her career choices. Journalist and commentator Anne Lagacé Dowson conducted the interview on stage and questions from the audience were taken at the end. 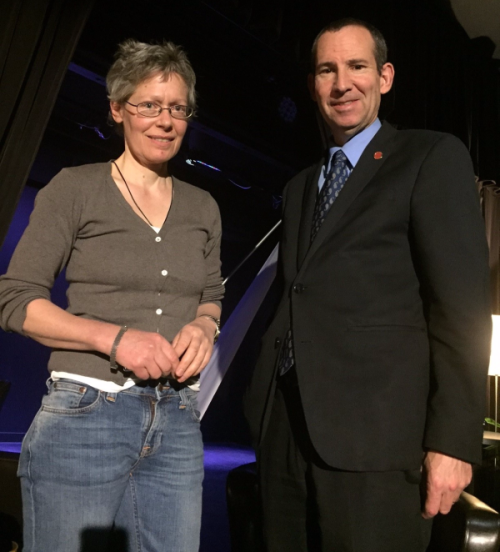 Emma Richler grew up on both sides of the Atlantic Ocean, spending time in London, where she was born, and Montreal. Originally an actress, she turned to the family industry, writing, in 2001. Many of us in the audience were surprised to hear her speak with a strong British accent. But London is where she spent the first 11 years of her life and resides today. When the Richlers moved back to Montreal, she said that her parents underlined the importance of learning French and she did. Looking out in the audience, she saw some former classmates  - people she had not seen in some 30 years.

Richler spoke lovingly about her late dad, mom Florence and siblings Daniel, Noah, Martha and Jacob. Lagacé Dowson asked her about the famous gazebo the City of Montreal refurbished to the tune of $700,000 in her dad`s memory. She responded politely to what has become a  controversial and very much delayed project. Richler clearly had a close relationship with her dad, her voice breaking when speaking about him.

Regarding her mom,  Richler said: "Florence is beautiful and radiant. She looks incredible. I read to my mom by phone. She is a brilliant editor."

Asked by Lagacé Dowson about her decision to quit acting for writing, Richler said that she felt compelled to write and jokingly added that if she ever did return to the screen she'd like it to be as a James Bond girl.

Following the popular talks last year featuring Kathy Reichs and General Roméo Dallaire, our library is  excited to be working again with Paragraphe Bookstore and Lagacé Dowson. Events like these highlight the importance we place on culture in our city.

Paragraphe Bookstore was represented at the event  and sold  copies of Richler's books, which she signed.