St. Laurent Mayor DeSousa tells us he is optimistic about Cavendish extension

I have had the pleasure of knowing Alan for many years, dating back to the days when I was covering St. Laurent as a beat reporter for The Suburban Newspaper and he was attending council meetings as a concerned citizen. There was no question that he would one day be an elected official. 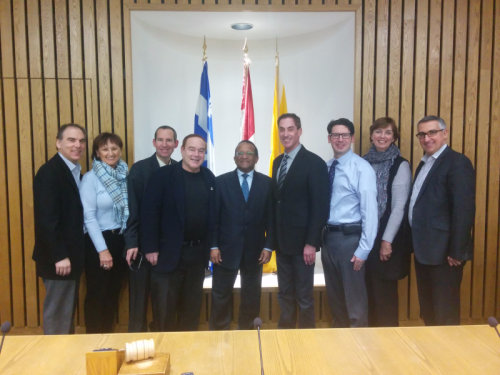 De Sousa served as Councillor in St. Laurent from 1990 to 2001, following which he was elected borough mayor for four consecutive terms. He also sat as a member of the Ville de Montréal Executive for 11 years, and served as Vice-Chair. During these years, he was responsible for finance and administration, economic development, long-term planning, hydraulic infrastructures, environment and parks, as well as for sustainable development.

In the private sector, DeSousa  served as Vice-President, Corporate Finance, at BioChem Pharma, a publicly owned Canadian company. It also worked as a corporate tax specialist in international taxation at Ernst & Young. The Ordre des comptables agréés du Québec awarded him the title of Fellow in 2005. Throughout these years, his social involvement in numerous community and charitable organizations has never ceased.

St. Laurent is a huge borough and DeSousa remains the same approachable fellow I met all of those years ago. Our council often invites political colleagues to meet with us. In the case of DeSousa, we spoke about issues such as transportation and of course the extension of Cavendish Boulevard.

"Cavendish is getting to the point of political acceptance," DeSousa commented. "Right now it seems to be going on the right track. Cavendish is on the rails. We have to keep pushing it."

DeSousa is confident that phase one of the long-anticipated extension will occur in 2019-20 with a connection from Royalmount to St. Laurent.

Word has it that DeSousa will seek the Liberal nomination in the federal riding of St. Laurent- Cartierville, recently  vacated by Stéphane Dion.