Harvey Fox, a resident of a 220-unit apartment complex on Adalbert Ave., says there is a tenant in
his building who re- fuses to leash his problematic dogs, but police won’t accept citizen-captured
video footage, witness testimony or photo- graphic evidence as an enforcement tool. “He just
lets them run wild,” Fox told the Côte St. Luc city council on January 23, describing the dogs as
pit bull and husky mixes. He said that he has made numerous complaints to Public Security and
police, but in order to enforce the city’s leash by-law “they need to see it them-
selves.”

Fox said the man’s dogs have attacked his own on January 4 and when he tried to intervene “like a
rag in a thunderstorm, I was tossed around.”

Mayor Mitchell Brownstein noted that this type of incident can be reported to po- lice, but, Fox
replied, there were no dam- ages. He said the problem is that police are waiting until someone gets
hurt rather than responding to complaints.

The man was caught once, said Fox, but it has not deterred him from walking his dogs without a
leash. It has continued to be a problem, he noted, since last spring. Fox said he tries calling 911
and Public Security when he sees the man walking his dogs off leash, but “they don’t want to deal with it.”
Fox admitted that it is a difficult case to enforce, but it would be a lot easier if police could,
at the very least, rely on video footage captured by citizens.

Brownstein said he will look into boost- ing patrols around specific times. Brown- stein said he
will have the city’s director of city services look into what can be done. He said the city will
look into what type of evidence is accepted and “we will work to- gether with you.”

Councillor Mike Cohen, responsible for animal welfare in the city, thanked Fox for bringing the
problem forward. He said there was a similar issue on Rembrandt Ave. where the dog owner was
finally caught and ticketed. It worked for a while, but then the owner was eventually seen walking
the dogs off leash again.

“This is unacceptable,” said Cohen, call ing it a typical example of the pet owner being the
problem, not the pet. “The owner has got to take responsibility. Please continue to let us know and
I send that message out to anybody in the community who is experiencing a similar situation be-
cause most dog owners in Côte St. Luc are very responsible.”

Here is some news on construction in the Quartier Cavendish development, much of which is my own District 2.  Councillor Glenn J. Nashen's District 6 covers the properties on Kellert.

The 68 townhouses and 16 semi‐detached homes are now all complete.

There are 31 single family homes: 24 are completed, with minor finishing touches/landscaping outstanding on some; four others are under construction and progressing well; one lot has been approved in principle and construction should begin in spring 2017; and two lots still face a design review from our Planning Advisory Committee (PAC) and must then go through the permitting process. 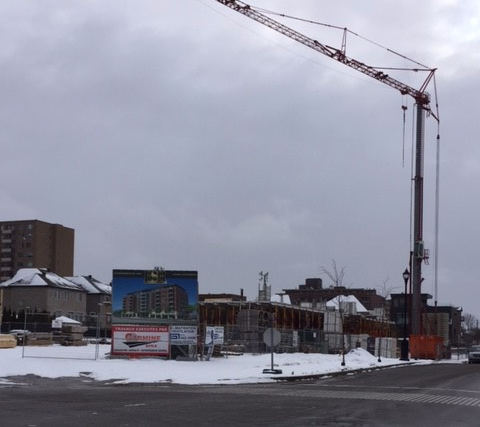 The mixed use building under construction on The Avenue.

The mixed use building of 90 units on six stories, plus a penthouse and some commercial establishments on the main floor, is moving along. The underground parking structure is complete while the back filling of the foundations is also nearly done. The builder, the BSR Group, plans on continuing construction through the winter in hopes of completing this project by the end of summer 2017. Our Urban Development Office continues to work closely with the builder to keep some nuisances to residents of Park Place to an absolute minimum.

In our year end permit statistics, we experienced yet another surprisingly big year of construction in the city. While we were expecting 2016 to be busy, construction estimates for 2016 were actually the second highest in our history (over $60 million  behind only 1987, a year when several high rise towers began construction in the same year). These numbers are compiled from estimated construction costs before projects begin (at time of permit issuance) so they are only estimates, but they are an accurate indicator of how much construction is taking place in our city. Permit fees are based on this estimated value and is therefore linked directly to generation of revenue for the city and this list does not include “smaller” permits such as tree cutting permits, tempos and signs. Promising news for certain.

Mourning the passing of Seymour David

I used to joke around with Seymour David that he truly must have either been cloned or a triplet,  for it seemed ever corner I crossed, there he was.

Seymour was also my constituent. For the past dozen years he resided on Rembrandt Avenue, taking care of his elderly father. His move was precipitated by a divorce, but he always told me how close he was with his two children and his ex-wife. 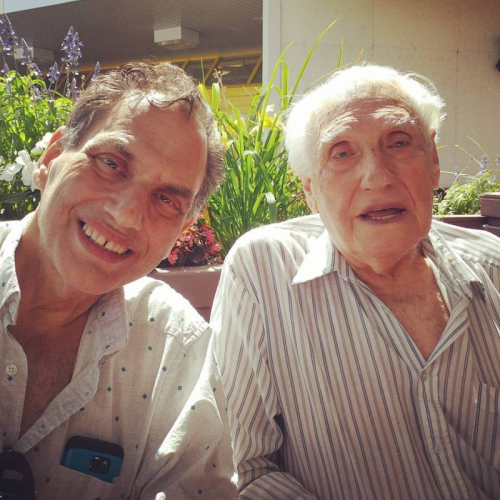 I was very saddened to learn of Seymour’s passing. He had spent the past several months in intensive care at the Jewish General Hospital due to non-alcoholic sclerosis of the liver. While he told everyone who would listen how optimistic he was that he would survive this horrible ordeal, that was not to be. Now his friends and family are left to mourn.

Seymour was adored by the students he assisted daily in the EMSB Alternative School network. He loved living in Côte Saint-Luc and was particularly proud of his presence with the local Dramatic Society.

There is one memory I have of Seymour which illustrates the many nice things people are saying about him. About a year before I first ran for city council, around 2004, I attended a Borough Council meeting in Hampstead. At a certain point I decided to leave. Seymour was there (of course he was) and followed me out. I did not realize it at the time, but I had actually walked in through one entrance and out from another. As I frantically looked for my car, Seymour stuck by me. I was convinced it was stolen. Seymour actually walked the block with me. We even checked side streets, hoping someone might have just taken a joyride. I called the police. Thirty minutes later, they still had not shown up. I told Seymour to go home, that I was fine. But he insisted on staying. My mother in law and father in law soon arrived as a rescue mission. I jumped in the back seat, thanked Seymour, and as we turned the corner there was the car. Yep, near the door I had entered. Whenever I saw Seymour after that I remembered his patience and empathy.

Like me, Seymour ran for city council in 2005. He did not win, but enjoyed the experience. When the newspaper reported the final result, they called him David Seymour instead of Seymour David. We all had a good laugh.

Our mayor, Mitchell Brownstein, was a very close friend of Seymour`s. He is crushed by his passing. “Seymour was a dear friend since our early adult years,” said Mitchell. “His son Priam, aged 22, performed in our Dramatic Society shows with his dad and is studying music. His daughter Evara, aged 26, worked as a lifeguard, volunteers at EMS and works at dispatch. She is in her final year of law school at U of M and missed this semester's exams due to the situation with her dad. He was an incredible dad, a devoted son  and a loyal friend.”

Shiva is in Chalet #1 at Pierre Elliott Trudeau Park on Mackle Road until Thursday, January 19. Rest in Peace Seymour. You left us way too early!

District 2 resident and noted dentist Dr. Harry Rajchgot will be the guest speaker at the CSL Men's Club on Thursday, January 12 (9:30 am) at the Aquatic and Community Centre on Parkhaven Avenue.

Dr. Rajchgot  has practiced full-time in Montreal, both in private practice in NDG and as a staff member of the Montreal Children's Hospital (now part of the MUHC),  for over 35 years. For 15 of those years, he was on staff and head of the Dentistry Department at the Mackay Centre for Deaf and Handicapped Children, and has taught in McGill's Dentistry Faculty and in the Dental Hygiene Program of John Abbott College. 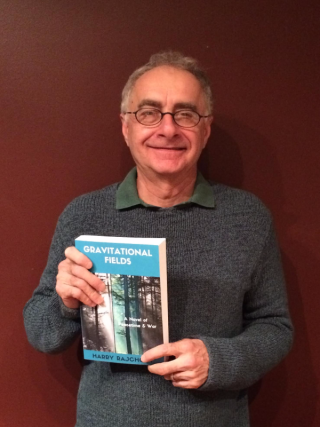 It took more than two decades, but Dr. Rajcgot published his first novel, Gravitational Fields, most recently. This is the epic fictional story of a family of Holocaust survivors who, after the war, live first in Israel and later in Montreal. He will be speaking about his book, which he began to write over 20 years ago, after his father's death in 1995, and about his own family's real-life history, their journey from pre-war Poland to Montreal.

I have read the book and frankly could not put it down.

Pik Nik shuts down at the CSL Shopping Centre

Ever since I can remember there has been a Pik Nik snack bar at the Côte St. Luc Shopping Centre. Located by the IGA, Junior Booty, the SAQ and the barber shop, it's a snack bar surrounded by stools and some tables on the side. Hot dogs have traditionally been the most popular items there. They also make sandwiches, some other snacks and serve breakfast.

A few days ago the owner, Khang, was forced to shut down operations. "The owners of this centre want too much in rent," he told me. "I cannot afford to stay, so I closed."

As Khang connected his things, regulars came the counter and stared ahead in shock. "What do you mean you are closed?" one heartbroken lady remarked. 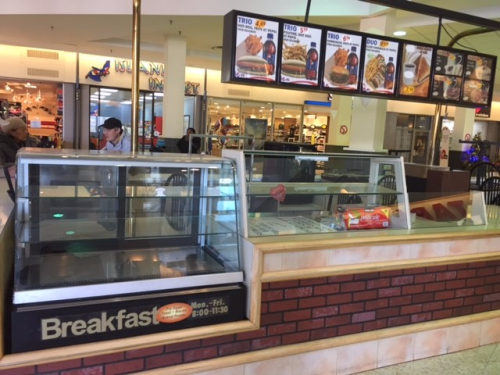 Will the Centre get someone else to run the operation and bring Pik Nik back to life? Until then the only places left to eat are the Subways,  Muffins Plus, a sushi stop and Dominos Pizza. The IGA food counter makes some pretty good prepared meals and if you ever go there around lunchtime they drum up some good business. Who remembers the days when the Ben Ash Deli enjoyed a popular following?

As for Khang, who ran the Pik Nik with his wife, I hope he is able to bounce back somewhere else.