The Côte Saint-Luc Men`s Club sure knows how to throw a party! Their annual gala is always the highlight of the social season for some of our most outgoing senior citizens and the 2016 edition was no exception.

This 29th annual gala was held at the Gelber Conference Centre. It was a sold out affair, with more than 400 people in attendance. District 2 resident Joe Presser served as the gala chairman, working with committee members Nathan Brotman, Kenny Bessner, David Haltrecht, David Gandell, Peter Sternberg, Mannie Young and Syd Kronish. Syd is the Men`s Club president and also a District 2 constituent of mine. 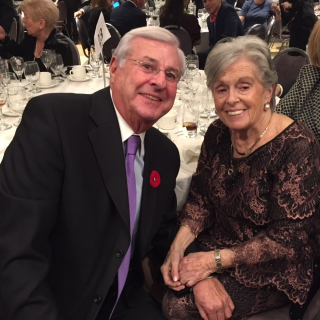 Mayor Mitchell Brownstein and members of city council were in attendance as was Mount Royal Liberal MP Anthony Housefather and D'Arcy McGee Liberal MNA David Birnbaum. His predecessor, Lawrence Bergman, was on hand as well. Lawrence maintains a very steady presence at community events. There was entertainment by Greg Innis on the keyboard an magic with Jody M.

I always enjoy this evening, which begins with hors d'oeuvres and continues with a full course dinner, open bar, desserts and some nice presentations. It was nice to see many couples I have known for years. Joe and Isabel Presser, Morris and Essie Liqournick , Bernie and Rhona Rapp, now retired pharmacist (after 60 years) Arnie Smith and wife Francis, Kenny and Rhoda Bessner, Aaron and Esther Spector, Manny and Charna Young, George and Phyllis Nashen, Allen and Shirley Rosen...the list goes on.

This year's Man of The Year was Bill Surkis, the Men's Club vice-president who sadly passed away very suddenly over a week ago. He was 77. Bill enjoyed a distinguished career as a pedagogue, head of the Montreal Holocaust Memorial Centre and B'nai Brith Canada. He suffered some adversity in recent years and the death of  his devoted wife. The Men's Club provided him with an opportunity for a fresh start. Many of his family members were on hand to accept the honour posthumously.  Kronish also paid tribute to the late Seymour Kleinberg, a sweetheart of a gentleman and a two-time Mann of the Year, who also passed away recently. 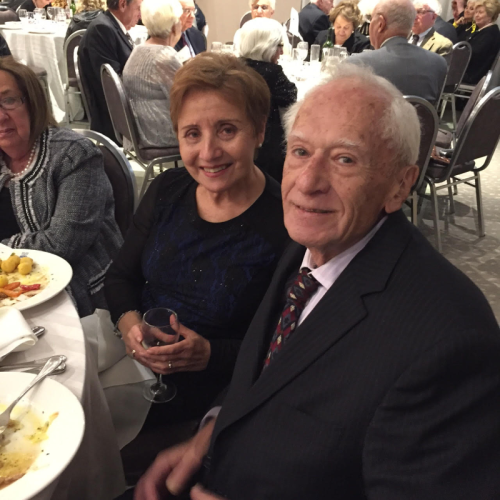 Housefather said that he is so proud of the Men's Club that he spoke about it in the House of Commons. "I sit on the Liberal Party Seniors Committee," he said. "I always use this club as an example of what we should be doing across the country."

Birnbaum made a declaration in the Quebec National Assembly last month. "Aging is not lost youth, but a new stage of opportunity and strength," he said, quoting legendary feminist leader Betty Friedan. "Together, you have created and sustained a sanctuary for fellowship, debate, exercise - mental and physical - community charity and, ultimately, the meaning and connection that makes life so worth living."

Birnbaum also hinted that he may be bringing Quebec Premier Phillipe Couillard to speak to the Men's Club in the not too distant future. 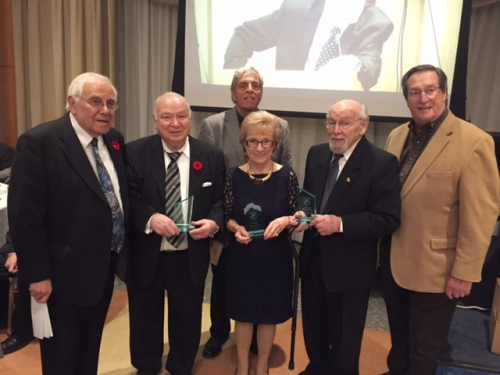 The Men's Club honoured three individuals for their contributions: Jimmy Indig, Phil Goldberg and Pat Kutz. Yes Pat is a lady, but for the past decade she has used her talents in calligraphy to make the place cards for guests as successive galas. She was unable to attend, but her sister Ellie Kurtz represented her. 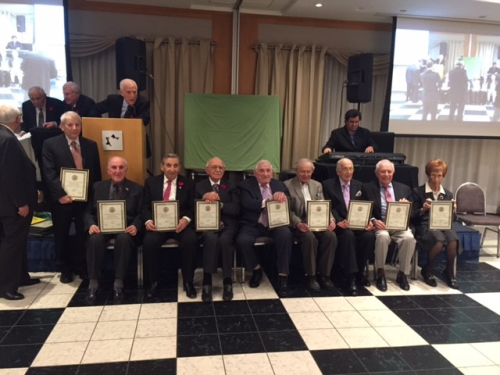 To conclude the evening, the ever so talented Phil Kurtz presented a beautiful painting to the Men's Club.

We are very proud of this group.Bravo to all! 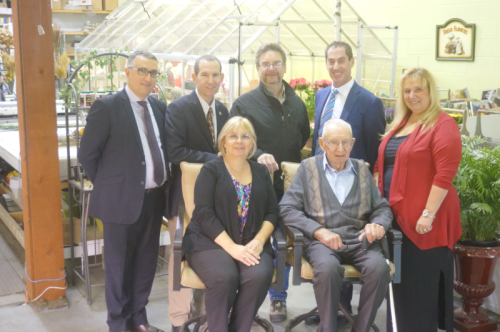 New plans were approved for the two 12 storey high rise buildings to be built on Marc Chagall Avenue near Mackle Road. Initially the developer had planned to sell condominiums, however a new concept of luxury rental condominiums with extensive amenities is planned. Trantor Realty will develop the project with Jadco construction.

Jadco construction, is an established luxury builder. Among the latest projects of Jadco is the Quintessence as well as the Paton 1, both high end successful luxury condominiums projects. We expect there to be 264 units. Our Planning Advisory Committee has requested at least 400 parking spots.

I spoke to their representative whom estimates that a shovel will go in the ground in 2017.

This adds to the District 2 building boom, which already includes a new rental apartment facility under construction on the Avenue in the Quartier Cavendish area and the completion of the remaining homes in the area.

The land is zoned multi-family. About a decade ago there was a plan by another company to construct two buildings at this location. They would have been 18 storey high condos. When that ownership group dropped the project, council conducted some rezoning and much to the delight of the neighbouring condo owners at Le Rothchild and Le Marquise, we lowered the density to 12 storeys. 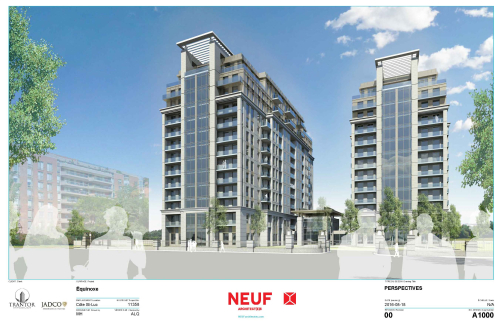 A proud day in Côte Saint-Luc: New park to be named after Elie Wiesel

The City of Côte Saint-Luc will name its new park at the corner of Cavendish Blvd. and Kildare Rd. after the late Elie Wiesel, a Holocaust survivor and author who fought for peace, human rights and simple human decency. 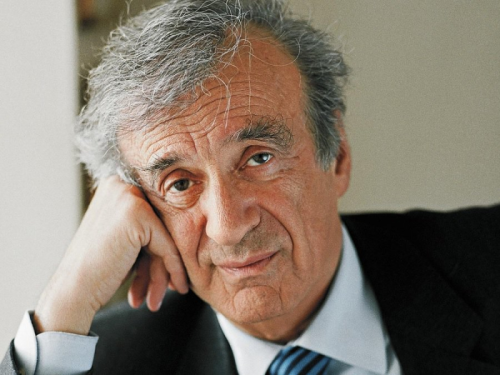 “Côte Saint-Luc has one of the largest populations, per capita, of Holocaust survivors in the world,” Mayor Mitchell Brownstein said. “It is highly appropriate to honour Elie Wiesel this way posthumously. After he died, it was our own Beth Israel Beth Aaron Congregation that held a Montreal-wide memorial.”

A formal dedication ceremony for the new park will take place in Spring 2017. Over the next few months, meetings will be held with the Montreal Holocaust Memorial Centre and community leaders to ensure that the park tells a story for what Wiesel and other human rights activists stood for.

As the city councillor  responsible for naming rights, I was approached by a number of people after Wiesel died with the suggestion that the city honour him. I believe that by doing so at the intersection of two of our most important streets makes a lot of sense. Elie Wiesel was a champion for people of all religions. We are proud of the fact his legacy will live on in our community forever.

This is also in my very own District 2.

Born on September 30, 1928, in Sighet, Romania, Wiesel pursued Jewish religious studies before his family was forced into Nazi death camps during the Second World War. Wiesel survived, and later wrote the internationally acclaimed memoir Night. He also penned many books and became an activist, orator and teacher, speaking out against persecution and injustice across the globe. Wiesel won the Nobel Peace Prize in 1986. He died on July 2 at the age of 87.

Work on the park will not be complete until the beginning of November.

It is very important to keep our sidewalks in good condition.

During my walkabouts in the District I always keep a close eye on watch sections are in disrepair. In the case of Marc Chagall Avenue and Kildare Road, there were certainly some trouble spots.

Not every problematic sidewalk can be fixed. We have a very long list of those which require repair. This year Marc Chagall and Kildare were chosen. In the case of Kildare, there is a lot of foot traffic. 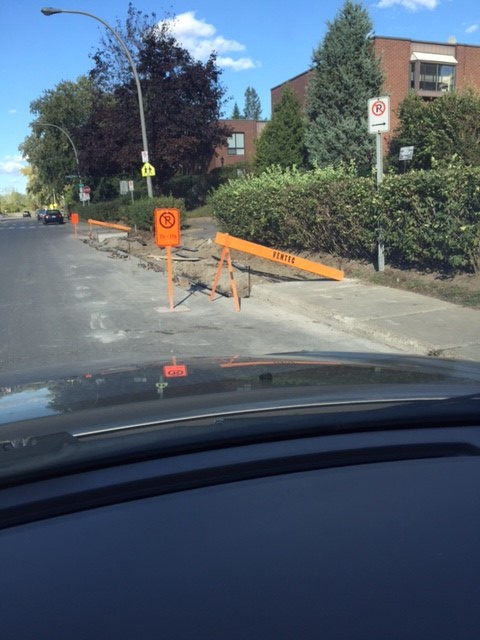 Tashlich (תשליך) is a ritual that many Jews observe during Rosh Hashanah. "Tashlich" means "casting off" in Hebrew and involves symbolically casting off the sins of the previous year by tossing pieces of bread or another food into a body of flowing water.
The city  of Côte Saint-Luc wishes to let people  know that the following bodies of water are or will be functioning in time for Tashlich on the first day of Rosh Hashanah:
Unfortunately, due to the renovations at Trudeau Park, that lake will not be available. 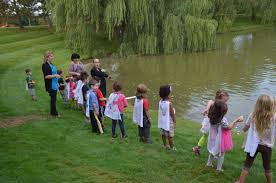