Two men who made very significant contributions to Côte Saint-Luc passed away this week.

Solly Levine was a fixture on the local hockey and baseball scene for decades and I had quite a history with him. Seymour Kleinnerg was the ultimate gentleman and so much revered by the CSL Men`s Club that they twice recognized him as Man of the Year.

Solly passed away at the age of 97. Virtually from the moment I got involved in the amateur sports scene he was presence. Now Solly was not really an athlete, yet he was a true manager of people. So when he stood behind the bench of the Côte Saint-Luc Cougars with his co-coach Kenny Saxe, everyone respected his decisions. He knew just how to send out the right line combinations, which players to select at the start of each season and how to deal with the parents. 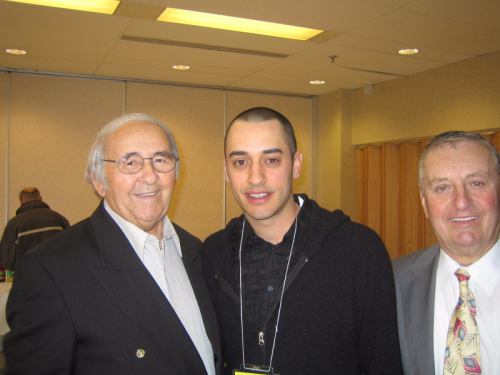 It was in management, though, where Solly found his true calling. In hockey, he ended up becoming the general manager of the Westluc Saints Midget AA team while in baseball he did the same for the Côte Saint-Luc Avengers. Eventually, Brian McKeown saw Solly’s true potential. McKeown was the owner of the Lac St. Louis Midget AAA Lions, which developed many NHL stars. He brought on Solly as his general manager and for a considerable period of time the man known to friends as “Dinky” became a living legend.

A few months ago I bumped into former NHL star Martin Lapointe, now the head of player development for the Canadiens. He played for the Westluc Saints and the Lac St. Louis Lions. “How is Solly doing?” he asked.

Solly loved seeing his name in the paper. He’d often call me and say, “Hey Michael, give me a little write up next week would you?”

I vividly remember the first Cummings Centre Sports Celebrity Breakfast I helped organize in 2005. Former Hab Mike Ribeiro was our guest. Solly and his friend Jack Dunn were in our VIP room. The moment Ribeiro saw Solly, he raced across the room to greet him.

Seymour grew up in Outremont, was educated in the public school system and enjoyed an outstanding career in football as a defensive linebacker. After senior matriculation he entered the men’s clothing manufacturing sector with his father and uncle. He soon moved into retail in rural Quebec, which made him fluently bilingual, after which he returned to Montreal as a manufacturer of ladies wear until his retirement. He married Renee in 1953 and was blessed with three children - Ellen, Sharon, and Carl. Seymour is the proud grandfather to Ryan and Benji. I got to congratulate Seymour in 2009 when he was named Man of the Year.

Always community-oriented, Seymour was active in the Young Israel of Chomedey Congregation and Combined Jewish Appeal and the Mount Sinai Hospital Sadly, his wife passed away in 1988. He shared his time with Rhoda Baskin, a former executive-secretary in Neurology at the Jewish General Hospital, herself a widow and now, retired. They became inseparable companions these past 17 years, enjoying club activities as well as each other’s children and grandchildren.

Seymour was just about one of the friendliest men you can ever meet. I always enjoy his company and was proud to have him as a constituent on Sir Walter Scott Avenue.

Our sympathies go out to both families.