The City of Côte Saint-Luc renamed a section of Hudson Avenue to Place Sidney Shoham Place at a beautiful ceremony on Sunday, September 25

Several hundred people  turned out on a nice sunny day. Rabbi Shoham passed away on September 21, 2015, at the age of 86. He retired 10 years earlier as the founding rabbi of Beth Zion Congregation after having served in that role for 50-plus years. Rabbi Shoham continued to remain very active in synagogue life and in fact, passed away only hours after attending the synagogue’s annual Cantorial Concert, of which he was most involved. 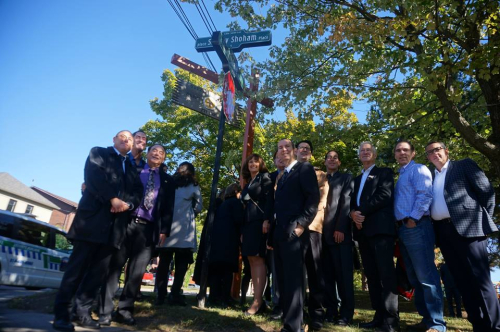 As the city councillor responsible for naming rights, I was approached last winter by Beth Zion president Earl Rosen about honouring Rabbi Shoham’s memory.  We do not often rename streets, but in this case the decision was a natural. Beth Zion is no longer located at 5740 Hudson Avenue, but rather 1 Place Sidney Shoham Place.  The Hebrew Day School is now at 5 and 9 Place Sidney Shoham Place. 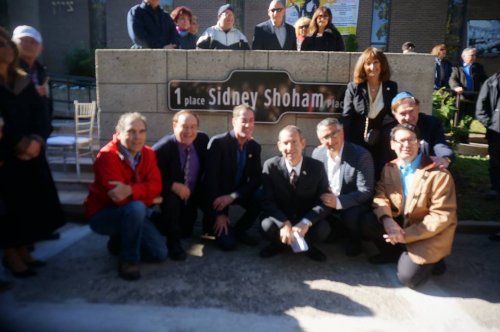 When I went to district Councillor Allan J. Levine, Mayor Mitchell Brownstein and the rest of council, the name change was agreed upon immediately.  I would like to thank our Director of Public Affairs Darryl Levine and Director of Public Works Beatrice Newman for their work behind the scenes.

At the ceremony we heard words from Mayor Brownstein, Liberal Member of Parliament for Mount Royal Anthony Housefather, Liberal Member of the National Assembly for D’Arcy McGee David Birnbaum, Rabbi Boruch Perton, Earl Rosen and Linda Lieberman, Rabbi Shoham’s eldest daughter. She joined her sisters Donna and Mindy and mother Jewel in the unveiling of the civic address and street signs. You can watch the entire ceremony right here.

Born in Baltimore, Maryland the son of the late Rabbi Yechiel and Rebbetzen Ethel Shoham, Rabbi Shoham attended the Talmudical Academy of Baltimore and then went to Mesivta Yeshiva Rabbi Chaim Berlin in Brooklyn, New York. While studying at the yeshiva, Rabbi Shoham attended Brooklyn College at night and graduated with a Bachelor of Science degree majoring in psychology. Later, he attended graduate school at New York University, School of Psychology and continued his studies in Montreal at the Allen Memorial Hospital – McGill University where he furthered his degree in Pastoral Psychiatry.

Rabbi Shoham arrived in Montreal in 1955 to visit his brother Gilbert, who was Rabbi of the Beit Hamidrash Hagadol Synagogue on McKenzie. While here, he met with an enthusiastic group of individuals anxiously waiting to build a new community in the western suburb of Montreal. After discussions with the committee, he was quickly hired as the Rabbi of Beth Zion. Over the years, he had been active with nearly every Jewish organization in the city, notably Combined Jewish Appeal, B’nai Brith and State of Israel Bonds and the founder of the much needed Miriam Home.

“After the idea was conceived for this street renaming and address  change,  time seemed to take forever  to  arrive at this momentous occasion,” said Rosen. “We at Beth Zion have had many momentous events take place over the years.going from  the house to the auditorium,then the sanctuary, torah dedications, the 36th and  50th  anniversary celebrations, the cantorial concerts and on and on  to me.”

Our newest member of city council, Sidney Benizri, was wearing his other hat today as executive director of Canadian Magen David Adom for Israel. Thanks to the generosity of  Judith and Harry Rossdeutscher and Fagey and  Simon Rossdeutscher a brand new ambulance was dedicated in Rabbi Shoham’s memory. It was on display at the ceremony.

I  was honoured to know Rabbi Shoham almost all of my life and  I am so proud to play a role in further ensuring his wonderful legacy in our city.