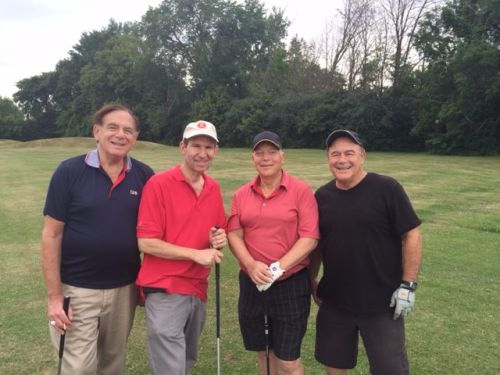 Sam Goldbloom, myself, Harvey Levine and Allan J. Levine on the course.

Last December I got a call from Harold Cammy, Côte Saint-Luc`s veteran manager of Parks and Recreation. Harold has been with the city for 42 years and I have worked with him on many projects for one reason or another over that time.

Harold, section manager Alvin Fishman and my council colleague Sam Goldbloom and I work together each summer on the Côte Saint-Luc Golf Classic at Meadowbrook. And yes, work actually begins more than six months prior to tee-off time.  Harold had an idea for an honouree, that being Pierre Brunet. The franchisee for many McDonald`s Restaurants, including two in Côte Saint-Luc, Pierre has always been there to support us. Sam and I brought the proposition to council and it was approved before anyone could say “Big Mac.” 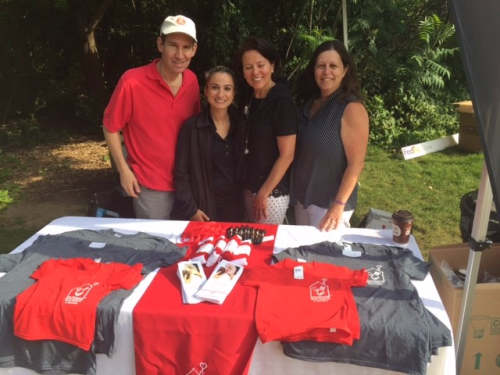 The date for this 37th annual event was Thursday, July 7. Let the record state that we have never been completely rained out. Based on the forecast, we were pretty worried as thundershowers were predicted all week. That remained the case even up until the night before. But Mother Nature is clearly a CSL golf fan and the weather conditions could not have been better. Close to 100 golfers hit the beautiful Meadowbrook course for this nine-hole best ball affair.

My foursome included Councillor Goldbloom, Councillor Allan J. Levine and B’nai Brith Canada Quebec Region Director Harvey Levine (Allan’s brother). I golf once a year, so I am no Jack Nicklaus. But I do enjoy the experience. 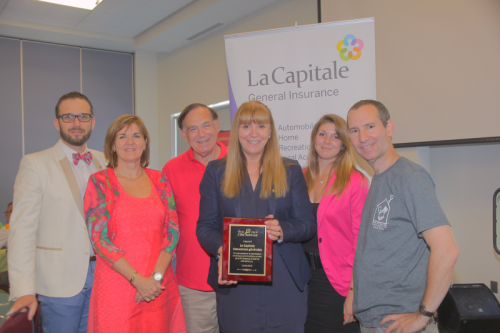 The Routtenberg family from Freemark Apparel Brands sponsored the Hospitality Room and provided some door prizes from their Bench label. McDonald’s Canada was also a sponsor. Paul Steinberg of Silver Star Mercedes arranged for that type of luxury car to be available for a month if someone got a hole in one. That did not happen. But as part of our raffle, Justin Burnham of our Library won the car for a weekend.This year’s title sponsor was La Capitale General Assurances, represented by Murielle Lafond, Sylvie Boivin, Tony Azar and Priscilla Bourgeois. They will be offering employees of the city special deals on insurance packages and encourage residents to inquire as well. Officials set up a kiosk and a lot of people came to talk to them.

We always invite our local Police Station 9 Commander to golf with us. This year it was Jean O’Malley. He was joined by his predecessors, Marc Cournoyer (now at Station 3 on the West Island) and Sylvain Bissonnette (now at Station 8 in Lachine). Councillor Ruth Kovac completed their foursome. 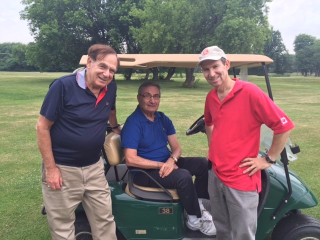 Sam and I with Ron Yarin.

Veteran Côte Saint-Luc volunteer Ron Yarin was back as the honourary chair of the event. Mayor Mitchell Brownstein, Councillors Glenn J. Nashen, Sidney Benizri, Steven Erdelyi and Mount Royal Liberal Member of Parliament Anthony Housefather were also on hand.   Councillor Herb Brownstein from Dollard des Ormeaux participated as well. Many retired employees from the city joined us, which is always nice.  Of course, Cammy could not have done this all without the key help of Alvin, Maurizio Giobbi and other staff. Alvin and Mo were at the golf course setting up at 5:30 am. Our friends from McDonald’s greeted everyone with hot coffee and delicious danish.

There was a beautiful link this year between honouring Pierre Brunet and stepping up our commitment to Manoir Ronald McDonald. This is a temporary home away from home for out-of-town (more than 70 km) families of children with critical illness who must travel here for medical treatments. Traditionally, Côte Saint-Luc directs proceeds from its annual Winter Carnival events to this facility located next door to Ste. Justine Hospital via a pancake breakfast. This has resulted in donations of close to $50,000 for the Manoir. The Côte Saint-Luc Men`s Club announced they had raised close to $1,200 in less than three weeks for Le Manoir. Cammy added that through a variety of other clubs, an additional $2,200 was obtained – bringing the total to $3,400. We also helped raise more awareness, all of which left Manoir executive director Jacqueline Mallet quite thankful. 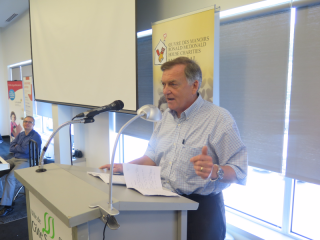 Pierre Brunet`s  personal connection to Côte Saint-Luc came with the opening of his first franchise on the border at CSL Road and Walkley in the early 1990’s. Always community minded, while still holding onto to just one franchise,  Pierre demonstrated his generosity by donating $5,000  to the construction of the first water play facility in Côte Saint-Luc located in the north end of Pierre Elliott Trudeau Park. When Pierre was approached 10 years ago about supplying pancakes for a winter carnival pancake breakfast he came through once again and over that decade he has donated more than 10,000 pancakes to the winter carnival. This was a key factor in the $50,000 we have raised for them. Throughout his tenure Pierre has donated thousands of dollars in free meal coupons, coffee coupons and year of cheers for various sports and other cultural programs in the community. And keep in mind he actually operates 17 franchises across the city. We were pleased to see him joined by his colleagues Peter Stamatopoulos, John Liontis and Lina Lavasile.

We had a surprise for Pierre—a giant cake shaped like a hamburger. TCBY also supplied us with delicious yogurt. Pierre is presented with his hamburger shaped cake.

This year`s guest speaker was CSL resident Matthew Ross, the host of Game Points on TSN 690 and the founder of Expos Nation. Matthew is playing a very active role in trying to get professional baseball in the city. His address was very well received and many people had questions for him. Look for him to appear at a future Men`s Club meeting. Matthew was pleased to mingle with another special guest, legendary broadcaster Dick Irvin. 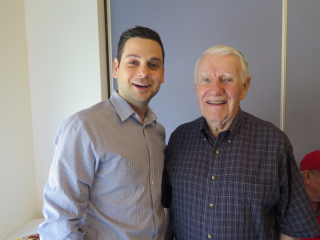 Thanks to the efforts of Alvin, we had many door prizes. It was an action-packed day, which went longer than any banquet we have held yet. Nobody was complaining.

Finally, a word of appreciation to Toby Shulman for leading our volunteers and Michael Johnson and his team at Meadowbrook, a true jewel in our midst.

Here are all of the photos taken by Rami Negev during the day.

And here  is the video taken by our very own Darryl Levine.